Home Cribs Where Our Baby Caught Her Hair on Fire: Family Review of the... 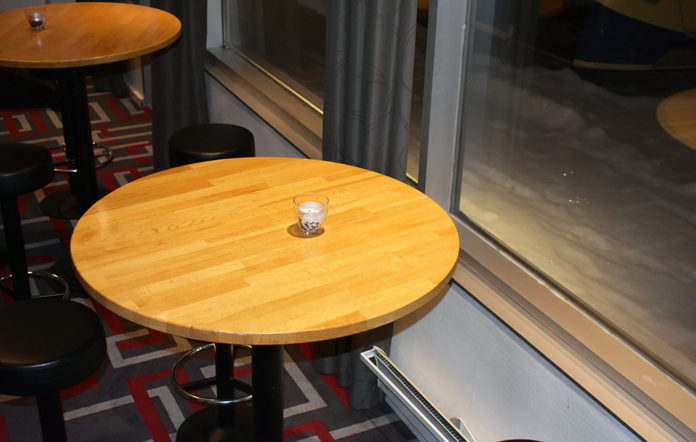 Nothing happened according to plan this trip to Norway. And I mean that in the most literal sense. When we arrived at the Scandic Hotel, chosen because of how often we’d seen it pop up in search results in Google and we just wanted a sure thing, it was early in the morning after our Hurtigruten cruise. We couldn’t check in to our room yet, and we were exhausted. No, we were drained, spent, and used up. We camped out in the back lobby with the kids and laid down on the couch. There were no other people around so we basically let the kids have full run of the banquet sized two tiered room as we faded in and out of sleep.

That is, until we heard Eclair running around screaming bloody murder and saw that the back of her head was covered in flames. That’s what you call expert parenting. Yes, we knew there were candles. They were tiny candles in small eight ounce jars with the wick so far down to the bottom you couldn’t reach it with your finger. We didn’t think anything could happen. Due to our stellar parenting skills, we forgot anything is possible when it comes to rambunctious and sleep deprived toddlers and mischievous older brothers and sisters.

Apparently, she had moved the candle from the table to the chair and was dancing around with it. Of course she was. What else would you do with a small table candle? The flame must have shifted due to being turned around and escaped the confines of the jar. The little hair our poor baby had to begin with was totally singed. Gabriel quickly patted the fire out with his hand and I caressed her head until the embers ceased creeping up her scalp.

On the plus side, she learned her lesson about playing with fire. As did we.

To be clear, her scalp was not burnt in any way, only her hair. No permanent harm was done. We do not hold the Scandic responsible, nor was this their fault in any way, nor are they liable for the absolute zero harm that came to her.

The Scandic and Radisson Blu hotel chains are the foremost hotels in the country of Norway. You will find one of each in every city center, and every bus you take will stop at both of these highly popular hotels. The Scandic is the more affordable version of the two, and offers a ton of amenities.

One of these amenities included the best rated hotel breakfast in country several years in a row, including 2017 again! It was vast and impressive, though we weren’t as impressed as we might have been after eating on the Hurtigruten. The hotel also offered a good sized pool, and both a wet and dry sauna. Plus, it is located right in the city center in close proximity to several restaurants, a grocery store, and convenience store.

There are no laundry facilities on the property which made us instantly regret not using the Hurtigruten’s free washers and dryers as we stomped around on our laundry in the tub. We actually got this idea from the Bucket List Family! It’s works amazingly well. There is also free wifi.

Our room had a beautiful view of the mountains, and though it didn’t have a refrigerator we were able to makeshift one out of the windows by propping it open and placing our Jule Brus and bottled waters in the cracks. It worked better than a fridge! The room had a bunk bed and two twins pushed together. It was a small room, and we were definitely feeling it after being sequestered during the polar night where everything was closed for two days.

► For Kids: The Scandic is a popular and great choice for families traveling through Norway. We tried both the Radisson Blu and the Scandic, plus a few airbnbs during our time in Norway. For the value and the price, plus the surety of knowing what you’re getting, the Scandic is our top pick.

Where have you stayed in Norway? Did you love it and why? We’d love to hear more about your choice and where we should head next time!

► Nap-Time Version: Our family hotel stay at the Scandic in Kirkenes, Norway.

Read more about our exciting adventures in Norway including flying on SAS in the cockpit, Husky Dog Sledding and witnessing celestial splendor seeing the Northern Lights!