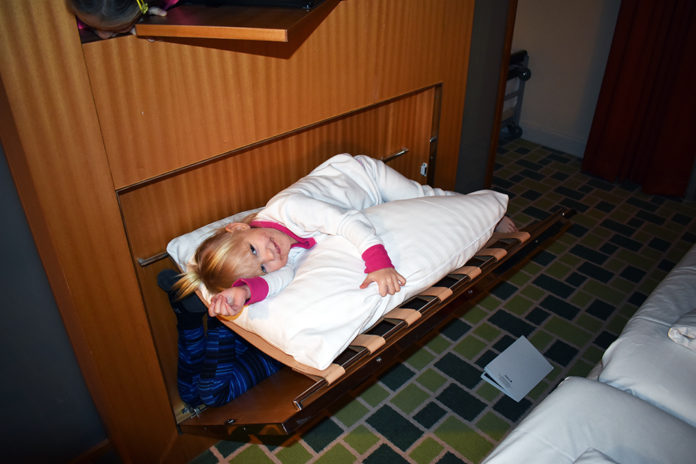 Flights didn’t look good departing from Oslo to Amsterdam on December 30 but if nothing else we are risk takers. What do a couple too few seats even mean to a standby traveler? Anything can happen. After all, we made it on a flight from Kirkenes to Oslo that morning when the odds were against us, and not just that, but I got to fly in the cockpit! So while Gabe was navigating the line to check in for the next flight to Amsterdam with our ridiculous amounts of baggage, I was holding the baby while trying to use my phone to look available flights – when what should happen? Eclair knocked it out of my hands and it fell on the concrete floor face down – breaking the digitizer! It was black!

We were done. We were hungry. We were exhausted. We couldn’t think straight. With my phone broken I couldn’t use my log in to look at flights let alone crew hotels, and it was clearly a sign that we should call it a day. We looked around the airport and saw the adjoining hotel our SAS Airline friend had told us about when we missed our initial flight to Tromsø. We picked up our things and headed over to the Radisson Blu Hotel Oslo Airport Gardermoen.

Oh, but it wasn’t that easy. It never is. The nightly rate was over $300 dollars. The Radisson Blu’s dot the Scandinavian countryside. We saw these, and the Scandic hotels, everywhere we went. Their fluorescent blue lights beckon weary travelers promising warm beds and spacious rooms. We kindly begged the front desk clerk to lower the price, but she was unrelenting. We tried to find a cheaper price on any discount site online to no avail. We had no choice but to give in. When Gabe went back up to book it, however, he got a different clerk who was able to knock $40 off the price, and still include breakfast for our entire family, while upgrading us to a junior suite. Thank you!

The suite was huge! And it was fabulous after so many roadblocks over the course of our eight days in Norway. In addition to the two twin beds posing as a double bed in the main area, there were two rollaway cots with real mattresses lined up on opposite sides of the room for the twins. There was a desk, a couch, a mini fridge, great views of the airport, a TV on a swivel arm to watch on either side of the room, and a dance floor. We felt lavish and pampered and after dinner at the airport at Pepe’s Pizza we fell fast asleep and didn’t rush back to the airport the next morning. It was a welcome reprieve.

We slept in so late though, we thought we missed breakfast. We lazily looked at the clock when we finally awoke from our slumber and hurried to call reception to find out if we could still make it. Luckily we weren’t too late, but only had about 20 minutes to both get down to the restaurant and eat. We found an abundant feast waiting for us, and indulged our hungry appetites.

► For Kids: We justified the cost of the hotel once we factored in the amount of time and money it would take to travel to downtown Oslo. At $20 per ticket for the train each way (kids are free), plus lugging around the broken luggage, we accepted the convenience. It was worth it. The kids loved the space to play, jump and even yell in our corner of the hotel. The long winding walkways gave them plenty of chances to race each other down the hall and chase out their wiggles.

We are notoriously cheap, and have a set $99 limit for hotel stays. In Europe, hotels are ultra strict for occupancy limits and this hinders our ability to stay together cheap in one room. The Radisson Blu obviously exceeded our maximum but in the end it was the best choice. Rather than running our family more ragged in the pursuit of a cheaper hotel we paid for the convenience and space and thoroughly enjoyed our time spent relaxing and sleeping.

► Nap-Time Version: Our last minute stay at the expensive Radisson Blu in Norway.

We also stayed at the second most popular Norwegian hotel, the Scandic, and while in Kirkenes we joined a Northern Lights tour!