Home Are We There Yet? Airlines That One Time When I Got to Fly in the Cockpit |... 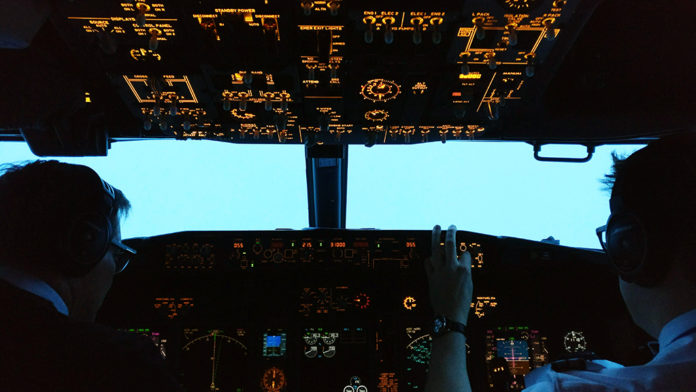 Scandinavian Airlines, SAS Airlines, flies throughout Denmark, Sweden and Norway to 1300 destinations all across Europe. Their slogan, “We Are Travelers” is fitting as Scandinavians travel an average of five times a year throughout the three countries listed above! It was also fitting for our particular family as we are not only travelers, but have Scandinavian ancestry. Everything comes full circle, doesn’t it? But more important than any of these facts is my declaration that SAS is, and will always be, hands down my absolute favorite airline across the world, forever and ever, throughout the end of time.

Why do I heap such profound praises upon this airline? I’m building up to that…

We flew SAS for all our adventures throughout Norway with varying degrees of success. We understood going into this adventure how difficult traveling would be so close to Christmas, but didn’t realize things also shut down for New Years as well! We found ourselves attempting the last flight before New Years Eve, just like we did on Christmas Eve, this time out of Kirkenes to Oslo before the airports ceased operations.

Minutes before departure they informed our family that they had just four seats available. Four seats, when we needed five! We just needed one more seat and we could get out of Kirkenes, the land of no food, and finally fill our bellies with something to eat. In Europe, airline crewmembers of any airline can sit in the empty Inflight jumpseat if the crew offers it, but isn’t something you can request.

We were about to start searching for a new hotel in Kirkenes for the New Year, when the airport crewmember took pity on us and asked me if I’d be willing to sit in the jumpseat. The jumpseat isn’t comfortable and you rarely are able to sit as you have to constantly move for the crew to be able to do their jobs, but as long as I get to be on the plane, I don’t care where I sit. I’d sit in the bathroom if they’d let me – this of course is strictly not allowed regardless of the country or airline.

The airport crewmember got on the radio to ask the inflight crew if this would be ok. After what felt like an eternity, we were cleared to board! Gabriel and I got the children situated in the cabin and then I went up front to the galley to wait for the doors to be closed and armed before taking my jumpseat for departure. After speaking with the pilot, the inflight attendant came out of the cockpit and turned to me unexpectedly.

“Would you like to fly in the cockpit jumpseat instead?” she casually asked me.

Would I? Would I? I tried very hard to behave like an adult and a normal human being who was not about to crawl out of my skin with elated excitement at the possibility of something I never thought was a remote possibility in my short life on this planet. I gulped own the rising palpitations coming from my stomach and walked into the cockpit like I belonged in there.

Captain Christian, and copilot Joe, were awesome. They explained all the safety procedures of our Boeing 737 in case of an emergency and we all saddled up. I asked if I could take photos (super amateur cell phone photos where I didn’t get in the way) and they obliged. After that, I donned my headset and listened for the go ahead from Air Traffic Control.

This is a horrible video of our departure. I thought I had the camera angled better, but it’s just several minutes of the pilots flipping switches.

Once we were cleared and found our cruising altitude, Christian and Joe were chatterboxes. They explained everything to me from the consoles, knobs and switches to how my voice was currently being recorded on the black box! We saw an Emirates plane fly directly over us, and they shared stories of how those huge body aircraft maneuver in the air. Christian and Joe were happy to answer my many, many, many questions and talked about the differences between flying commercial aircraft in the states versus Europe, and flying ambulance aircraft or private aircraft which both pilots had previous experience in.

The magic beyond the panoramic windows in the cockpit are tantalizing. The all encompassing and unencumbered view of passing through 35,000 feet of Earth’s atmosphere creates a hypnotic attraction. The view is other wordly. It’s not a normal view of the Earth, or one that most people ever see and it’s vastly different than the side view you get from the obstructed oval window by your seat.

This video is the beginning of our descent. You can see the plane as it separates the clouds, and the changing atmospheres. It has a much better angle, and very cool views.


The clouds appear like scoops of soft gelato that the plane easily slices through to reveal a blanket of mountainous valleys in the sky. The sun peeks over the horizon as the plane chases it into the heavens. It’s an entirely new environment and cityscape. For me, it felt like venturing beyond the known world.

This final video is of our descent. You can see the runway suddenly appear into view with the lighted strips as the pilots expertly maneuver through the fog. Initially, they were going to use autopilot for landing, but when visibility cleared up they took the opportunity to manually land the plane.

► For Kids: SAS Airlines is great. They are a standard fare airline with no bells and whistles, but they are kind and offer complimentary snacks and drinks – but some things are just for parents, like flying in the cockpit!

Have you ever had the chance to fly in the cockpit? Is it something you’d like to do, or do you prefer someone else to worry about the technical part and you don’t want to think about it?

► Nap-Time Version: That one time when I got to ride in the cockpit!

For more of our adventures in Norway, check out our cruise through the Arctic Ocean on the Hurtigruten, Christmas in Oslo and successfully hunting down the Northern Lights in Kirkenes, Norway!