Home Where Are We Going? Europe Best Way to Celebrate a Scandinavian Christmas 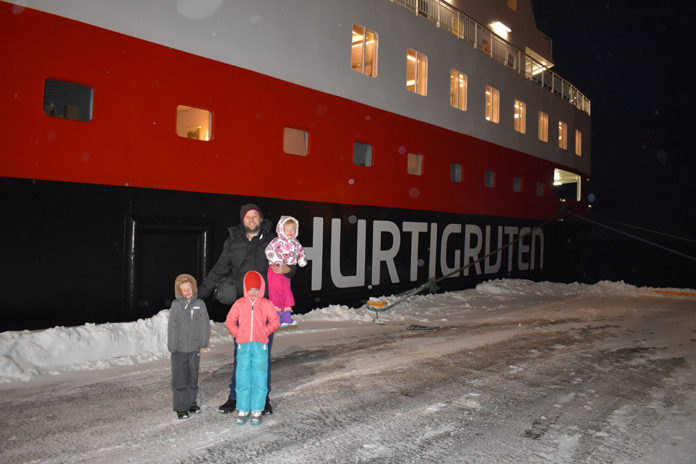 We traveled to Norway with one purpose in mind, and that was to see the Northern Lights.

When we first started planning, the first result that popped up in Google was for the Hurtigruten Northern Lights Cruise.

The advertisements for the Hurtigruten were compelling, enticing, and romantic.

We were desperate to see the lights, and we were sold. We’d already failed at seeing the Northern Lights once in Iceland, and we weren’t going to take the risk of missing them again.

Although we took this cruise for the sole purpose of seeing the lights, the authentic experience of sailing on the Hurtigruten in itself tops the list of our favorite experiences – with or without the lights.

This is our Hurtigruten Review.

This is our Hurtigruten Review.

We didn’t actually experience the Northern Lights on the cruise itself. At least, we weren’t sure if we did or we didn’t which doesn’t exactly make for a very good memory or story.

In actuality we did see them, but we didn’t realize it.

Our first night on the cruise during dinner service, the captain of the Hurtigruten announced over the intercom that the Northern Lights were visible off the starboard. We immediately went berserk and ran outside.

Standing on the deck of the ship without our coats on, we scrutinized the slate colored sky, spending the next few minutes trying to decide if we were pretending clouds were the Northern Lights or if we were just looking at clouds.

Gabriel decided they were just clouds and we headed back in to eat.

That same night we took turns waking up every hour during the night until 4am to run outside to see if the lights were dancing in the sky.

Again, it turns out they were, but each time we couldn’t convince ourselves how to decipher between the clouds and the sky in the abysmal darkness.

We realized, days later, there should have been no mistaking the waving of the lights, despite the colors, as they danced in vertical lines against the backdrop of the black sky.

You definitely can see an epic Northern Lights show on the cruise.

In fact, we found out from another family that just the night before we boarded, as they sailed through the Raftsundet Sound Channel in between the three thousand foot tall majestic fjords of Trolltindan and Blåfjellet a dazzling display wooed the passengers.

How to Chase the Northern Lights

If there is one thing we can say about chasing the Northern Lights, (aside from bringing your tripod) is plan more than one excursion to seek them out.

As was the case in our experience, you very well may not know what you are seeing, and even if you do know it, they will fluctuate and change offering a different experience each time.

At the very least, setting out multiple times to witness this phenomenon will provide you with the understanding of what exactly you are looking for and begin to learn to recognize what you are witnessing. 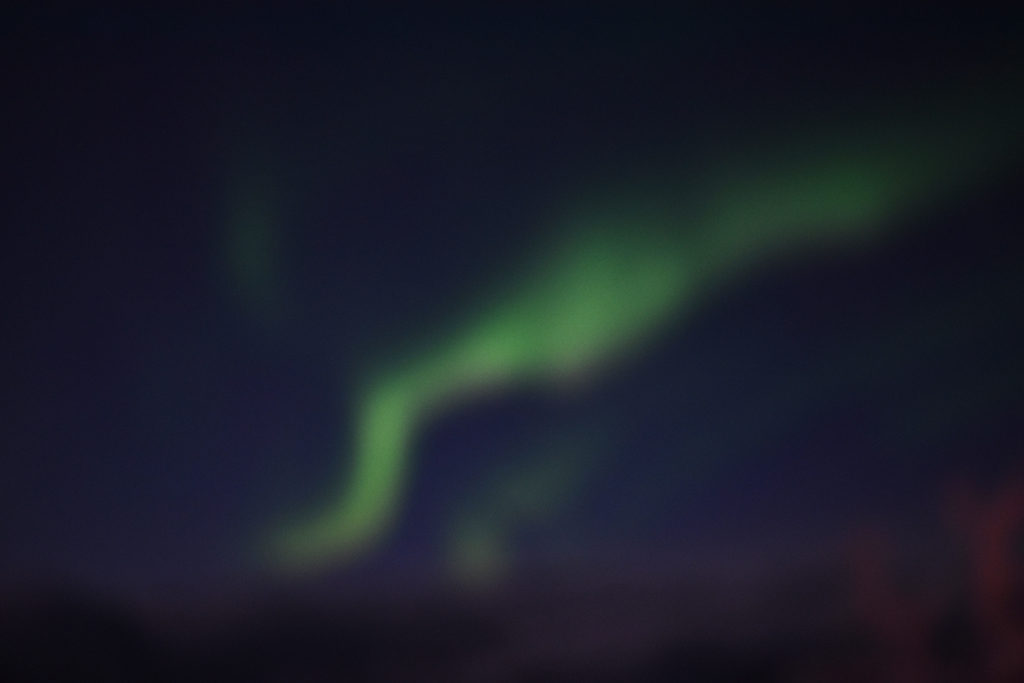 So what makes the lights so impressive, if you can’t even tell what you are seeing?

Although at first we mistook them for clouds, due entirely to impatient discernment, they don’t always appear milky.

When you stop doubting and interjecting your own cynicism about how disappointed you are at seeing nothing, you can focus on spectating one of the world’s most splendid anomalies as the very hand of God reaches down to paint a picture before your eyes.

While it has many of the unique features of a grandiose cruise ship it offers a singular authenticity and charm that is unmatched.

In our eyes, it is a Norwegian showboat.

The Hurtigruten offers an experience that is personal and charming, and evokes a distinct and specific fondness for the simplicity of appreciating simple pleasures.

There is no grand check-in procedure, no safety briefing, and no security. When you board, you carry your suitcases and belongings up a steep flight of stairs and wait in what resembles a hotel lobby.

Someone will greet you at the front desk and present you with your room keys.

The first floor of the ship is both the crew and the car deck. It smelled strongly of ammonia and isn’t accessible for guests beyond the elevator entrance.

Decks 2, 3, 5 and 6 comprise the passenger rooms, with hospital and sauna on deck two and check in and laundry on deck three. The outdoor walking deck is found on five, and two outdoor jacuzzis can be found on the stern on deck six.

Both restaurants are on deck four along with the lecture hall.

The panoramic Explorer’s Lounge, Multe Bakery and Cafe with children’s toys, fitness center and outdoor sun deck can be found on deck seven.

We were split into two rooms, on deck five and six, each with three twin beds: two floating beds and one converted couch. There was barely enough room in between the beds to walk through.

We didn’t use the shower in the room, but it wasn’t big enough for our three year old let alone a full bodied human.

Despite their size, the rooms were surprisingly comfortable, and we really enjoyed the uniqueness. We were on opposite sides of the ship, but both on the stern. A short jaunt up or down the stairs and we could find each other quickly.

Other rooms are available including rooms with queen size beds, or suites, but we loved our tiny rooms. We didn’t spend much time in them, so there wasn’t much need for more space.

Besides, give us unique experiences with good food, good people, and at a good value, and we are happy to please.

What is Special about the Hurtigruten?

Intrinsically, the Hurtigruten is not a luxury ship. It is not about lounging on the ship, eating yourself into gluttonous oblivion and being entertained at every turn.

The Hurtigruten is about exploring the individual regions of Norway, getting to know and love the country, appreciating the diversity of the respective provinces and examining the landscapes.

In fact, on the Hurtigruten, excursions are replaced by expeditions.

These are a few of the wonders that can be experienced on the Hurtigruten.

In North Cape, the most northern landmass in Europe, guests debarked off the ship and took a snowmobiling expedition across the region where we picked them up in the next port.

In Kirkenes, the bravest ventured into the cold and went on an ice crabbing safari on the frozen lakes of Eastern Finnmark.

Prior to our boarding the ship, we joined in on a husky sledding adventure in Tromsø where we rode with the lead musher through the snow blanketed fields of the countryside.

As the Hurtigruten sails through the Norwegian fjords, cutting through the chilly waters of the Arctic Ocean it makes a stop in each port to pick up the best local, and fresh foods in the region to serve for dinner the same evening.

From buttery, succulent Arctic Char from Sigerfjord and monstrous King Crab in North Cape, we ate the most incredible food of our entire lives during our short two night cruise on the Hurtigruten.

Each dinner is served with an accompanying pamphlet that describes how each item on the menu was caught, purchased, or prepared.

The first night on the cruise we departed Tromsø and were served a Creamy Hen Soup served in two portions. First came the chicken and vegetables, followed up with the creamy broth.

Our dinner plates were piled high with the most luscious fish I’ve ever consumed. It reminded us of fresh Pacific Salmon caught in Newport we would purchase during our weekend getaways when we lived in Oregon.

Our Arctic Char was covered with thin slices of carrots and onions, over a bed of fresh kale and a mayonnaise relish with a side of potatoes.

Of course no European meal would be complete without a spread of cheeses and grapes plus a variety of breads.

I am now officially obsessed with cauliflower soup and chocolate panna cotta.

► For Kids: The Hurtigruten is the ultimate way to experience Norway. Though you won’t find many kids running through the halls on the MS Kong Harald, this is the best way to experience everything Norway has to offer for all ages.

The Hurtigruten is absolutely family friendly and engaging at every turn.

The lectures offer world schooling lessons on historical and cultural stories about Norway, the food served is a tandem experience combining geography and husbandry, and the expeditions offer unforgettable memories to thrill the whole family.

We truly regretted only staying on the ship for two nights. The full cruise departs from Bergen and travels north for 11 days across the entire western Norwegian coast.

If you are going to take a cruise on the Hurtigruten, plan for the entire trip!

► What We Learned: We learned of the multicultural Christmas celebrations and feasts revered in Norway, incredible Northern Lights sightings, the regional, and local cuisine and the consumption of delectable food, and so much more about the Norwegian way of life.

We are saving up to take a cruise through Antarctica on the Hurtigruten next!

► Nap-Time Version: Our Family Hurtigruten Review: The preeminent way to experience the country of Norway as a family.

Be sure to check out our other adventures in Norway: Celebrating Christmas in Oslo, Flying in the Cockpit on SAS Airlines, and struggling to find a decent place to stay.