Home Play Time Culture Braving the Elements: Driving in Iceland During the Winter with Toddlers and... 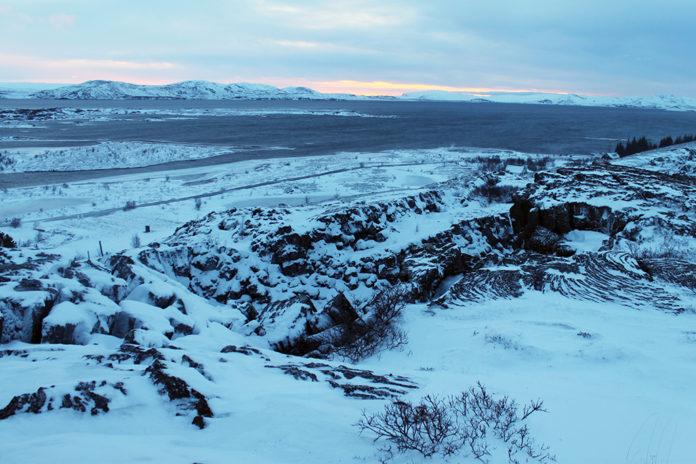 Driving in Iceland in the winter can, and most likely will be terrifying and treacherous. Many of the roads are actually closed during the winter because driving conditions are so poor, including the entire northeast region. Driving in Iceland isn’t too bad in the city, but once you leave Reykjavik, country roads aren’t a priority for snowplows. In addition to the snow on the roads, you’ll experience whiteouts, ice and 0% visibility in 20 hours of total blackness.

Icelanders drive on the right side of the road, with the driver on the left side of the vehicle, and that familiarity definitely helps when you can’t even see the road. Think that’s overstating things? It’s definitely not. For most of our activities we had to leave early in the morning, before sunrise. Since we only had about 4 hours of true daylight, we couldn’t waste time driving after the sun came up if we wanted to see or accomplish anything.

One morning we think we might have glimpsed the northern lights. There was definitely a green hue in the sky, but it was so cloudy it was impossible to say for sure. It may have been part imagination, part wishful thinking, but it certainly wasn’t the light show that we set out to see.

The day we set out for our Golden Circle adventure, we got caught in a blizzard, twice. The first time was in the morning before the sun came out, and we had just left the city limits of Reykjavik. We were driving on a quiet two lane highway when the snow started falling. Before long, there was nothing but a white sheet of snow pummeling us from every direction and we weren’t even sure where the road was. Our vision was utterly gone, visibility was at 0%. Our view was so obscured we considered heading back, until we saw car after car speed past us into what may have been oncoming traffic for as little as you could see, while we crept along trying not to get hit by these supposed experienced drivers who either knew how to drive blind, or had xray vision. The most we could see, of the road or the landscape, were the red lights from the vehicles in front of us. We attempted to follow the lights of their vehicles, but they were driving so fast we didn’t feel safe or comfortable keeping up the pace. Once their lights disappeared we attempted to follow the tracks they made on the road, but it didn’t take long before they were completely covered.

We contemplated what to do and finally decided to pull over and wait it out. Fortunately for us, that didn’t take long and we were back on our way.

When the snow wasn’t blinding us, we saw vast stretches of the Icelandic landscape. We called it the great white tundra. There was nothing to see for miles in every direction but white. Everything was white. Well, there was a little bit of blue, reflecting from the imperfections in the snow blanket and mirroring the hue of the sky as the sun slowly peeked over the horizon.

One night we drove into the mountains a good ways, until we couldn’t see any part of the city, to try and get a good vantage point to wait out the Northern Lights. We were far enough from the city, it was eerily pitch black. There were no cars, no lights, and nothing was in our way. We waited hours, until the wee morning hours, for the lights to appear. Finally, defeated, we turned back. The sky was clear as we headed back down the mountain with a sheer cliff on our right and only a tiny guide rail between us and certain death. In a split second, we were caught in another whiteout. We had used up the majority of our gas running the heat in the car to stay warm, and we were terrified we wouldn’t be able to make it back to our hotel. The sheets of ice that covered or impaired our vision were like ghosts taunting us to come to the other side of the veil with them.

After that frightening experience we stuck around town while hunting for the Northern Lights. We still had to leave the bright lights of the city, but when we were driving in Iceland we headed away from the mountains and we took lots of warm blankets with us. There are many plowed roads around town, spanning the distance between Reyjavik and the Keflavík International Airport.

Between defying death twice driving in Iceland, and braving the cold with two tiny toddlers, we were never rewarded for our efforts. Just hire a guide to see the Northern Lights. If we learned anything, it’s that nothing is just that easy, and most tour guides offer a money back guarantee.

Other than failing miserably at seeing the Northern Lights, we loved our adventures in Iceland. We went ice skating outside in Reykjavik, braved gale force winds at Hallgrimskirkja, and used exactly zero Icelandic phrases during our visit!