Home Where Are We Going? Europe Exploring the Golden Circle with Kids in the Middle of Winter in... 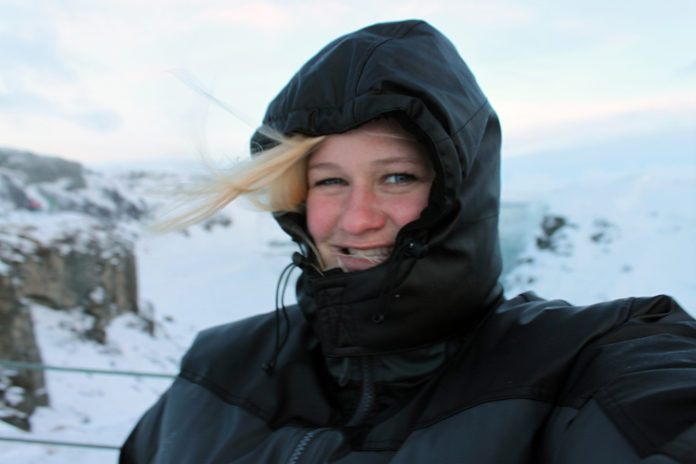 When we traveled to Iceland, during the middle of December and the dark of winter, we had to pick our activities deliberately. With approximately four hours of daylight we couldn’t see everything, it just wasn’t mathematically or cosmically possible. The Golden Circle is 300 kilometers of Iceland’s most popular sites and attractions, including incredible sites that you can’t find anywhere else on the planet! The problem: three hours open road ÷ four hours daylight × nine stops = not enough time.

Driving conditions are poor during winter in Iceland, and that is an understatement. Read more about driving in Iceland, but the short and sweet is that snow made visibility non-existent, and between the snow the ice and the darkness, it was impossible to see the road.

Our first stop on the Golden Circle was Thingvellier National Park, Þingvellir. The point where the North American tectonic plates converge with the Eurasian tectonic plates. You can stand on both North America and Europe at the same time, technically! The 70 meters/229 feet, of space in between is no man’s land that stretches 7 kilometers/4 ½ miles. The two plates are drifting apart with an unmistakable, and unavoidable crack in the ground where this occurs. During the summer, you can scuba dive in no man’s land, and during the winter, you can walk along it and marvel at the incredible wonders of nature.

This place isn’t just where the tectonic plates converge, it holds historical and cultural significance for Iceland as well. Þingvellir is translated to Parliament Plains. From the year 930 all the way until 1798 Parliament, or the Alþing General Assembly, held meetings at this location. It is a national shrine and holds great significance for Iceland’s cultural heritage.

Walking the grounds here is magnificent. You can see into the horizon for miles, as long as it’s clear, and the snow isn’t falling. You are surrounded by great rock walls covered in snow that is so deep on the ground it comes up to your knees. There is a bridge that spans over the crack where the tectonic plates have created fissures in the ground. I can’t even imagine how this place looks when all the snow and ice is melted, and I can’t wait to find out.

After leaving Þingvellir, we headed to Strokkur. It is little brother to the geysir that named all the other geysers in the world that were discovered after it. Geysir is dried up and no longer erupting, but little brother Strokkur erupts every 6-10 minutes in a powerful explosion 15-20 meters/60 feet, in the air. It has even been known to reach double that height.

We visited Yellowstone a few years before our trip to Iceland and were pretty impressed with Old Faithful. When we visited Strokkur, comparing it to Old Faithful, we weren’t as impressed, especially considering Strokkur is nicknamed Little Faithful. We felt like it wasn’t a fair comparison. This summer we went back to Yellowstone, and after watching Old Faithful erupt a second time thought it wasn’t nearly as cool as Strokkur. In reality, Old Faithful only reaches a height that is 20 feet taller than Strokkur – so basically they are both pretty impressive.

Parking is located at the visitor’s center which also houses a restaurant and a gift shop. You can get hamburgers and hot chocolate here, magnets for your fridge and try on the viking hats of your ancestors. We managed to get the twins out of the car at this stop with the promise of hot chocolate to warm their tiny bodies.

From here you take a short path to walk out to the geysir. It erupts so frequently there is no need to time your visit. You can get close enough to the crater that you might even get sprayed with the hot water. For just about a minute, in the freezing cold of Iceland’s frozen tundra, you are finally warm from the escape of steam and hot water that fills the air.

All of the attractions along the Golden Circle are remarkable. They are, after all, Iceland’s most famous and noteworthy attractions. Of these, Gullfoss Waterfall may be the most magnificent. It is the result of glacier bursts that filled the landscape creating a massive river and overflowing of water from Iceland´s second biggest glacier, the Langjökull.

The falls are composed of an upper and a lower falls. The upper falls are flanked on both sides by large rock walls. In the winter they begin to freeze over and collect ice and snow, which multiply by cascading icicles. The resulting flowing lakebed in the middle forms the Hvítá, White River, which empties into the lower falls which then drops a distance of 32 meters/104 feet, into the ravine below. This river travels into the canyon with walls rising up 70 meters. Do you notice a pattern? 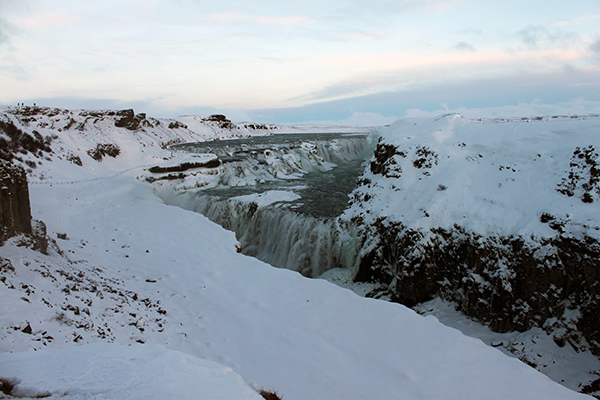 There are several viewpoints to witness and admire Gullfoss. The closest one to the parking lot is a short walk, with a wooden platform that is perched over the canyon. It gives an excellent view of both the upper and lower falls. There is also a viewpoint on land that stands directly over the upper falls to the west of the platform. It is a significant hike, and since our babies didn’t want to leave the car again, we missed out. Honestly, it was too cold for us too.

This was our last stop on the tour, and we could barely make it out in the darkness. We had to position our car just so with the headlights shining directly where we wanted to see. Kerið Crater is a sunken, ancient volcanic crater, approximately 3,000 years old. The caldera is approximately 55 meters/180 feet deep, 170 meters/560 feet wide, and 270 meters/890 feet across. It was magnificent.

► For Kids: Well equipped with proper snow clothes, this is an exciting adventure! Truthfully, our kids missed everything except Strokkur because we did not come well equipped with proper clothes. Though we loved visiting in the winter, we imagine it is just as remarkable other times of the year. Kids can physically stand on two continents, they can see firsthand nature and geology at work, and they can place historical events with their surroundings.

Have you toured the Golden Circle in Iceland? What time of year did you visit? Be sure to check out Via Travelers awesome 2 day itinerary to make the most of your time in Reykjavik!

► Nap-Time Version: Our short tour of the Golden Circle in Iceland during the middle of winter.

Driving in Iceland in winter is a little scary, to be honest, and definitely something you’ll want to check out if you plan on driving the Golden Circle and celebrating Christmas in Iceland like we did!