Home Where Are We Going? Asia The Truth About Wolmi Family Theme Park: Ultimate Insider Guide 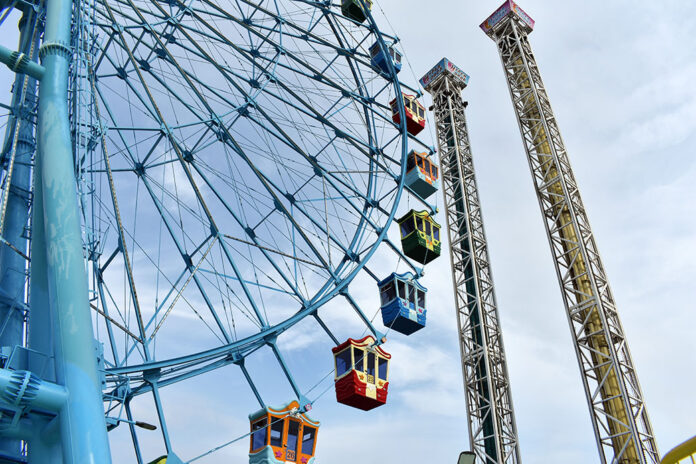 If you want to throw away $30 we could recommend far better ways to do it. Wolmi Theme Park is like a miniature, run down, vacant Coney Island with no beach access, and then imagine something even worse.

Wolmido Island is highly touted on everyone’s “Top 10 Things you Can’t Miss in Incheon, South Korea” but for our family we wouldn’t even put it the Top 50. This is the truth about Wolmi Family Theme Park: Ultimate Insider Guide.

What is Wolmi Theme Park?

Wolmi Theme Park is a pint sized permanent version of a county fair minus the carnival food, face painting, and livestock. Come to think of it, it’s a fair minus anything resembling fun at all. The idea is there, it’s just the execution is way off.

There are 24 rides in total, although it’s definitely a stretch to call some of these rides “rides”. More than half of the rides are baby rides; not kiddy rides, baby rides. The remaining 9 rides are for children over the Korean magical height requirement of 130cm.
Half of the 24 rides are closed or broken. Literally, 12 of the 24 rides at the park were closed. In fact, this park is notorious for not completing safety checks and are considered ride at your own risk.

Most recently, in both 2015 and in 2017, multiple guests were injured on rides during a malfunction. This is probably the reason for the phenomenally high ticket rates – you are covering the cost of the insurance premiums.

On the plus side, there are no lines. This place is so deserted there are only two ride operators that operate all 24 rides. Instead of queues, you simply stand in front of the ride, and eventually the ride operator will spot you and operate it for you.

It might get busy in the evenings or weekends, but we doubt it based on the layout. There isn’t even anywhere to queue up for rides.

This place could be a treasure trove.This little carnival has the perfect location and is in close proximity to several other main ‘must do things in Incheon’. Everyone coming to visit could be at risk of having a downright love affair with this family attraction, but instead, families are left vowing divorce rather than undying affection.

How to Get to Wolmi Theme Park and Where is it?

Wolmi Theme Park is located on Wolmido Island in Incheon, South Korea. The name derives from the half moon shape of the island, and although the island is now part of the mainland it retains the name nonetheless. In addition to the theme park, there is a foot spa, splash pad, pier, restaurants, monorail, and coastal walk.

The easiest way to get there is by way of a five minute bus ride from Chinatown, or Songwol-Dong FairyTale Village. It’s also in close proximity to Sinpo International Market and the Arts Platform.

Technically, there is no entrance fee. It’s free to come partake in the ambiance of Wolmi Theme Park with absolutely no cash to your name. There are no turnstiles or ticket checkers at the grand front entrance. You can check it out first, scope out the rides you want to try, and most importantly see if they are even operating on the day you come.
If you want to actually ride said rides, however, you’re going to pay a pretty steep cost.

Even without an entrance fee, it’s so expensive you could literally go the World’s Largest Indoor Theme Park Lotte World in Seoul for less money.

All of these attractions are located in Seoul, just 45km from Wolmi Theme Park.

What Activities Can You Find at Wolmi Theme Park?

This place is small. We are talking less than a city block small. The park is actually built on three platforms. The majority of the rides are located on the ground floor including bumper cars, baby swings, a weirdly creepy bunny ride, plus a free fall drop tower ride and an octopus having a seizure ride.


The second floor has a kids indoor play place, and a dragon boat ride. The third floor has a small roller coaster and a ferris wheel.

Because we’d promised our kids a carnival, we purchased them each a 4 ticket pack. In the end they got 6 rides each, we suspect, because the ride operators were bored.

Pie and Daddy also rode the Hyper Shot Drop because we forced Pie to ride the Funny Bunny Ride with her little sister.

Bumper Cars were standard fare, as well as the Swing Ride, Animal Rotation (teacups) and the Mini Flume.

Animal Rotation wasn’t half bad, but they weren’t allowed to spin the teacups. The ride operator told them it was too dangerous.

They also weren’t allowed to “bump” their bumper cars. Also, because it was too dangerous.

Funny Bunny is similar to a miniature Ferris Wheel rotating in a circle painfully slow along a wall. Widmore had used all four of his tickets, but Eclair and Pie each had one ticket left. Eclair had her heart set on going, but Pie wanted to choose just about anything else. The operator said he’d let all three on, and so the choice was made.

She was a good sport, but Gabriel took her on the Hyper Shot Drop because the bunny ride was agonizingly unpleasant. The 70m/229ft drop successfully made her stomach pivot up to her chin and they both came out smiling.

Super Jump is what we are calling an octopus having a seizure ride. Each compartment is on the end of a long arm that super jumps up and down while convulsing. The twins loved it!

Who Would Want to Come to Wolmi Theme Park?

In each show, the characters are having a fun time riding rides whilst finding romance, so it naturally follows that so you will too.

How Much Time do You Need to Play?

If you were to buy the ₩30,000 unlimited pass, you could ride all the rides within 1 hour and then you could ride all your favorites again if you felt like it. You’d also get two hours at Chappy Family Park. It’s safe to say four hours would be more than enough time to truly relish in all that Wolmi Theme Park has to offer.

There are also other activities, outside the carnival, on Wolmido Island that could fill up a full day of activities for the entire family.

Family Hint: While the theme park itself has restrooms, just outside the main gates you’ll find much better maintained and clean restrooms, plus infant diaper changing tables.

What Else is There to Do on Wolmido Island?

As with most attractions in South Korea, Wolmido Island offers a Culture Street. The Culture Street at the island offers several standard Korean amenities mentioned above, such as a complementary foot spa, and a Waterplayground Children’s Splash Pad with multiple water features.

The pier is quite beautiful extending well into the Yellow Sea and offering incredible views of the surrounding areas and the ocean. It’s our favorite part of Culture Street at Wolmido Island.

Further down Culture Street are highlights such as Doodle Pillar, Meeting Square, Arts Square, Performance Square, and Good Harvest Square. These locations are gathering places for street performers, artists and musicians. You can play carnival games, shoot darts and rent bicycles for perusing the neighborhood.

During select nights, you can even view fireworks along the boardwalk. 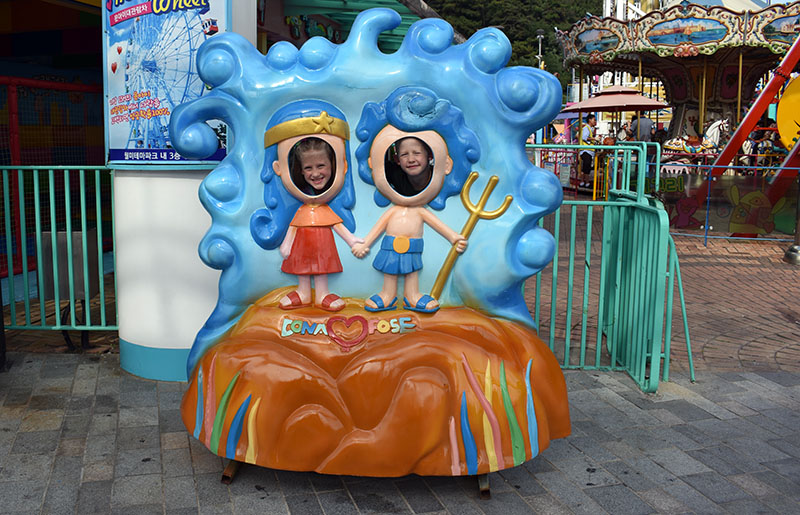 There is also Wolmi Park. This large ecological park is a gorgeous space offering views of Incheon Port and the Incheon Airport (ICN) from the glass observatory on top of the mountain. It is free for patrons.

A ferry cruise docks from Culture Street and takes an 80 minute tour around the island for between ₩7,000 and ₩13,000. Alternatively, you can take a dinner cruise on Saturday nights between ₩32,000 and ₩48,000. There is also a monorail that has been under construction since 2007 that has yet to be opened to the public.

During our visit it was far too hot for any of these activities, so we can’t speak to the authenticity but the pier, boardwalk and children’s splash pad are a fun relief and in close proximity to Wolmi Theme Park.

When it comes to food at Wolmi Theme Park there is a notable void when it comes to fried foods onsite. No churros, no french fries, no peanut butter squid! In fact, there isn’t even anyone selling ice cream or cotton candy!

There is a Lotteria, which is the Korean version of McDonalds. But, that’s all.

If you step outside the theme park, you’ll find two other restaurants nearby: Arabesque that offers Asian fare and Yejeon that offers western food.

If you are willing to travel even further down Culture Street you’ll find dozens of fresh, even raw, fish restaurant options. Not the least of which includes the notorious Sannakji 산낙지, or live raw octopus.

► For Kids: If you are willing to pay the steep admission to Wolmi Theme Park the majority of the rides here are geared towards small children. Depending on their thrill level though, it still may even be too mild for their liking.

► What We Learned: You can put a price on happiness. This place is a great opportunity to teach kids about budgeting and the value of goods.

Do you prefer smaller carnival theme parks, or do you opt for the standard Disney experience? Let us know in the comments!

► Nap-Time Version: Wolmi Theme Park has the potential to be one of the best attractions for families in the Seoul area. Instead it’s overpriced and under delivers.

Check out nearby Chinatown, or head to our family’s favorite theme park in Seoul, Lotte World!