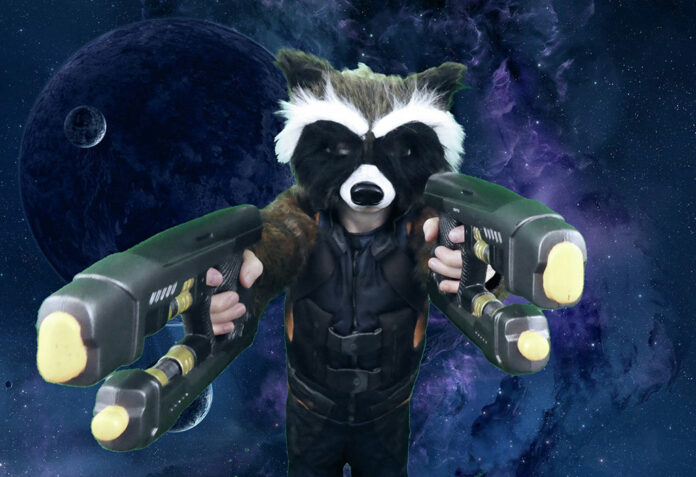 Without question, Halloween is our favorite holiday out of the year! It’s our favorite because there is no limit to the imagination and the fun that you can procure when playing dress-up and partying all season long! Many parents will probably want a costume that is lighweight and cute for their little one. Of course, many more will want to modify said costumes to make them extra unique. If you’re a parent who wants to go that extra mile and make something your kid loves then you have come to the right place!


When you put turds and boys together, it’s an immediate connection. He is team rocket Halloween costume all the way.

Dad will be Ravager: Peter Quill, better known as Star-Lord

Yeah… we know our stuff. #SuperFans (Emojis by Aleksandar Savic)

Before we get started, let’s just enjoy another famous turd scene from Guardians of the Galaxy.


Alright, now we can get started on this Rocket Raccoon Halloween Costume!

Little Widmore will be dressing up Rocket Raccoon: The genetically altered, bio-engineered experiment, stealing and self loathing Superhero Rocket Raccoon!

He’s got a lot of distinctive titles.

There are multiple suit options for an awesome Rocket Halloween Costume. It all comes down to how much fur you want.

We purchased our little guy’s Rocket Raccoon Halloween Costume off of Amazon.

The suit itself is a great match. It comes in small, medium and large. Our little guy was 6 when he dressed up as Rocket, and the size small fit until he was 8!

You can also pick this up at the Spirit of Halloween with fur legs. The one we ordered had one of the foot pieces sewed on backwards so we actually went to Spirit to get the replacement because we couldn’t wait for Amazon to replace it.

The Rocket Raccoon suit comes with a face mask, so if you want to call it good and skip to the section on Rocket’s Space Blaster Guns go ahead. But…, you should know that the mask the costume comes with is ugly scary. It’s scarier than the scary Godmother.

If you want a real mask that is so good people will have trouble figuring out if you are none other than Rocket himself, keep reading.

This awesome video tutorial goes through the steps of making a real looking raccoon mask. Everything you need to know is in the first 54 seconds. (The video includes making a costume too, but we found it easier to buy the ready make costume instead.)

It is as easy as it looks in the video – but a few things to note.

As funny as poop is, the real reason my son wanted to dress up as Rocket Raccoon was because Rocket wields a huge gun.

At home, this was no big deal because he’s got plenty of nerf blasters to choose from. However, since we were celebrating at Mickey’s Not So Scary Halloween Party we needed to get something we could pack on the plane.

Really, any gun will work for a Rocket Raccoon Halloween Costume. We wanted something slightly more other worldly, as the Guardians of the Galaxy aren’t of this world.

We chose these guns because they are double barreled.

This is the same gun we bought for Gabe’s costume as Star-Lord Peter Quill.

We thought the fact that the gun was double barreled and didn’t even come close to resembling anything like a real gun it would pass for Walt Disney World celebrations.

It didn’t. They confiscated it before we even walked through the gates.

Look at him! He’s ready to steal some batteries and save the world doing it! 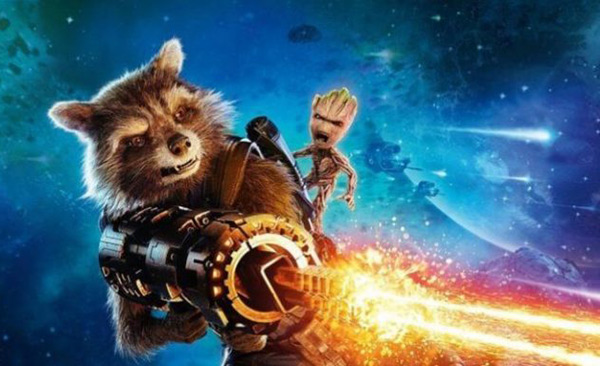 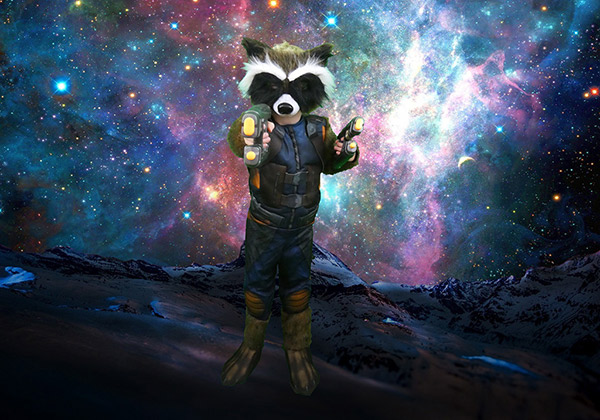 This is a great kids costume, especially for little boys. It’s higher quality than a lot of the nylon costumes mass produced these days and it’s held up throughout the years.

What is your favorite boys costume? We’d love to see it!

► What We Learned: Rocket Raccoon is lonely, and that’s why he’s so angry.

► Nap-Time Version: Everything you need to know to pull together a DIY Rocket Raccoon Child or Adult Halloween Costume Tutorial from Guardians of the Galaxy!