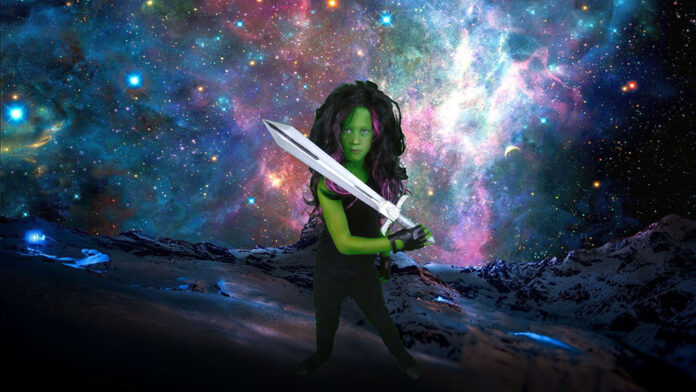 This year, The Guardians of the Galaxy are taking Halloween night off from their crazy antics. Guess who’s filling in?

Oh, that’s right! We might just be a crazier bunch of fools than the crusaders who think you can kill a monster if you let it eat you first!

In this post, we are going to show you how to transform from regular plain Jane earthling next door, into a sword slashing Guardian of the Galaxy with a Gamora Kids Costume for Halloween.

There aren’t a ton of girl characters to choose from in the Guardians of the Galaxy series. Gamora, Mantis and Nebula.

For our daughter, it came down to a few things:

Miss Pie loves how fiercesome Gamora is and thinks she’s so pretty with her pink and purple hair. Seriously, who wouldn’t want to emulate Gamora, the most dangerous woman in the universe!?

Gamora Kids Costume it is!

This year, Pie will be dressed up as Gamora Zen Whoberi Ben Titan. Yes, apparently that’s her real name.

This DIY Gamora Kids Costume is super easy to throw together!

As for the rest of us?

Gamora’s suit is pretty simple. It’s all black from head to toe, and you probably have everything you need already in your closet.

We picked out a pair of black jeans:
And a black racer back tank top:

The only thing we needed to complete the Gamora Kids Costume was a pair of fingerless black gloves:

The boys both got quad blasters so we had to find a sword for our daughter’s Gamora Kids Costume.

You can just watch these guys make it. ?

So, instead, we bought her a knights sword.

Then we spray painted the hilt silver, and Gabriel used black sharpie to darken the middle of the sword to give the illusion of a double point. We were going to cut it, but it’s hollow, so a black sharpie will have to do!

It’s as good as you’re going to get.

Any long black wig will be a match for a Gamora Kids Costume. Typically, the wig will be labeled a witches wig:

But Gamora’s hair isn’t just black – the ends are purple and pink.

We used purple and pink hair spray.
This stuff rubs out super easy, and smells really strong. If we did this costume again, a better alternative would be pink and/or purple clip in hair extensions:

There is no way standard body paint will cut it for full body coverage, and a full night of trick or treating. That stuff starts to itch after 3.2 seconds.

We need something that doesn’t itch, and you forget it is on.

This face paint is the best!

We purchased the standard colors that includes green for the face and arms, and white for Gamora’s embellishments. We only painted her face, neck and arms. Anything visible.

The containers may look small, but they go a long ways mixed with a scant amount of water. One small container of paint was enough for both Mickey’s Not So Scary Halloween Party, plus Halloween Night.

With her game face on she’s ready to save Drax from a crashing ship with nothing but her bare hands! 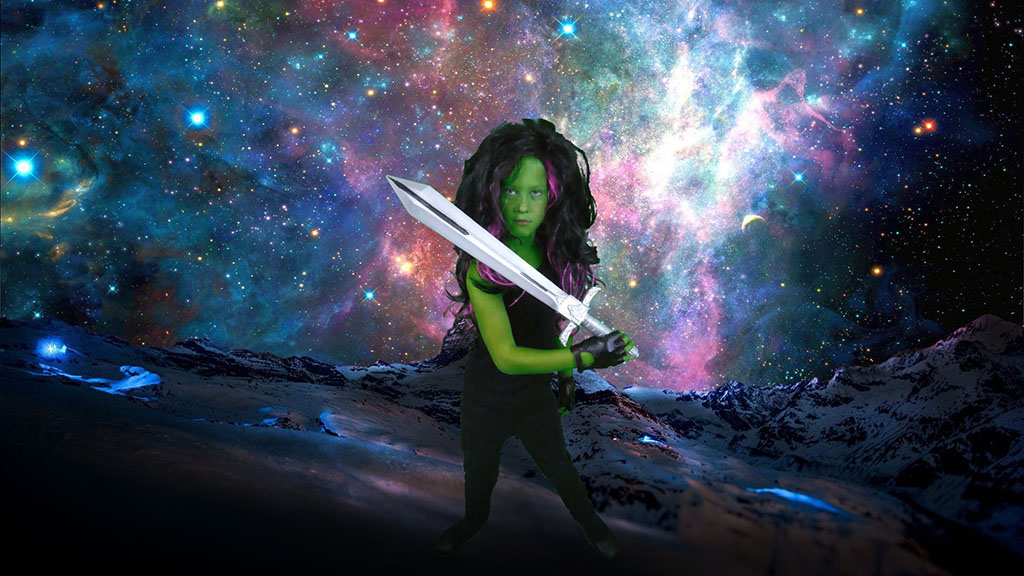 ► For Kids: This is the modern day version of cutting two eye holes in a pillowcase and sending your kid out as Ghost for Halloween. Parent of the Year award goes to this Gamora Kids Costume.

What is the easiest Halloween costume you’ve ever put together? Last year when we dressed up as Pirates it took more effort!

► What We Learned: You can be pretty and a warrior. You can embrace everything that makes you, you, un-apologetically. You can be vulnerable, and fierce.

Who is your favorite Guardians of the Galaxy character?

► Nap-Time Version: Everything you need to know to pull together a DIY Gamora Kids Costume for Halloween from Guardians of the Galaxy!