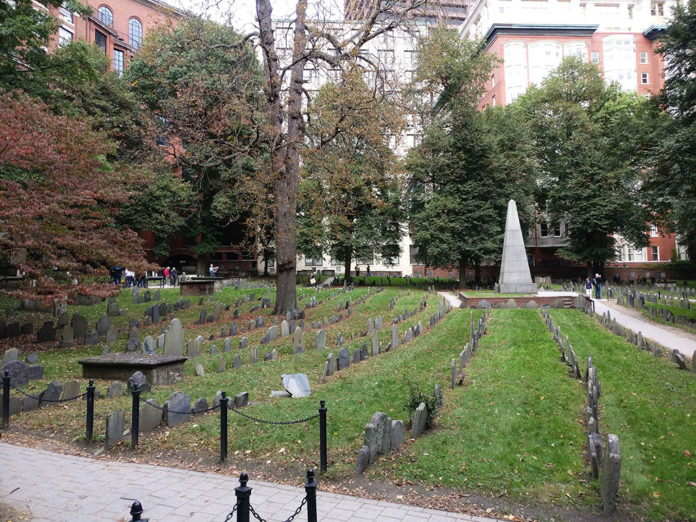 Across the street from the Granary Burying Ground is Beantown Pub. For some reason, a joke we heard about the pub runs through my head everytime I think about this site: “This is the only place you can get a cold Sam Adams while looking at the cold Sam Adams.” I don’t know that it’s particularly funny, but it’s definitely an interesting and provocative suggestion – but not nearly as provocative as John Hancock’s gravestone marker.

John Hancock’s gravestone marker is one of two large gravestone markers in the Granary Burying Ground Cemetery. The other large marker, shaped like a giant oblong pyramid, belongs to Benjamin Franklin’s parents and siblings (Ben is actually buried in Philadelphia).

John Hancock’s grave, on the other hand, might make you think his last name was Johnson. Seriously, there is no other way to look at this. No. Other. Way. There is no mistaking the intention of this grave. What’s more interesting is that it’s not the original marker. The original gravestone deteriorated to the point it disappeared entirely. That’s when the commonwealth of Massachusetts stepped in and erected this shaft with his handsome face (their words).

John Hancock served as governor of Massachusetts and was revered by his constituents – clearly. He not only funded the American Revolution, but of course, was the first to sign the Declaration of Independence. His is the largest marker in the gravesite, paying homage to the fact that Hancock himself (as the idiom suggests) had the largest signature in history. His name is also on the tallest building in New England in Copley Square, also named the Hancock Building.

Among the more than 5,000 people (though there are only 2,300 gravestones) that are buried in this gravesite include:

The name of the graveyard, Granary Burying Ground, is due to the fact that it was created on land that was once home to the same granary where the Park Street Church now stands. This grave-site is reminiscent of other early grave-sites established throughout this city and the city of Salem. The markers are ornamental with beautiful engravings and designs. One of the most interesting features to us, is how the city has risen up around these ancient sites in a way that apartments and homes have windows that look directly into this famous and compelling historical site. Imagine staring at that ? all day long.

► For Kids: Talk about the ultimate field trip! This site is full of fascinating stories, amazing history, and incredible records. This is the place for American Revolution biography. Kids will enjoy walking this site and learning about the place they call home!

Have you walked the Freedom Trail? Ordered a cold Sam Adams while looking at the cold Sam Adams? Starred up quizzically at John Hancock’s grave? Tell us all about your experience!

► Nap-Time Version: The who’s who of grave-sites in the Granary Burying Ground on the Freedom Trail.