Home Play Time Holidays Our Family Visit to the Site of Old Burying Point Cemetery and... 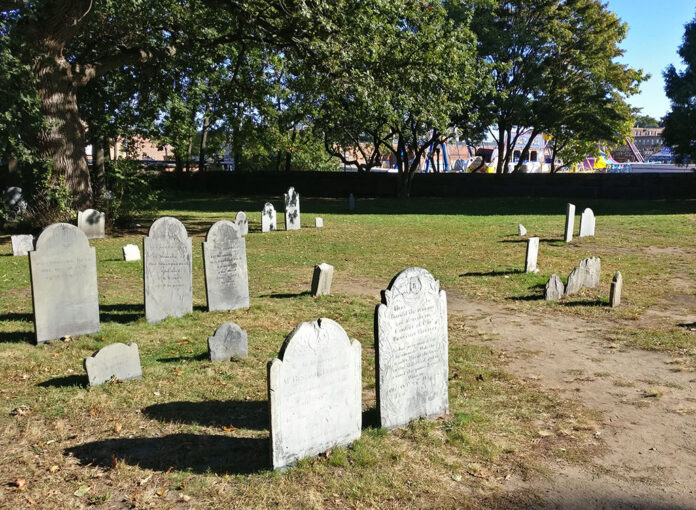 Neither Boston nor Salem, are lacking in the old cemeteries department. Both cities have numerous burial grounds for key players in the early colonial era and American revolution. The tombstones are thin, frail and lean with the wind, they are difficult to read and have unique puritan etchings on them. They are fascinating and remarkable and contain a sense of mystery and wonder!

Old Burying Point Cemetery is the second oldest burial ground in the United States. The marked graves include one of the sailors from the Mayflower and the infamous hanging judge Justice John Hathorne, great-great-grandfather to famous author Nathaniel Hawthorne. There are also many accused witches buried here. Originally, witches weren’t allowed to be given a Christian burial, and so some bodies were exhumed from backyards and even homes, before being moved to this cemetery.

Many areas of New England were filled in through a process originally called ‘landfill’. Before, Salem’s land was filled in, Old Burying Point Cemetery was bordered on one side by the ocean. Between the cemetery and the ocean was a tall thick granite wall that blocked out the waves of the ocean prior to filling in the bay. It still stands here today, though the shoreline is much further out nowadays. During bad storms the waves would breach the wall on occasion, and if the storm was excessive or lasted for days, the grounds would become wet and the water would seep into the graves. On multiple occasions this allowed the buried bodies to drift out of the unearthed ground and be carried out to sea. On a few occasions they drifted elsewhere, such as into nearby restaurants. As such, many of the tombstones in this grave have multiple dates, both of original burial, and of reburial from being moved from homes to the gravesite and/or from the ocean back to the gravesite.

The cemetery is bordered on the south side by the home of the Grimshawe’s. As the story is told, the night Nathaniel Hawthorne’s met his wife, Sophia Peabody, the Grimshawe’s were having a party. Plagued by a headache, Nathaniel took Sophia out to the cemetery in an attempt to help her feel better with a breath of fresh air. It is said their ghosts still roam the cemetery, hand in hand.

This location is also home to the Witches Memorial. It took until 1990 to clear all the names of the 156 people and two dogs that were accused of witchcraft. I have no idea why it took this long, but in the 1990’s when the task was completed it was decided that those hanged for witchcraft should be honored for their sacrifice. (There is so much wrong with this.)

Completed this year, in 2017, a stone wall memorial with ledges protruding from the sides was erected. Each stone bears one of the names of each of the nine accused who were ultimately hanged as witches. The memorial is at Proctor’s Ledge on the edge of the Burying Point Cemetery, confirmed as the actual location where the hangings took place. It’s a bit unnerving to walk in the very spot where such atrocities occurred, looking upon this place in both reverence and horror.

► For Kids: Old Burying Point Cemetery is a very small and unique burial ground. It offers a chance for deep reflection, or casual observance. With such a vast spread of graves here there is an opportunity to learn about Colombus’ discovery of America plus the sorted past of Salem. It is not spooky and in fact, is quite peaceful.

We really enjoyed traversing the grounds of the Old Buying Point Cemetery and Witches Memorial in Salem, Massachusetts. Have you been to this specific cemetery? What was your opinion of the memorial and gravesites? We’d love to hear your take on it.

► Nap-Time Version: The graves at Old Burying Point Cemetery include a wide spectrum of persons from affluent judges and sailors, to the accused witches of 1692. A definite must stop on your visit to Salem, Massachusetts.

Check out our other activities here in Witch City, including the Witch Dungeon Museum, Howling Wolf Taqueria, and the Tales and Tombstones Haunted Trolley Ride.