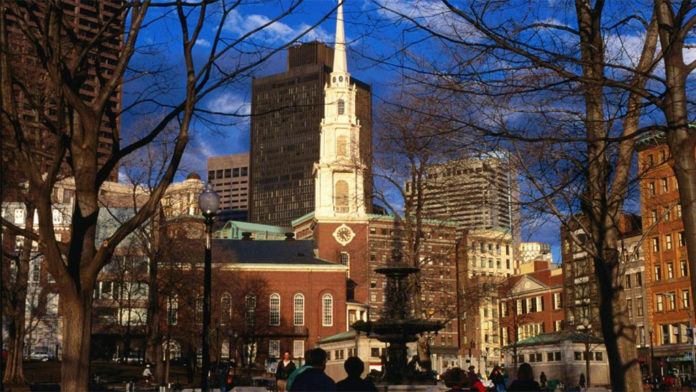 At the time of completion in 1809, the Park Street Church was the tallest structure in Boston. The steeple itself stood 217 feet tall. Until the year 1867 no matter where you stood in the city, or if you arrived from the water, you would be able to see the steeple of the church. Today, the steeple is a bit smaller but otherwise the church remains in its original condition.

Currently, this church has a congregation up to 2,000 members for Sunday service. It’s long standing theological history began in 1809 as an attempt to preserve Trinitarian theology during an era of growing Unitarianism. It is said to be the site where social justice began in this country. Just some of the historical markers The Park Street church has been involved in include:

But before all this happened, this site was originally used to house a granary. Next door was a workhouse, an almshouse, and a prison. After the New Massachusetts State House was built these buildings were cleared out to make way for more suitable neighbors.

► For Kids: Boston epitomizes fighting for what you believe, but there is no better place on the Freedom Trail to teach kids about activism than The Park Street Church. So many wonderful advancements in our modern American society started right here on the steps of and inside this beautiful church.

Because we visited during October, this was another stop we didn’t get the opportunity to tour inside, and there was significant construction being done to the exterior. We didn’t feel as though we got the best view of this site, but we appreciated being here nonetheless. Owing to it’s unique importance throughout history, author Henry James termed the church, “the most interesting mass of bricks and mortar.”