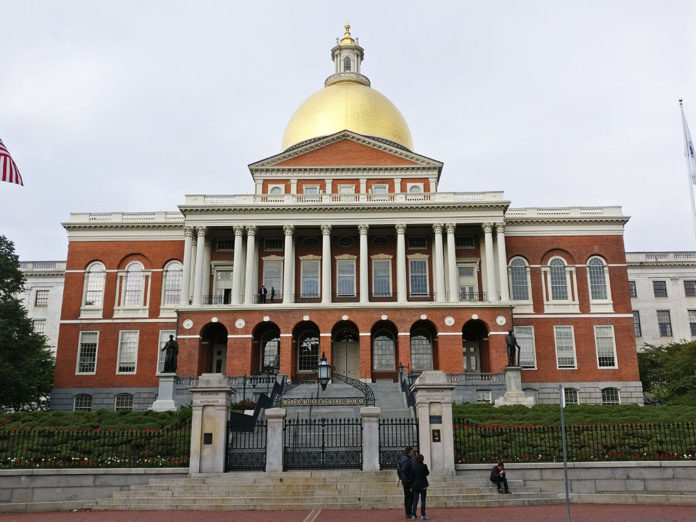 At the top of the hill at Boston Common you can’t miss the New Massachusetts State House with her 23K gold gilded round dome roof. In 1795 Samuel Adams, Paul Revere and William Scollay watched as 15 white horses, one for each state in the Union, pulled the cornerstone up the hill containing a time capsule. It was first opened in 1855 and again more recently in 2016 at the Museum of Fine Arts, 221 years after it was originally buried. Inside were coins, newspapers, a medal of George Washington and a silver plaque engraved by Paul Revere. Treasures at the time, dedicated to the most beautiful and prominent building in the nation.

The hill the New Massachusetts State House resides upon is one of the three remaining hills left in the city. Most of Boston’s hills were leveled to provide land 570 acres of land to fill in the back bay and expand the city. Known as Beacon Hill, this hill is considered the most attractive place in the city. Along with the state house, prominent homeowners such as John Hancock also had homes here (though his house was demolished in 1863).

We were not able to tour the Massachusetts State House as it was closed to visitors, but we did learn a lot about its history. More importantly we were able to see and touch the Shaw/54th Regiment Memorial across the street. This memorial, designed by Augustus Saint-Gaudens, the most prominent sculptor at the time, consecrates interracial cooperation during the civil war.

This building, like most sites in Boston, is steeped in history. The original building was just 61 feet deep noted by the visible exterior red bricks; everything else on the building was added 100 years later, after 1895. During World War II, the gold dome was painted black to prevent reflection and deflect aerial bombs. Up the grand staircase inside are the central entrance doors of Doric Hall. These doors are only used on three occasions: visiting Presidents, soldiers returning from war (which hasn’t happened since Vietnam), and departing governors given the boot as they leave office. In the House of Representatives’ chamber a life size carving of a codfish hangs on the wall. During one visit, Davy Crockett commented that he too kept reminders of the importance of the land and the sea in his residence.

► For Kids: This stop offers kids a chance to see how traditions are carried through today. From how elected officials operate and carry out their duties, to how they leave office once their tenure is over. This stop also offers particular historical visuals from the construction of the state house, to the civil war monument, to how the gold plated dome was used strategically to prevent war attacks. From this vantage point you can also learn how Boston was built, literally, by dispersing the land.

Were you able to tour the Massachusetts State House? Was it as lovely inside as it is outside? Let us know all about it in the comments.

► Nap-Time Version: Anecdotes and history of the Massachusetts State House on the second stop on the Freedom Trail.