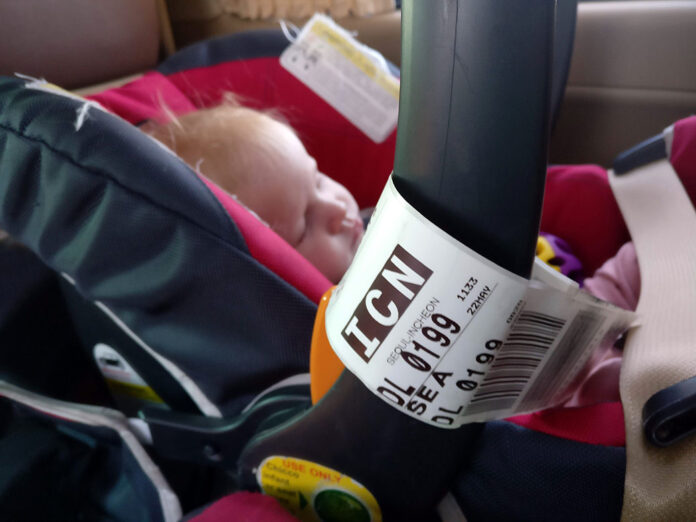 Getting ready to leave for a trip is no small joke, but getting ready for leave for nearly 3 months? That’s intense. Gabriel is teaching this summer at the Incheon Global Campus in South Korea, and our family will be traveling to Korea and living in Songdo from May until August.

We have a list at least 3 miles long and are slowly ticking off the tasks. Like selling our family chickens, which was accomplished with many tears; finding a temporary home for our beloved dog, Danger thanks to our generous nephew; knocking down the second to last wall in our upstairs and finishing the flooring from the hallway to the entryway might not have been imperative; avoiding using our front door because a Mama bird laid her eggs in there was only reasonable; getting Miss Molasses’ six month pictures the day before we flew out because I knew I’d regret it forever if I didn’t; and of course Widmore’s first guitar concert was incredible and I couldn’t be more proud!

I legitimately could not be more proud of this little guy right here. He performed in his first guitar concert yesterday playing Pearl Jam’s “Last Kiss”. • Like a boss. He was awesome! I don’t even think he was nervous! He told me he didn’t even have to look at his strings. • He’s not lying. He walks around the house strumming his guitar and coming up with melodies from the dozens of chords he knows. Especially for his baby sister. • At 8 years old, he’s totally got it. • Widmore took up guitar when he was 6, but between a couple moves and traveling we were not super dedicated. Until we met his current teacher Dean (pictured to the left). • Dean has introduced him to Pearl Jam, John Mayer, America, The Wallflowers, and more. Widmore memorized 4 different songs by the time of his 8th birthday. Dean has ignited a passion in this awesome little guy that I can’t wait to see where it takes him. • Rock on, man. ** ** ** ** #diapersonaplane #worldschool #worldschooling #worldschoolingmusichistory #music #guitar #musicskills #guitarist #pearljam #wallflowers #eddievedder #lastkiss #johnmayer #loveontheweekend #concert #musicconcert #schoolofrock #rockon #loveofmusic #instamusic #euphonicmusicschool #goodteachers #tempo #passion #proudparents #proudmama #success #hardwork #musicislife

A couple things we didn’t get to, like recovering all our Atlanta photos from Spring Break which will just have to wait for another season while I try to put it out of my mind.

These things are easy. Sure there are a lot of tasks, but each one can be accomplished from start to finish and crossed off the list.

What to Pack to for a Summer in Korea

Packing, on the other hand, felt like an impossible task that would never be done. Because of that, I didn’t want to do it at all. I like to past last minute and jump on a plane, but this felt too daunting. It felt like a huge burden to pack for our entire family plus a baby, to travel to Korea for three months.

We are light packers. We take the bare minimum and make due. That is in large part due to the fact that we are traveling. Traveling means roaming and moving from place to place, never stationed anywhere for long.

For this trip, however, we weren’t just traveling to Korea. We were going to be living in Korea. We knew we’d be in one place from May to August and wanted to have some things that would make us more comfortable. Like favorite blankets, enough clothes that I didn’t have to be doing laundry every minute, and clothes for Sunday Church in Korea.

In the end, for this trip we ended up with four large suitcases to travel to Korea! That’s insane! Although to be fair, one was strictly just for having an empty suitcase that we could bring home souvenirs in. Then we had a carry-on for each of the kids: one with medicine/vitamins, one with snacks and one with toys our four year couldn’t bear to part with. We also had to bring an extra carry-on for electronics and a blue yeti for our podcast.

Leaving for the Airport to Travel to Korea

Then we spent the next three hours wide awake hoping we didn’t forget something that we wouldn’t be able to get in Korea. Then we were worried our alarms wouldn’t go off and we’d miss our flight! Of course we always fly standby, but since this was a working trip we got actual tickets with seat assignments! You’d think that would lower our stress level, but it actually made it more stressful than ever!

If you miss a standby flight, no big deal – you just take the next one. If you miss a confirmed flight, it’s a big mess.

Our route took us from Salt Lake City to Seattle and then Seattle to Incheon, South Korea. We couldn’t fit in just one Uber XL with all our luggage, so Gabe went with the two little girls first and ordered a Lyft to take me and the twins right behind him. We met up within a few minutes of each other at the airport much earlier than we have ever arrived in eight years of family travel, and waited around for an eternity for our flight to travel to Korea.

We flew on Delta for both legs, and the first flight was short and uneventful – as you can imagine. We got a breakfast burrito in Seattle and quickly boarded our next flight. The aircraft was a 2x3x2 configuration. We were seated in two center rows one in front of each other.

The twins took the caboose and I barely heard from them the entire flight. They played Go Fish, managed their own snacks, battled against each other in Tetris, watched movies, drew pictures, and took a few naps during the 11 hour flight. Traveling to Korea with eight year olds is easy!

Gabriel and I were sandwiched between Eclair and took turns with Molasses. Traveling with 8 year olds may be easy, but traveling with a six month old is significantly different. Especially traveling to Korea on an 11 hour flight.

Since Molasses was born, she’s been on 5 flights. The flight from Seattle to Seoul is her 7th flight! And definitely the longest by over 6 hours. She did remarkably well.

Our last big family international trip was two years ago to Japan. Eclair didn’t remember eating on a flight before, and thought it was so special to be served a meal on the airplane! She played on an Ipad, watched the animated Beauty and the Beast three times, alternated between mine and Gabriel’s phones, played with her dollies, and took Molasses whenever she wasn’t crying.

Molasses played on the floor between my legs, made friends with Diane the flight attendant, walked with me and Dad up and down the aisles, nursed and napped often, chewed on the seats, only had one blow out and mostly was a perfect angel for the entire 11 hour and 19 minute flight traveling to Korea.

Other than being absolutely exhausted, everyone did better than I could have hoped for. Every time we take a long flight I wonder how we do it, and then don’t remember one second of it afterwards because it’s a drop in the bucket compared to the amazing adventures we get to have once we land. Flying is both the greatest and the worst invention ever created. Emphasis on the greatest of course.

There wasn’t a single person in line at customs when we landed, and our luggage was wrapping its way around the carousel when we arrived at baggage claim. We’ve never, and I mean never, have had an arrival go so smoothly. Usually we are at our wit’s end and gritting our teeth to prevent yelling at each other over things that only feel important because of how tired we are.

In Spain we were able to track down our lost luggage over the phone in the time we spent waiting for customs. In Tokyo, we were sure we were going to miss our connection to Hiroshima and had to be extremely assertive so that we didn’t get shoved aside. In Germany I was sure we would miss our connection to Norway while everyone was crawling from each checkpoint and security was inspecting every tiny inch of our belongings.

Traveling to Korea though, we practically breezed through without a second glance. It was glorious.

Getting to our New Home in Korea

I didn’t miss having to navigate our way to our airbnb by ourselves, not even one little bit! Having a local with a sign with our names on it waiting for us once we emerged from the airside of the airport was about as luxurious as anything I’d ever experienced before! He even took our luggage and carried it to the limo taxi. I felt like a celebrity. No sloughing it for this family!


Of course we weren’t staying in an airbnb, but faculty housing at the IGC Campus. The taxi the school ordered for us was called a limousine, which I know is really common in foreign countries and doesn’t mean what it means in the US – but this really was a limousine. There were plush leather bucket seats, curtains on the windows, and ceiling disco floor lighting.

Our New Home in Korea

We were dropped off directly in front of our new home for the next three months with two local guides, Jason and JJ, to help us with anything we needed.

We took everything up to the 5th floor of the IGC faculty housing and took a quick tour of our two bedroom two bathroom apartment. Then we took a guided tour of the campus.

After the local tour was over, we headed across the street to check out our surroundings to waste a few hours before we could go to bed for the night. We wanted to try and adjust to our new time zone as seamlessly as possible and beat the jet-lag. We were pretty haggard. We were nothing more than zombies.

At 7:30pm we crashed and woke up feeling a lot better at 4am. We know it’s going to take a minimum of three days to even remotely adjust. I for one am looking forward to not waking up at the crack of dawn.

Our Korea trip is now complete! It was as epic as we imagined it would be.

Check out everything we learned living in Songdo, worldschooling the Korean culture, grocery shopping in a foreign language, eating our weight in Korean’s Greatest Dessert Bingsu, and straddling the North Korean border!