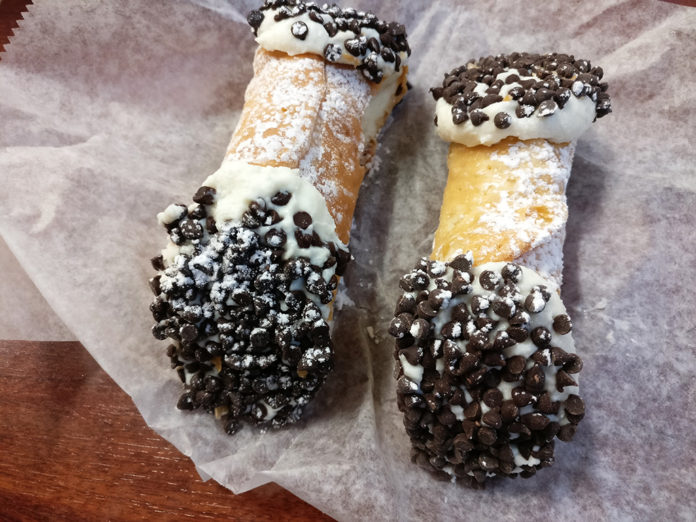 At the end of Hanover Street in the North End of Boston, Massachusetts an old rivalry has been brewing since 1946. A sweet, crunchy, chocolaty rivalry between Mike’s Pastry and Modern Pastry. A line has been drawn and you must choose a side. Who has the best Cannoli?

The North End is one of the furthermost stops along the Freedom Trail that runs through Boston, Massachusetts. It is located between Paul Revere’s House and Trinity Church. It is the epitome of Little Italy.

Mike’s Pastry has an old local charm to it. The shop is bright from the moment you step inside.

The walls are painted white with oversized decals of cannoli bordering the ceiling. There is full lighting in the shop and the case, giving you a great view of all the incredible pastries offered here.

Their recognizable signature blue and white circular baskets of string hang from the ceiling to tie up your goodie box.

The employee’s here are almost as sweet as the pastries; friendly, encouraging and helpful, with a little bit of that Boston edge.

Mike’s Pastry is crazy busy, all the time, but there isn’t a formal line. In fact, if a formal line starts forming, the employee’s will encourage you to get out of line and come to the counter to take a look and order.

On the flip side, literally it’s right across the street, Modern Pastry is dimly lit, much smaller in comparison, and feels a bit stuffy (or chic depending on your point of view). There is a formal line here, and the employees aren’t nearly as friendly.

They have just three cases of refrigerated pastries, including many of the same items, just on a smaller scale. Plus, the pastries at Modern Pastry are smaller and they are slightly more expensive than at Mike’s Pastry, though they do fill the cannoli upon ordering.

All that is fine and all, but this rivalry doesn’t just come down to these two mere pastry shops. No, it’s narrowed down specifically to a competition between Cannoli and Boston Creme Pie.

Side by Side Comparison

We did a side by side comparison of the two, where Mike’s was the clear winner! Watch our taste test YouTube video to find out why!

Ever since doing this taste test, the kids want to do one for every single place we eat! We also ordered a slice of Dark Chocolate Cake, and a Peanut Butter Brownie from Mike’s Pastry. Both were excellent! I really wanted a Cream Puff from Modern Pastry, but Gabriel turned out to be the voice of reason.

► For Kids: Both upscale pastry shops feature dozens upon dozens of delicious treats that kids to adults will have a hard time resisting. Starting around $3 it’s an affordable way for the entire family to enjoy a sweet snack, and for kids to get a true tasty of Little Italy.

Have you been to Mike’s Pastry or Modern Pastry? Are you cheering for the red, or the blue team? We’ll still like you even if you prefer Modern, we’ll just question your judgement.

Check out our other favorite activities in Boston including a Duck Tour, our family field trip to the Museum of Fine Arts, and our day spent in Salem, Massachusetts.