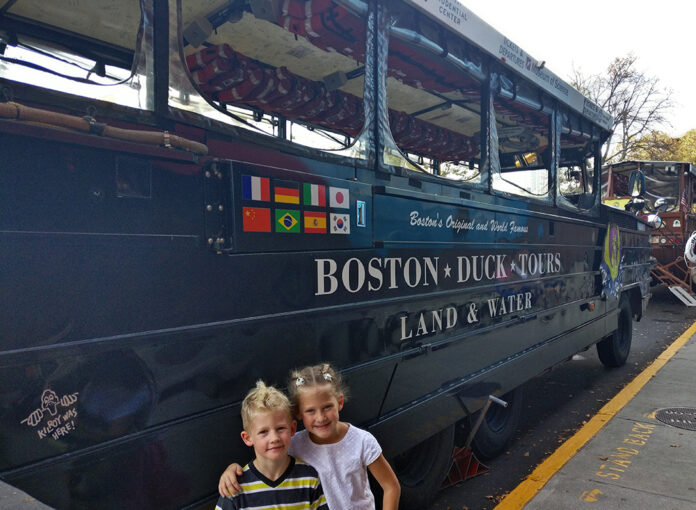 While touring the Kuranda rainforest in Cairns, Australia (post coming soon) we had our first encounter with the DUKW. This is an amphibious vehicle that puts the all terrain, in all terrain. DUKW is not an acronym, like you might think, it’s actually the manufacturer’s factory serial letters. This bad boy can cover any swath of land you throw at it and crush it. It works on land, or on water, and operates with a crank and a push lever. DUKW vehicles, colloquially known as ducks, were primarily used during World World II, whereas nowadays they are used primarily as tourist attractions. This week we toured Boston, Massachusetts with Boston Duck Tours through Beacon Hill, the West End, and into the Charles River dividing Boston from Cambridge.

Boston Duck Tours is the only company in Boston that provides both land and water tours of Boston on the DUKW. They have 3 location departures: The Museum of Science, The New England Aquarium and the Prudential Center. We chose the Museum of Science because it is the only location that offers the family discount price, saving us $23.

The stage is set. Justine Time is our time traveling navigator and narrator. Coming from the future, she has traveled back throughout time and is a well rehearsed and well educated historian. She’s stuck in Boston currently giving Duck Tours because her time machine is broken and they are working on restoring it at the Museum of Science. She couldn’t tell us when humans discover time travel, but she could tell us our generation was close to cracking the code.

Our Duck Tour started by crossing the Charles River Dam Bridge with the Bunker Hill monument jutting skyward out the left side of the DUKW. We traveled through 36 historical sites throughout Boston and learned about their history.

One of our favorite things to see and learn about on our Duck Tour included seeing both JFK’s summer residence, and his favorite place to eat: Union Oyster House. JFK has recently become our favorite US President. Though his personal morals could have done with a little improving, his dedication to ending corruption in government is pretty stellar.

We also got to see the The Bull and Finch Pub, which is the original Cheers, on our Duck Tour! Yay for iconic, pop culture sites of America!

In the West End, we got to see The Last Tenement standing. It offers a striking juxtaposition to the newer high rise buildings. It is the final four story, three window skinny structure left from the gentrification of the 1960’s.

The Trinity Church and her reflection in the John Hancock building has no match. Her spires, Tiffany windows, and phenomenal architecture are why the John Hancock was built at an angle and with mirrored window panels to share the church’s reflection. Nothing can strike out her majesty or beauty, even if it tried.

After our land vehicle magically transformed into a water one, Justine Time moved out of the driver’s seat and gave each little child onboard a chance to drive the DUKW. It was pretty special. She even let the little babies come up with a parent. They were able to sit in the big drivers chair, steer the boat, and be the captain for a fair amount of time.


The Boston Duck Tour gives insight and information about the city itself, her history, and the story of her growth throughout the nearly 400 years since her founding. Learning about the numerous historical buildings in the city was enriching. Without this tour, these are buildings you would simply walk past without so much as a second glance. It was also so nice to be able to cover so much of the city with so little effort. After walking around Boston for several days, it was a welcome reprieve.

Duck Tours depart every half hour March 21 through November 26. Our departure was at 4pm, which was pretty late into the day. We were stuck in rush hour traffic, the sun was glaring in our eyes the entire ride, and the streets were so busy it was sometimes difficult to get a good view of the sites and attractions. We definitely recommend going early afternoon if you can swing it.

► For Kids: The Duck Tour is a great opportunity for kids to learn about the key points in Boston, and consequently early American history. We completed this tour before walking the Freedom Trail which gave us a basis for understanding the layout of the city and a sneak peak into what we had in store on the trail. The tour guide is open to questions, and keeps the information entertaining and easy to follow. The DUKW has no windows, and no seatbelts. Kids will love bouncing up and down in the seats and having a clear view of everything. Entering the water is a convincing magic show and is exciting and fun to experience for all ages.

Have you taken a Boston Duck Tour, or ever ridden in a DUKW? What did you think was the best part? Why did you love it? This tour reminded us of our water tour in Chicago. We didn’t take a DUKW in Chicago, but we did weave around the Chicago River and the huge skyscrapers that all the Transformers destroyed.

Check out the other fun stuff we did in Boston, including the Museum of Fine Arts, Candlepin Bowling, and walking the Freedom Trail, of course!