Home Are We There Yet? Airports When A Multi-Millionaire Serves Your Child Raw Chicken: BOS, Boston Logan International... 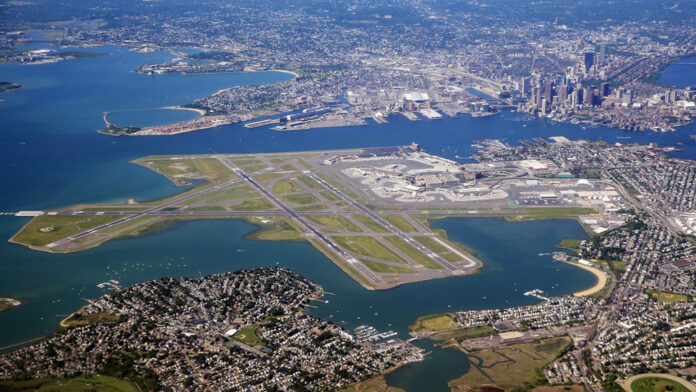 What happens when the highest paid actor in the world, worth $225 million dollars, who typically plays roles as America’s hero, none other than Mark Wahlberg, serves your kid raw chicken at his mediocre restaurant at Boston Logan International Airport, BOS? He doesn’t give you a refund, that’s what. That extra $30 is going to bump him off the Forbes list.

It’s not fair to give the entire Boston Logan International Airport, BOS, a #stinkydiaper review. There are a ton of places to shop and pass the time in each terminal at BOS. Every terminal but E has a kidport, Boston’s pint sized play area for tykes. BOS also offers free wifi, an off site car rental center, and tons of great eateries; it’s just Wahlburgers isn’t one of them.

We’ll get to the story in just a minute. First let’s cover the basics of BOS, It is officially named the General Edward Lawrence Logan International Airport, airport code BOS, though the airport is known by most people as Boston Logan. It’s the largest airport in Boston, Massachusetts and the entire New England area, serving a wide variety of domestic and international destinations with the whole gamut of airlines (over 40) that fly to/from here. There are four terminals: A, B, C which swallowed up Terminal D, (where Wahlburgers is located) and E, with 94 gates total.

There are several ways to travel to/from BOS, or several ways to avoid Wahlburgers. Two subways lines serve the airport: the blue line and the silver line. Alternatively, you can also take a direct express bus that is $7 without a Charlie Card, or only $3 with one. BOS also offers a water taxi into the city for a fee. The airport itself is not particularly easy or difficult to navigate. It does resemble a bit of a maze with twists and turns, and none of the terminals are connected post security. To travel in between terminals you can take a bus, or walk less the than 10 minutes between terminals.

We ate at Wahlburgers during a layover traveling between Washington D.C., DCA, and our home town airport Salt Lake City, SLC. In my ripe youth I was a huge fan of New Kids on the Block, Gabe and I both transitioned along with Marky Mark during his glorious rapping days, and we’ve enjoyed a couple of Mark Wahlberg’s decent movies over the past few years. More than anything, we had a novel desire to try something we couldn’t get back home.

Everything we wanted to order was unavailable. They were either out of it, hadn’t stocked it, or the cooks couldn’t make it. They didn’t have their signature Fluffanutta, sweet potato fries, mac & cheese,… in fact, the only thing they had were hamburgers and chicken tenders, so that is what we were relegated to order.

Our server was completely inept. She was an older woman who had no idea what was going on. She came back every 5 minutes to give us an answer as to whether or not we could order something, or if they had a substitute for the “government cheese”. She was struggling so much, she spent more time running to the back than serving us.

The food we did manage to receive was terrible. The hamburgers were dry. They didn’t have any unique features or flavors, and we struggled to figure out why the Wahlberg’s didn’t just stick to singing and acting. We choked down most of the meal and then it was time to head to our gate. We took the rest of the kids meal with us for them to finish eating while we prayed for our name to be called from the standby list. Our teeny baby, who was just 21 months at the time, was finishing the last chicken, and took a bite just as we happened to look down at the piece she was holding.

The chicken was raw!

Not slightly pink, it was completely, utterly, totally RAW! We hurried and bought a Coke to try and chase down some of the bad bacteria as we were about to get on a flight and had no other recourse! Our poor baby not only ate raw chicken, but then she had to drink Coke to kill all the bacteria! Talk about an old one two punch!

I headed back to the restaurant, raw chicken in hand, to talk to the manager. I thrusted it in his face. He acted as horrified as I was, and admitted that it was unacceptable. I couldn’t help but roll my eyes. He promptly told me he would refund my money, and took my card into the back room. When he came back out, though he didn’t have a receipt to offer with the refunded proof, he swore up and down he completed the refund. Our flight was nearly about to depart and I had to get back to the gate to listen for my name; I didn’t have time to hold him to it.

Weeks passed and yet, the refund never showed! I called corporate offices day after day after day. I tweeted Wahlburgers, even posting on each of the Wahlbergs personal accounts, including Jenny McCarthy. I tagged them in a Facebook post. Not a single person could be bothered to respond. So, I eventually called the health department and felt mildly satisfied when they said they would file a report, make a surprise visit, and it would go on their public record. Hopefully I’ve spared another child the same fate.

Are you kidding me? This is what I just pulled out of my 20 month old’s mouth. @mark_wahlberg #Walhburgers #Raw pic.twitter.com/WK9ETY2ldq

► For Kids: Never; unless you want to poison your children on purpose, which is sadistic.

Have you eaten at Wahlburgers? Did you get food poisoning, experience diarrhea or painful stomach cramps and/or forceful vomiting? How much do you agree Wahlburgers should never serve another burger, or piece of chicken again?

Check out the rest of our adventures in Boston, and Salem, including the Boston Duck Tour, walking the Freedom Trail and our favorite new place to eat: Chicken and Rice Guys!