Home Where Are We Going? Asia How to Find the Most Delicious Korean Ice Cream 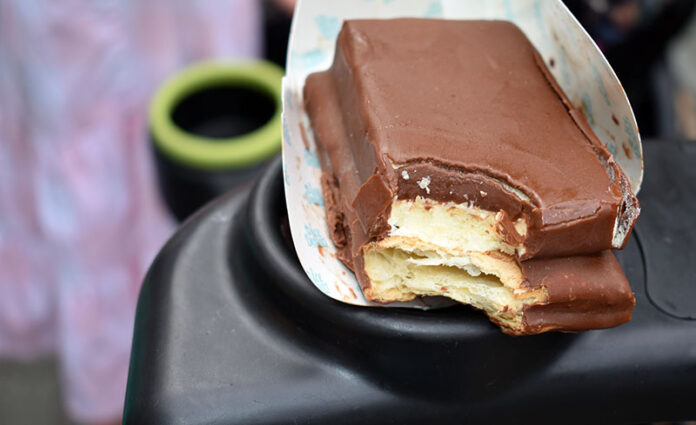 Imagine a miniature version of Willy Wonka’s Chocolate Factory on every street corner, filled with Scrumdiddlyumptious Chocolate Bars, FudgeMallow Delights and Everlasting Gobstoppers…, but get this, everything is frozen.

Every imaginable sweet treat cold as ice and chilling to the touch in a land where everything is popsicles. What would you say if I told you this place exists? It exists in a land where the days are long, hot and humid, and cool frosty refreshment tastes like grapes, and melons, and cherries, and yogurt, and brownies, and macarons, and vanilla and chocolate ice cream.

Pure happiness exists, and it tastes like Korean Ice Cream.

It’s not a dream. This is real life and it’s called the 50% Korean Ice Cream Store. Most of the time, we just called it the Korean Popsicle Store. It’s got a nice ring to it, don’t you think?

What is a 50% Korean Ice Cream Store?

Deep chest freezers line the walls with narrow pathways separating them. They are filled to the brim with brightly colored plastic packages with alluring pictures of sweet frozen goodies. They are organized by size, shape, flavor and type of treat.

Where Can you Find These Magical Stores?

Everywhere. And when we say everywhere, we mean every few feet. These little stores are a huge part of the Korean culture and they are the very key to surviving the hot sambok days of summer in Korea!

You can find one at every subway stop, street corner, mall and business district.

There is Literally a Korean Popsicle Store on Every Street Corner

We lived in Songdo at the Incheon Global Campus, but we traveled all over the country and everywhere we went we found a popsicle store.

And believe you me, we stopped at every single one.

I’m just going to stop there. This list would wrap around the Earth 20x and keep going. If you are in South Korea, open your eyes and you’ll find a Korean Ice Cream store.

How Does a Popsicle Store Work?

Some of the stores are traditional with a checkout cashier.

But many of the popsicle stores are automated self-serve stores.

Instead of a human cashier, there is a self serve check-out. You scan the popsicles, pay, and enjoy your tasty treats.

It is quick and easy, but the machines are all in the Korean language. If you keep pressing the green button you should get through just fine, but if you have trouble, most likely a local will be there to help you press the right buttons if you look confused enough and shrug your shoulders and look around helplessly.

Pretending to tear out your hair can help too. But really, the Korean people are extremely kind and friendly and will have no problem guiding you through the process.

Where is the Best Korean Ice Cream Store?

And no, we didn’t skip the popsicle store just because we’d already consumed two or more giant bowls of Bingsu.

One does not simply skip the popsicle store.

I honestly cannot tell you. We left the LDS temple and were headed to Namdaemun Market. We followed Google maps and ended up on this side street that went through a tunnel and when we came out on the other side we were at the bus stop.

Just before the tunnel was another popsicle store and it sold a brownie sandwich ice cream bar. The. Best. Korean. Ice. Cream. Bar. we ate during our 3 month sojourn on the peninsula.

It was the only brownie sandwich ice cream bar we ever found in Korea.

And boy did we try. We tried to find it again and again, without any luck. And we scoured every single popsicle store in Korea to look for another brownie bar.

We are still looking.

What is the Next Best Korean Ice Cream after the Brownie Sandwich?

It’s almost as good, and if you can’t find the mysterious Seoul popsicle store, you just might not know any better.

But it’s like comparing Willy Wonka to his predecessor Charlie Bucket. Nothing is as good as the original.

Is there a Hack for Re-Creating this Infamous Brownie Ice Cream Sandwich?

The Korean Grocery Store ‘No Brand’ sells a package of prepacked brownies. The Triple Street and Campus Town Ice Cream stores sell a package of chocolate covered vanilla ice cream bars. (You can see these ice cream bars in the video above starting at 2:25.)

Put them together and what do you get?

What Other Types of Korean Ice Cream and Korean Popsicles Can You Get?

This list is by no means exhaustive, but it does represent a small fraction of the varying types of frozen treats you can find in Korea.

How Much Do They Cost?

No wonder we were there all the time.

► For Kids: Ice Cream fairies are real, and dreams do come true.

What is the best popsicle or frozen treat you’ve ever had?

► What We Learned: Never lose track of where you are in Seoul, or you’ll never find the greatest Korean Ice Cream Brownie Sandwich in the world.

More importantly, do you prefer chocolate or vanilla?

► Nap-Time Version: All the insider info you need to find the most delicious Korean ice cream stores.

Don’t miss our post about another type of Korean Ice Cream: Bingsu! This is Korean shaved ice, and it’s Korea’s best kept secret! Don’t miss out on the Perfect Korean Fried Chicken too!