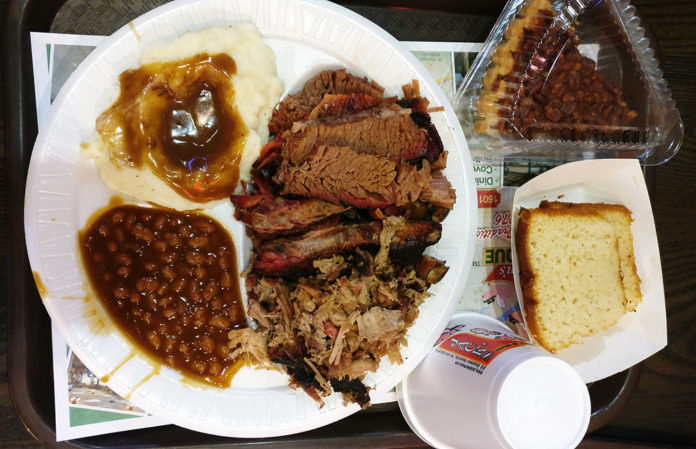 That elusive smoked flavor, the sensation of perfectly succulent meat that melts in your mouth, slightly sweet yet tangy sauce that makes every bite sticky; these are a few of my favorite things when I’m looking to fulfill a craving for mouthwatering southern barbeque. Jack’s Bar-B-Que in Nashville, Tennessee hits every single one.

Located next to the Ryman Auditorium, in downtown Honky Tonk Central Nashville, tucked away amidst all the bars and lounges and shops full of cowboy boots with only a bright fluorescent sign to light the way, you’ll find Jack’s Bar-B-Que. Inside a concrete building Jack’s Bar-B-Que is inconspicuous, unassuming, and unpretentious with too few tables to suit all the hungry salivating patrons and a line winding through the entrance that would rival a hot summer day at Disneyland.

Jack’s Bar-B-Que offers magical spices, smoked elixirs, and potions of meat. This was our first venture into Nashville cuisine and it left the most lasting impression. Jack’s Bar-B-Que has been featured on Food Republic, Eat Your World, Thrillist and The Culture Trip continuously ranked as the best bbq in Nashville.

I ordered the three combo plate with brisket, pork shoulder, St. Louis style ribs, baked beans, mashed potatoes and gravy, cornbread, and pecan pie. Everything is cooked to perfection, but when I’d finished the brisket I’d wished I’d ordered a three combo plate with only brisket piled high and steaming. It melts in your mouth and disappears down your throat in the most satiating way. I wanted to lick my plate. Actually, I did. The beans are sweet and filling, the mashed potatoes taste like grandma made them, the cornbread holds together to soak up the sauce, and the pecan pie is thick yet buttery.

To accompany your meal, Jack’s Bar-B-Que offers six different Bar-B-Que sauces from mild to 911. The menu is rounded out with smoked turkey, texas sausage, chicken, cole slaw, mac and cheese, potato salad, corn and chess or fudge pie. Each meal comes with two sides and cornbread, of course.

► For Kids: Only bring them if you are willing to listen ever after to the cries of children that are longing to come back and enjoy the best Bar-B-Que in Nashville.

I came here with a friend during a girl’s weekend, and my only disappointment was that I felt guilty about enjoying such a delicious meal knowing how much Gabriel would have loved it.

► Nap-Time Version: Bar none, Jack’s Bar-B-Que is the best Nashville has to offer.

Check out our other adventures in Nashville eats, including 100 layer doughnuts at Five Daughters Bakery, and Bonuts at Biscuit Love.