Home Where Are We Going? Asia Expat Life in Korea: Adventures in Going to the Theater 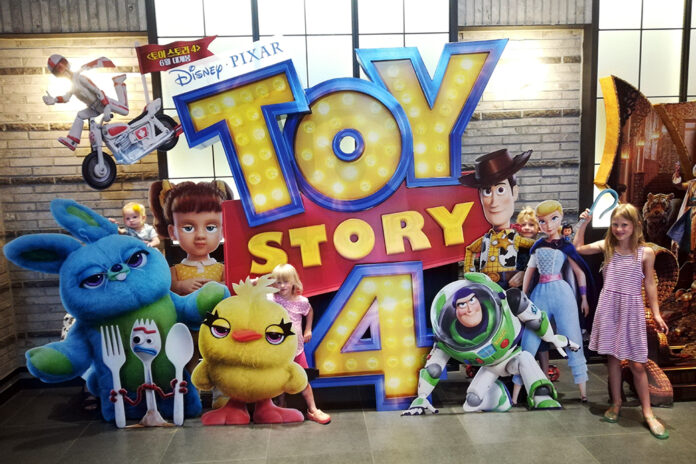 Today we went to the movies to see Toy Story 4, which sounds simple, doesn’t it? As an Expat in Korea, everything is complicated. If you think going to the movies in South Korea is simple, you are so wrong.

Not just wrong, but so wrong.

It doesn’t help that we don’t speak the language and that we are notorious for just being all around dumb, but I don’t think this time it was all our fault.

Expat in Korea:
Adventures in Going to the Theater

This is the second time we’ve tried to see a movie as expats in Korea. Shortly after we got here, we tried to go see Aladdin but because it was so complicated we just came home.

This time around we thought we had a better grasp of the nuances of the culture.

Much like in America, you purchase your tickets for the movie at a touch screen kiosk.

Except unlike in America, nothing is in English. There is no American or British flag in the top corner, or any flag of any nation. Nor are there any universal symbols to indicate payment, or maybe a thumbs up, you selected a movie icon! Yay!

No it’s just all in Korean.

The movie options were images of the movie posters, and the times were numerical. Fortunately I’m a whiz at military time. Then, we just kept pushing the button on the right. Because the right side typically means forwards. It worked!

Snacks at the Movies in Korea

Then it was time for snacks. At the movies in South Korea your movie treat options include:

Purchasing snacks is also done via automated touch screen kiosks, and there are also no friendly flag language options either.

During our time here as expats in Korea, and elsewhere on our travels, we use Google Translate whenever a conversation involves more than what can be communicated through pointing and gestures.

It works for the spoken language as well as the written language. The app has a camera option that scans the writing in real time and changes the image on your phone. Except, it sucks at symbolic text.

In Korea, it tells me french fries are body select, which I guess is more right than wrong.

It did however manage to tell us what flavor combinations of popcorn were available and between garlic, normal, cheese, and caramel we choose normal and caramel and fuddled through the ordering process once again.

After ordering on the kiosk we were issued a number and waited for it to be called. Simple enough, but it took forever.

Then Molasses had a poopy diaper and I had to change her with barely enough wipes to finish the job.

Okay, though this isn’t part of being an expat in Korea,  it’s important because by this time we were just a little bit late for the start of the movie.

Where is the Theater?

We still have to “travel” to the theater. Yup, in Korea the theaters are not on the same level as the tickets or concessions. You have to go up two more floors to reach the movie theaters themselves.

Now, just a few minutes prior to this Gabriel and I had a debate about which of the eight movie theaters we thought the movie was in.

Gabriel insisted it was theater #4.

He assured me he double checked with the popcorn vendor so, we went into theater #4.

Previews were beginning and so we quickly took our seats and settled in.

Except these weren’t previews. At the movies in South Korea they play commercials – for 30 minutes!

Yes, for 30 minutes prior to the start of the film they play commercials at the movies in South Korea. And not just that, but they play the same commercial three times in a row! It was this odd mix of brainwashing slash subliminal messaging slash hypnotic trance voodoo magic.

We saw three ads for a neckleray. A neckleray is a cangue that goes around your neck while you close your eyes. When you take it off you stroke your neck elegantly while showing off your bowl cut.


If a business man gives you 5 bananas and holds up his hand indicating you should stop talking and look through paperwork, you are getting 5g service for your cellphone.


We did see one actual movie trailer for the new John Wick 3 movie. It is dubbed in Korean, and the only intelligible English word said by Keanu Reeves is the number 2. Which we can only assume means he has to go to the toilet.

Speaking of the toilet, we learned about the Butt Detective from Japan. Oh yes, it’s a real thing and he’s solving cases with a poof! Get your kids the Detective Butt book series or the Season 1 DVD collection today!


Remember our favorite new airline, Jin Air? Not only are all Inflight crewmembers trained for safety in the sky, but they also train to be firefighters before kissing their children goodnight.

And G-market has luggage that will make you say Damn.


These are the rewards for being an expat in Korea.

All the while, Widmore is guarding the popcorn because no one is allowed to eat it until the movie starts.

Finally the movie started. And it was not Toy Story 4.

40 minutes later and we have successfully not eaten any popcorn, and sat in the wrong movie theater for 40 minutes.

We went back down the two flights of stairs to request a refund. The woman at the counter was not helping anyone, so I went up to talk to her. She pushed me away pointing across the counter.

We looked around trying to figure out what that meant because the lobby was deserted.

Finally, we found a ticket machine that dispensed a ‘take a number’ ticket. After we got a number, then it was our turn.

We explained the situation using the Google translate app and this time she circled the theater number on the ticket stub/receipt and issued us new tickets.

Back to the Theater

We went back upstairs to the theater level, 15 minutes early this time, and found a ticket checker with a rope across the hallway.

We were informed that no one was allowed in the theater until just 10 minutes before the show.

So we went back downstairs and got more popcorn. Cheese and caramel this time, which tastes nothing like the delicious GH Chicago Mix that no one says I’ve had enough of this stuff after 32 bags of it.

Gabriel was also finally given a Korean name. A few days ago we learned that if you are Korean and you go to America, you are given an American name while living there.

Well, today, Gabriel was issued a Korean name. That name is Daybro. He was issued this name when the kids were parking their scooters at the movies in South Korea. So many interesting things in that sentence.

Finally, we were allowed in the theater and 10 minutes later the ads started. The same 30 minutes of ads on repeat. That is two hours of our lives we’re never getting back.

► For Kids: We loved Toy Story 4, and we loved watching it in our native tongue!

What’s the dumbest thing you’ve done as a foreigner or expat in another country?

► What We Learned: Always ask questions if you don’t understand. Especially if you are an expat in Korea.

We also learned in Korea that you can take your own food into the theater in Korea!

► Nap-Time Version: All the mistakes you can make when going to the movies in a foreign country.

Check out our other adventures as expats in Korea like How Not to Spend the 4th of July as an Expat in Korea.