Home Where Are We Going? Asia How Not to Celebrate the 4th of July in Korea as an... 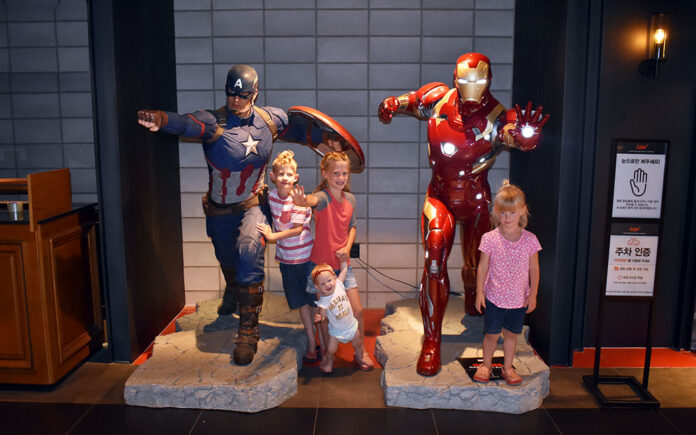 We have had some pretty epic 4th of July celebrations! One year, we flew to NYC to take the kids to the hallmark 5th Avenue FAO Schwarz store for a spontaneous 24 hour trip; another year we spent the summer in Annecy, France and pushed our celebrations out 10 days to match up with Bastille Day; one year, we even celebrated in our nation’s capital, Washington D.C.

This year, being in South Korea we heard from a few people that we could go to the military base in Seoul. To visit Camp Humphries on the 4th of July in Korea as an expat, all we needed was a passport and a state ID.

With that, our family could participate in all the wonderful American festivities there and not even miss a beat being halfway across the world.

Celebrating at the Military Base

Yes, this sounded too easy, so we did some investigating.

The first person who told us about this lived in South Korea just one year ago. He went to the base himself. That seemed like a pretty trustworthy source.

A few threads online indicated his account was accurate, including the USAG Facebook page. Just to be absolutely sure, we even checked with the base and asked them specifically if this was allowed.

They not only assured us it was, but they sent us a schedule of events.

We got our hopes up and dressed up in our best red, white and blue clothes, and we were out the door at noon.

It took a little over two hours to get to Seoul on the train. The friend who attended festivities last year told us which station to take the train to, but neglected to provide any navigational details after that.

We mistakenly figured that meant it would be either easy or obvious. It was neither.

Trying to Find the Military Base in Korea

Spotting a few men in fatigues, we decided to follow them. They didn’t appear American, nor were they speaking English, but we know there are a few thousand Korean military that serve alongside the American military so it seemed as good an idea as anything else.

We also knew the entrance gate we were going to was Dragon Gate, and once outside the subway station one glance around told us everything was named Dragon Gate.

We approached the men in fatigues but they had no idea what we were talking about.

Right then, a nice young civilian man approached us and offered to help. He said that he worked at the base as a translator for a few years and spoke excellent English.

Yet, at the same time he seemed very confused about where we wanted to go, at least to me. There was a lot of looking at phones, pinching and zooming on maps, and discussing back and forth.

Ultimately both the man, and Gabriel assured me they knew what they were doing.

The young man advised us that it was too far to walk and he would assist in getting us a taxi.

That’s when I got mad.

He didn’t want us to get a taxi, he wanted us to get two taxis, insisting that we wouldn’t fit into one.

We’ve been fitting in one taxi just fine since we got here. I didn’t bring my purse or my wallet with us, and I also didn’t have an address or know where we were going. Splitting us seemed like a really, really bad idea.

Gabriel gave me some money, and my phone and the “nice” man I’m going to now refer to as bossy, told the driver where to go. Then he told the second driver to just follow the first driver.

Do you see why I might be mad? I had all the girls, and Gabriel took Widmore.

Then, our driver started to leave before Gabriel’s door was even shut in the taxi behind us!

Then, after we were on the road Gabriel texted me to ask if we had our eldest daughter!

About two blocks down the road, our driver stopped and said we were there. I didn’t know exactly where we were going, but I knew we absolutely were not there. The other driver pulled up alongside our driver and they started yelling at each other.

This was not the fireworks show I was expecting for our 4th of July in Korea.

They blocked traffic for a few minutes before pulling over to the side of the road. At this point I saw Gabriel using his phone to try and tell the driver where we wanted to go.

Another 10 minutes as sitting ducks, and we started driving again.

Somehow, in the next few minutes we arrived at some inconspicuous gate with barbed wire all over it. I gladly got out of the car.

After some much heated yelling between Gabriel and I, Gabriel agreed we would never split up in a taxi in a foreign country under those circumstances again.

Arriving at the Military Base

We walked up the narrow pathway to the gates and found the office by following some girls dressed like it was 1971. I thought maybe we were going to a costume party and not a 4th of July celebration in Korea.

We explained the situation to them and they acted like we were the dumbest people on the planet. “Not since 9/11 has anyone come on a military base without a military escort,” he told us.

So our dreams and plans of jumping on inflatable bounce houses, participating in a watermelon eating contest, watching a taekwondo performance, listening to live music and watching a huge fireworks show for the 4th of July in Korea as expats, were dashed after just three short hours of trying to fulfill them.

It was 90° outside and we were all hot and sweating. We decided to go back to the subway station which like most major stations in Korea was also a mall, to get food and see a movie.

Since it was only a few blocks, and definitely not too far to walk despite what we were told by the bossy man who sort of helped us, we made our way back on foot.

I was still pretty mad about the taxi situation, in part because Gabriel wouldn’t admit or agree that the bossy man, who was very nice, didn’t really help us all that much.

Of course the situation was exacerbated by traveling all the way to Seoul after doing our due diligence and still being shut out of the 4th of July celebrations in Korea by someone pretending they aren’t watching and recording my every move, including watching me through my laptop camera as I type this.

Technically, it’s covered with tape, but if they could they would.

Expats Fighting in Korea on the 4th of July

We got into a huge argument where he said my “details comment” equated to calling him an idiot.

He decided he needed a break and wanted to sit on a bench on the sidewalk for a beat. He was holding my phone because I was wearing the stupidest shorts in the world that don’t have back pockets.

Pie was pleading with us to stop fighting and just be happy so we could celebrate the 4th of July in Korea.

Elevators on the 4th of July in Korea

I cannot handle the elevator here. It’s like the torture machine in the Princess Bride. Each floor sucks one year of your life away.

Unbeknownst to me, before agreeing to meet at the top, this mall has 10 floors. All the kids came with me and we started going up. We stopped at each floor to see if Gabriel was at the elevator. We went all the way up to floor 10.

We never found him, so we took the elevator down to Floor 1. The elevator stopped on every single level along the way. My aggravation was mounting.

We didn’t find him on Floor 1. Of course we didn’t, so then we got back on the escalator and stopped at each floor again until we found him on Floor 4. At the Subway station.

The Subway in Korea

It was too much, and then Gabriel suggested we could see Spiderman back in Songdo and we should do something else. It was 4 pm! We’d done nothing on the 4th of July in Korea as expats but take the subway, walk around, and ride escalators for 4 hours!

The day was a total mess.

Everything we had on our list of stuff we wanted to do was nearly closing like the Kimchi Field Museum, or Kidszania. Other things like Nami Island or Lotte World was a minimum of an hour away.

We finally got some food and just decided to see the movie for our epic expat celebration for the 4th of July in Korea.

And that is how not to celebrate the 4th of July in Korea as an American expat.

Our one saving grace is that the kiosk at the CGV movie theaters in Seoul offer an English version for both tickets and concessions. Finally, one thing went right for the 4th of July in Korea.

We decided to splurge and purchased tickets for the 3D Laser IMAX showing. The movie theater itself was massive. We had to go up an escalator, around a bend, crisscross a few platforms and turn a few corners before reaching our stadium.

There were 4 entrances to our single auditorium, and an attendant handing out 3D glasses like we were at Disneyland.

One interesting note is that in Korea, you can take whatever you want into the movies. You can bring your own snacks, drinks, or goodies and walk right in with them.

We were starving, so we happily brought in candy from Weeny Beeny, Auntie Anne’s Pretzels, and drinks, while also purchasing a Grape Fanta Slushie, squid and popcorn from the concessions.