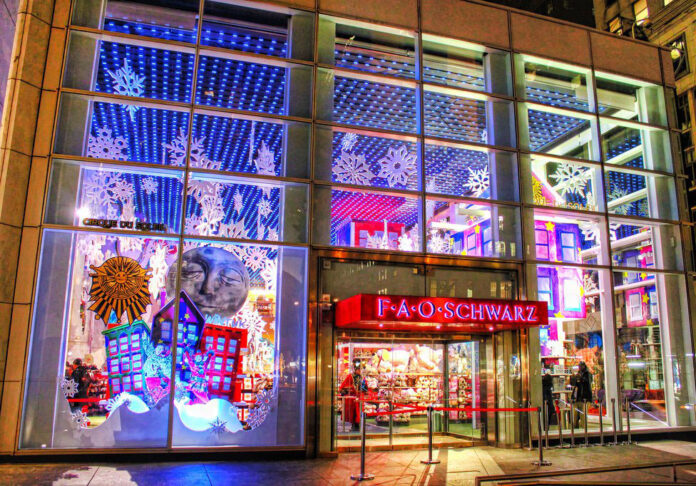 When we got wind that FAO Schwarz was closing its flagship store overlooking 5th Avenue in New York City, we didn’t want to miss the opportunity to take our children to play on the oversized piano keys overlooking Manhattan. There is nothing quite so iconic as playing without limits in the ultimate toy store in the largest city in America.

This was a whirlwind trip! We left on JetBlue Airways on July 3, for NYC on the RedEye departing at 11:25pm and arrived at 5:46am the next day. We planned on coming back the same day we arrived giving us just over 12 hours to play in Manhattan. The flight offered us 4 hours of sleep taking into account the time change. Our kids conked out no problem, but I cannot sleep on airplanes no matter what I do. I passed the time chatting with our Inflight crew, one of whom used to work at FAO Schwarz as a doctor delivering cabbage patch babies! Can you imagine having that as your job? It was so much fun to get to talk to him about this iconic store and hear his fantastical stories.

Because we arrived so early we had a few hours to waste before the massive toy store, FAO Schwarz, opened. New York City is huge, with no shortage of activities, but we wanted to stay close to the toy store knowing we were already low on energy. We began our day in the city by regretting our breakfast choice across from Central Park at Sarabeth’s. Sarabeth’s is your typical overrated and under delivered New York City establishment. You don’t get a lot for what you pay for. Unless you’re thrilled with two pieces of french toast for $30, look elsewhere. Eating here was the equivalent of throwing our money directly into the kitchen garbage disposal.

After breakfast we went over to Central Park. We played on the playground, watched a puppet show, climbed huge boulders, and took in a stroll around the pond on the southeast side of the park passing the time until FAO Schwarz opened at 10 a.m. 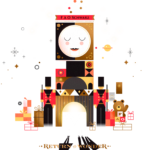 As soon as the clock struck the magic hour we ran straight over to the toy store! Greeted by the full size real life toy soldiers at the entrance we made our way into this incredible wonderland. At the turn of the century FAO Schwarz was known as the “Original Santa Claus Headquarters”. The flagship store located on 5th avenue in NYC had been in operation for the past 30 years prior to its closing. This flagship multi-level store covered every child’s toy and sweet tooth desires with the clever moniker FAO Schweetz. Walking into FAO Schwarz was like walking into Willy Wonka’s Chocolate Factory. Anything you could dream up, was already there.

Everything was larger than life. Walking through the front door, a zoo of full size plush animals greeted you and begged to be petted. Zoltar’s famous fortune telling, wish granting machine was tucked away almost hidden in the back of the store. Every type of candy and confection could be found on the lower level, and in every imaginable size. Up the winding staircase you were greeted by Iron Man himself! There was even a puppet making station! My daughter got a full manicure, with each nail done in a different painted design, at no cost.

Around the corner from here we watched a magic show where the magician helped children perform astounding acts of wonder. A doctor delivered cabbage patch babies to onlookers from their cabbage leaves. We admired dollhouses with every imaginable accessory on display and for sale. Godzillas the size of tiny mice all the way to horrifying looming creatures ready to attack could be found to delight any imagination. There was even the largest reptile and rock collection I’ve ever seen.

We had the time of our lives. We danced on the big piano overlooking the busy New York city streets trying not to imagine what would become of this magical space. Each of our children picked out special toys to remind them of their grand adventure as we weaved through the intricate displays and well thought out designed labyrinth. Of course, we bought gigantic gummy bears larger than our heads to bring home.

► For Kids: This place is full of wonder, joy, imagination and excitement. Its ambition is to bring out the kid in everyone. When this store reopens (slated for this year!), don’t miss any opportunity to go and partake of the fun FAO Schwarz has to offer. Go alone, go with friends, take your kids or Grandma and Grandpa, but go. You won’t regret it.

We didn’t take nearly enough pictures, but we relished every second of our farewell trip to FAO Schwarz. We stayed as long as we could. Our time ended when we were forced to leave to head back to the airport. We stopped for a quick bite at Bare Burger and rode the train back to Jamaica Station at JFK. We flew home on July 4, watching the fireworks light up the sky all the way home. It was the perfect way to celebrate America!

For a great read on the history of FAO Schwarz, check out 6sqft.

► Nap-Time Version: Our farewell trip to FAO Schwarz before its doors closed in 2015.

Did you get to experience this massive toy store on 5th Avenue? It’s reopened now on 30 Rockefeller Plaza! We’ll be checking it out for the twin’s upcoming 8th Birthday! And if you need more toy ideas for grade school boys, check out Temper and Tantrum’s compilation!

Check out State by State’s family trip to New York City checking out all the sites, and our review of Japan’s Largest Toy Store: Kiddyland, in Harajuku Tokyo, Japan.

Everything You Need to Celebrate Christmas in Norway