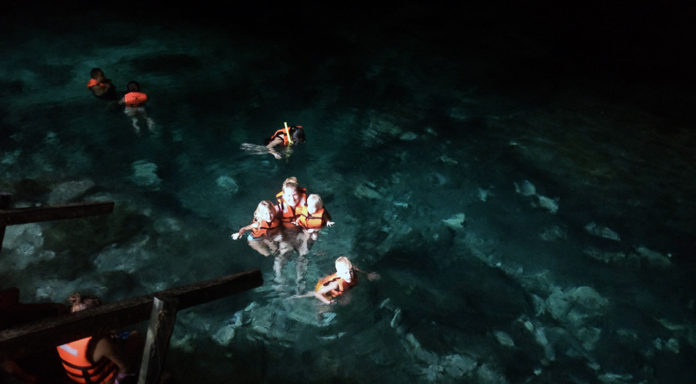 We wasted the day lazily away at Tulum, enjoying every minute soaking up the historical scenery, architecture and powerful location of the most important trade post in the Mayan civilization of the 13th century and didn’t want to stop swimming in the shadow of El Castillo, but nearby was Dos Ojos. Dos Ojos: The cenote with two eyes.

We don’t like to follow a strict schedule when we travel. We typically have a few things here or there that we have our heart set on doing, but we like to discover the culture, the people and the adventure of where unknown roads will lead us. However, on this trip, since we’d never actually planned on leaving the resort we just had this one day to see as much as we could outside the Hotel Zone. We tore ourselves away from Tulum and made the short drive to Dos Ojos.

One of the most famous cenotes in the Tulum and Cancun area is Dos Ojos, and lucky for us, it was located just minutes away from Tulum. These two cenotes are called Dos Ojos because they are at opposite ends of a flat bed of earth. The arched cave walls form spherical shapes, like eyelids formed over the top of an oval eye. The entrance to the cenote is through the whites of the eyes.

The first cenote is small, like a small lake inside in a park. You might even call it a deep pond and you could almost imagine little ducks swimming around in it. The cave wall at the back of the cenote arches upwards along the cliff side and is covered in stalactites. The ground also has a quagmire of stalagmites growing, but the majority of them are covered in water. The water is so clear you can see to the bottom, as it does not extend farther than a depth of about 10 meters/30 feet. There are pockets of ground, sandy beach, and rocks where you can stand, and other parts where the deep bed of the underground lake shows off a diversity of topographical wonders. Schools of tiny fish surround you and enhance the very natural experience. The second cenote is very similar to the first, however, much larger.

The entrance fee is low and offers entrance two different cenotes, just like the name implies. Life jackets are provided as well as lockers for your belongings. There are actually over 28 sinkholes at Dos Ojos throughout the cave system, however, the name describes the two main entrances. The water is warm year round at 25°C/77°F. Despite the warm temperature of the water, it was actually quite chilly at first. It didn’t help that we went in January and arrived as the sun was beginning to set on a rainy day. It didn’t take long to grow accustomed to it though.


The most remarkable aspect of Dos Ojos is not the two cenotes but the miles of cave tunnels that connect the two. In both of the cenotes we swam in, inlets offered entrances to explore the entire cave system comprising 82 km/51 mi of this geographical wonderland. When combined with the entire Sac Actun system there are over 319.05 km/198.25 mi that make up the largest cave system in the world.

► For Kids: With our barely two year old baby in tow, we didn’t brave the adventure of the caves. It would have required more time for exploration and for little swimmers to be independent, but our older twins would have been pros. This is definitely something we want to head back for. Regardless we peered into the caves and loved exploring the underground lakes exposed to the natural light. It was an exciting experience for everyone!

Dos Ojos offers an exceptional world schooling opportunity in subjects of recreation, geography, topology, topography, landscape, science, geology and the list goes on in a very hands on, exploratory way.

Have you swam at Dos Ojos or any other cenotes in Mexico or otherwise? We’ve officially decided it’s our new favorite thing to do!

► Nap-Time Version: Our family trip to Dos Ojos, the two eyed cenote, just minutes from the ruins of Tulum.

Check out our adventures in Tulum and our review of the Gran Caribe All-Inclusive Family Resort on the hotel strip in Cancun!