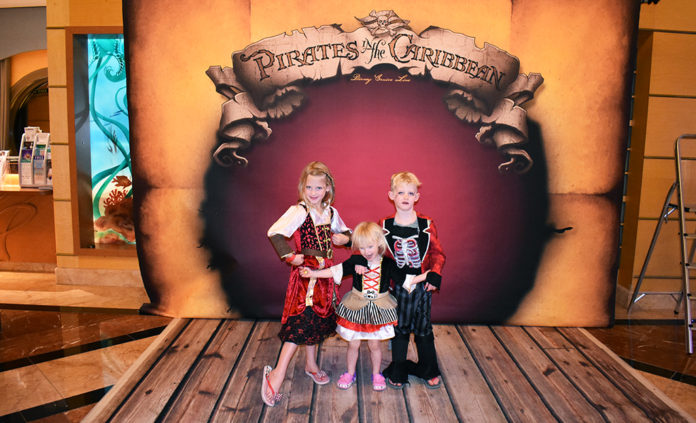 Unlike the deflating and deplorable Frozen Deck Party, Pirate Night on the Disney Magic is a captivating, intriguing and lively evening filled with excitement, unpredictability and even fireworks – this is a Disney cruise after all. I think part of what made this night so special was the fact that coming in, we didn’t know what to expect, so in the event that you want to stop reading here (which we recommend) take this family hint with you: head to the upper rim of the top deck directly after dinner, and don’t delay.

Pirate Night is actually a fun day filled with festivities, most notably in the kids clubs. Jack Sparrow can be found all over the ship, every day of the week, so it’s not particularly special that you’ll find him on pirate night, however, it is especially fun to have your pictures taken with him while you are also posing as a pirate. You will also find Captain Hook, Smee, and the entire crew dressed up in their best pirate garb.

One of the best things you can do to make the most of Pirate Night is pack up your own pirate garb to bring with you, or stop by one of the shops to pay a pretty penny to don your favorite swashbuckling attire. Alternatively you can always spend your life savings by sending your kids To The Pirates League on the ship and they’ll take care of the clothes and the makeup for you. On our first cruise we weren’t prepared to dress up, and felt like we were missing out.

Fortunately, no matter how you prepare all guests are provided with a complimentary pirate bandanna. At dinner, the kids menus will also turn into a pirate hat, so you’ll never be without something. But this is one of the occasions where it’s worth the effort to go all out. Fortunately for us, on our second cruise, we had decided to dress up like pirates for the prior Halloween and all the kids clothes still fit well enough. We had been swimming that afternoon and taken a nap, my makeup was running – so we left it, tangled our hair a bit more with a comb and threw on our Disney bandannas! We fit right in!

The festivities start at dinner with a special Caribbean inspired dinner menu. You want to make sure you arrive on time, especially if you have slow eaters, because as soon as dinner finishes you’ll want to make a mad dash for the top pool decks to stake your claim to the best viewing spot for the after party. Keep in mind there is a pirate show after both dinner services, so if you miss one you can always catch the other one.

Sometime right after dessert, depending on how quickly you eat, your servers will disappear momentarily. When the music starts, you’ll see them all reenter from the kitchen in a long conga line.

They’ll invite everyone to join them while they dance, boot, cajole, and get the party started. The conga line will lead directly out of the restaurant and outside up to the top decks. This is where you’ll want to kick, fight and punch your way to the top balcony deck of the cruise ship. Positioning yourself on either the port or starboard sides will give you the best vantage point.

Early dinner seating will offer a more family friendly party with Captain Hook, while the late dinner seating will feature Jack himself. True to Disney fashion, the party will start with a bit of choreographed elbow jousting. Without giving too much away Minnie will join the party, and then everything goes to boot! Crazy pirates take over the stage. There is a rock and roll song off. Captain Hook crashes into the stage and takes over the reigns, but finally Mickey Mouse will come to save the day! We’ll just tell you a zipline is involved. The night ends with an impressive fireworks show over the water.

We’ve attended this show twice now. Once on the Disney Magic, and once on the Disney Wonder. On the Magic, it was perfect. It was the perfect build-up and length, but on the Wonder the show went a little long and there was a little too much singing and choreography. It felt off.

On the Magic, the night ended with a feast the likes of marauding proportions! Castmembers led everyone exiting the top deck into Cabana’s with everything you’d expect. Seafood, ribs, steak, dessert! It was a fantastical buffet. We definitely missed it on the Wonder.

► For Kids: Little pirates will love the festivities for Pirate Night whether you are in the Caribbean or on the Mediterranean. There is so much excitement and anticipation, it is palpable. The whole crowd is in on the fun, and everyone and everything is so festive. Whether you attend the early or late dinner, the whole family is in for a treat.

Pirate Night has become one of the most anticipated events on Disney cruises, and you can expect to participate regardless of the ship you are on or the length of the ship. Anything we missed or didn’t cover? Do you have any lingering questions? Let us know in the comments!

► Nap-Time Version: A rundown of what to expect and how to prepare for Pirate Night on the Disney cruise ships.

Check out all the fun things you can expect when you take a Disney cruise on board the Disney Magic or the Disney Wonder from your stateroom, to rotational dining, to the magical movies in the Buena Vista Theater.