Home Are We There Yet? Everything you Want in a Tremendous Summer Evening in Seoul 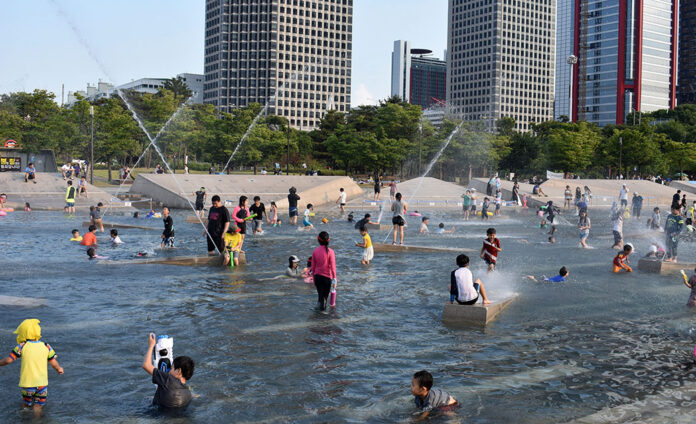 From Namdaemun Market Gate 5 our family took Bus 463 to the Yeouido Bus Stop. It’s the first bus stop once you cross the bridge over the Han River to the south. From this stop it’s just a short walk across the street to the park.

We took a quick jaunt through the goods before deciding on anything. The food trucks line the exterior pathways and the vendors selling assorted wares line the inside. This setup creates two clear aisles through the center of the park. The Han River borders the North side, while a park set up with tables and chairs lines the South. This is the same Han River that separates North from South Korea covered on each side in barbed wire just a little north in the DMZ zone.

At the far end of the thoroughfare is the crown jewel. A two foot deep water feature filled with children splashing, laughing and playing the night away. There were no swim caps, and only a few wet suits. Most children are frolicking in the water in their play clothes, and many babies just wore diapers. A few prepared families came with water clothes and squirt guns, but no one seemed to care about the rules.

Swimming in South Korea with no rules? We were slack jawed.

The water feature allows an ebb and flow of water straight from the river to ease in and out. This keeps the water on the cooler side despite the depth, but also serves as a symbiotic marker of mankind and earth. The feature interweaves the landscape in a beautiful balance with the surroundings bringing to light Korea’s moniker: Land of the Morning Calm.

Naturally, our kids were ready to dive in, long overdue for a afternoon of free water play but we reluctantly forced them to eat first. We tried a little bit of somethings from a whole bunch of trucks.

Gabriel physically couldn’t take another step without getting some Mexican Korean Tacos. In fact, 45 days is the longest I’ve ever seen him go without Mexican food.

Shrimp King was next on the docket. Garlic Cheese Shrimp with sweet chili sauce is a must if you come to Bamdokkaebi Night Market.

There are quite a few steak food trucks, but we opted to try the one next to Shrimp King. It came with cubes of medium rare steak, mushrooms and whole roasted garlic with cabbage.

And just for good measure, we picked up a waffle skewer from Wafflas. It came covered in Nutella and whipped cream and immediately ran off the edge as Pie and Eclair fought over who got to hold it.

And we got some Korean Chinese Food, obviously. It sucked.

The kids said they were full enough to swim at this point so we took them to the crown jewel. We asked them to wade in the water, and keep the water below their knees. We knew it was futile.

They knew it was futile.

They stayed dry for less than a minute.

Molasses even begged to go in the water. We didn’t have a swim diaper because a) we had no idea there would be an awesome water play area feature used for family fun, and b) swim diapers are sold in packs of three in Korea! Three!

While the kids were not staying dry in the water, Gabriel went and got a different kind of Korean Chinese Food because we were so disappointed by the first round. This food truck was much better, but still not up to par. It’s like it was pre-fried and then baked to keep it warm.

Family Hint: Get Chinese food in Korea from Chinatown not at Bamdokkaebi Night Market.

When the sun went down, the jets came on. Every boy in the park stood on a platform in unison and pretended like it was their own personal achievement. The water from the river started to seep back in and with the sun going down, it began to get a little chilly soaking wet, so the kids decided they were done. We went to the bathrooms to wring out their clothes and in the warm summer night air they were dry within 30 minutes.

But, they wanted more food so we went down to the platform seating that leads down to the river’s edge and sat high above the stage to listen to the live music. The kids danced. Gabriel got more steak. Man, we like to eat.

As the night wore on it got progressively busier and busier. Our wait for food was five minutes or less, but come 8p, waiting times increased to 30 minutes or more with lines weaving every which way. Not sure how it gets later and later, but if you are headed to Bamdokkaebi Night Market with kids, we recommend heading there early.

Even though our clothes dried quickly, we’d bring swimsuits and a pair of shorts to wear in the water for the girls in the future. Western bathing suits aren’t standard here, and everyone will likely be more comfortable. We’d also bring towels and extra clothes to make everything a little easier.

We left just after 9p and took the subway home. It was a standard three transfer two hour ride home and packed. We like to sit in the back of the cable car where we can tuck away the stroller from the doors and the main compartment. Halfway back to Songdo, Widmore came over to me and said someone just gave him some money for being cute. The older generation of people here in Korea always give the children candy and coins everywhere we go. They exclaim, “so cute!” It’s endearing.

I asked him how much money he got. He pulled out a yellow piece of paper with Shin Saimdang, a 16th Century Korean artist and writer, and the first woman featured on money in Korea.

It was ₩50,000! That’s nearly $50! At first I was like, I don’t think that’s real, but sure enough it was. Then I was like, no, you can’t have that. He said the man laughed, put it on the stroller in front of him where he could grab it and walked away. He was insistent that the man wanted him to have it. If there is one thing Widmore understands, it’s the value of money and he didn’t want to give up ₩50,000!

Interesting side note, Shin Saimdang is the mother of the Yulgok, the person featured on the 5,000 won note.

Gabriel said he didn’t realize how much money it was or he would have made him give it back. By this time it was too late, the man had left. Mr. ₩50,000 was sloshed, laughing hysterically and all smiles. I doubt he’ll feel that way in the morning especially after looking through his wallet.

Then we had to have a serious talk with the kids about how nothing in life is free and if someone gives you ₩50,000 they typically want something in return. Worldschooling lesson: Don’t accept money or candy from strangers. Unless you are in Korea. Then apparently it’s safe.