Home Are We There Yet? Everything You Need to Know about Eating Bugs in Korea 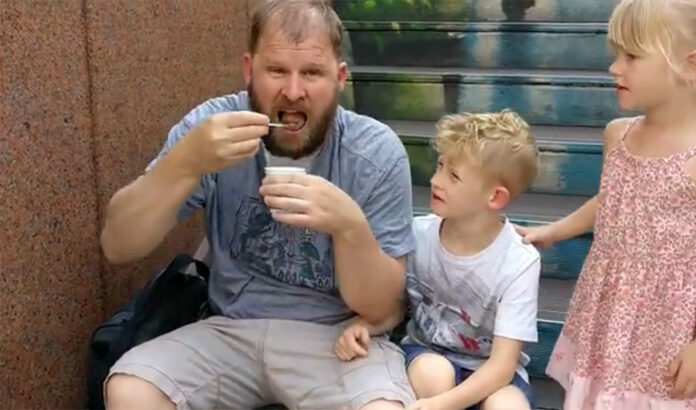 Gabriel has been promising to eat the Korean delicacy silk pupae snack, also known as beondegi, since we first arrived in South Korea. Today, was that day!

In fact, not only did Gabriel eat bugs in South Korea, but each one of our kids were up for the challenge as well.

We are going to share with you why you would want to eat bugs in South Korea, how much they cost, and how they taste. This is everything you need to know about eating Beondegi in South Korea.

While the average person in Korea might not eat beondegi nightly for dinner, this ritual has a 4,000 year history in this culture.

Dating back to the 1600’s silkworms were treated as sacred creatures who provided material for clothing, medicine, vitality and strength. In fact, beondegi has many nutritional properties not the least of which is protecting against alzheimer’s disease.

Because the pupae are high in fiber, they are considered a great snack for children. Today, many people still consume the beondegi with nostalgic reverence.

Where Can you Get Beondegi?

Nearly all the outdoor markets in South Korea have at least one vendor selling a vat full of stinky bugs.

If you want it, you won’t have any trouble finding beondegi.

You can even find it at Costco!

How Much Does a Cup of Beondegi Cost?

Everyone ended up eating bugs in South Korea but me.

Widmore was the most excited. He was raring to go and couldn’t wait to show off how cool he is doing everything that Dad can do.

Pie was reluctant, and washed hers down with water. I don’t know if that counts as eating bugs in South Korea, but it’s more than I could do.

Eclair was a trooper and took a spoonful and even chewed it up. She protested and said gross, ew, the whole time she was eating the bugs in South Korea, but I’ve seen the girl put up more of a fight over broccoli.

And no one made her do this, either. It was all her choice to eat the beondegi.

How Do They Taste?

Everyone described the taste as fairly bland, but gritty.

Gabriel likened the texture to a blueberry. When you bit into them they pop open and oozed liquid onto your tongue. A liquid with a sandpaper texture.

Fortunately, they didn’t taste nearly as bad as they smelled. So they tell me.

Proof in the Pudding

It wasn’t so much that I was too afraid to eat beondegi, it’s that I knew my limitations. Even without eating it, I spent the next hour trying not to throw up.

The smell was horrendous and that, combined with the mental image of creepy crawlies in my mouth, was too much for my sensitive palate.

Despite what Gabriel told you in the video he did not finish the entire serving, but placed it in the cup holder of our stroller and then covered it with baby wipes.

The smell and the visuals continued to follow us around, wafting through my nostrils.

To make matters worse, we ended up down a backside enclosed corridor where every fish restaurant at Namdaemun Market was preparing their dishes and depositing their waste down the outside drains.

Normally, I like fish, but today the stench was repulsive. I thought I was done for, but we managed to escape and immediately found some dumplings to drown out my previous nightmares.

By a stroke a luck, we just happened to turn the corner and found the hotteok that everyone has been telling us about. The street food dessert that made us fall in love with Korea all over again.

I managed to not throw up, and get a delicious treat!

Hotteok is a fried pancake filled with nuts and honey. Typically it is only sold in the winter, but it is amazing and should not be restricted from the masses during warm spells.

It’s so much better than eating bugs.

► For Kids: Our children faced up to this adventure and tackled it as part of experiencing the Korean culture and earned their worldschooling degrees with high marks.

► What We Learned: Today we learned how different cultures around the world utilize their natural resources. Throughout much of history, Korea was a very poor culture. They learned to adapt and make due with what they had. This was a great lesson for our family.

Would you, could you, eat beondegi? Check out this list of 25 other iconic Korean foods you should try!

► Nap-Time Version: How and why everyone in the Diapers On A Plane family (except Mom) ate bugs for lunch at Namdaemun Market in Seoul, South Korea.

Check out our other family adventures traveling through South Korea this summer, like visiting North Korea on a Korea DMZ tour, being baptized in a foreign land, and finding Bingsu: Korea’s Best Kept Secret!