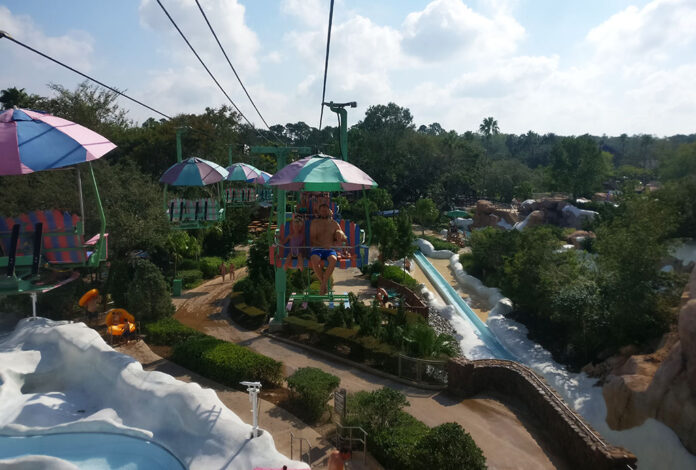 After seven annual family trips to play at Walt Disney World, we finally made our way to the Disney Water Parks! It was something we’d always wanted to do, but couldn’t quite squeeze in amidst all the theme park fun we were having. The parks opened at 10 am and closed at 5 pm. We figured we could start out at Typhoon Lagoon, spend three hours here, eat lunch and travel to Blizzard Beach for the remaining three. Except, it’s never that easy, is it?

When we got to the bus stop there was already a bus to Blizzard Beach, so we decided it would save time to simply hop on that one. First it stopped at Animal Kingdom. We had to get off and walk to the opposite side of the bus terminal and get a different bus to Blizzard Beach. When we got off at Blizzard Beach we were told we had to first take a bus to another resort, and then get a bus to Disney Springs, and finally after jumping across the circus to get through the last hoop, we could catch a bus to Typhoon Lagoon.

I have to say, the park hopper option at Walt Disney World is infuriating. It’s a huge waste of money, and one of the top 9 things I hate about Walt Disney World. It’s built into the water park ticket, so though you aren’t actually spending any extra money, there is no conceivable way to visit both water parks in one day. In fact, at no Walt Disney theme park can you actually take a bus to another park to utilize the park hopper. If you are going to park hop, add an extra 1-2 hours of travel time to your day because you have to factor in a potential 20 minute wait for two different buses each, plus the 20 minute bus ride, and that doesn’t factor in any other obstacles along the way.

We were 15 minutes late due to the transfer, and about an hour into our day we decided the best thing to do would be to just plan another trip to Typhoon Lagoon. Though it was the only decision, it was also the best. We barely had enough time to enjoy everything Blizzard Beach had to offer. We hit the slopes, we played in the sand, and raced each other down the toboggan slides at this melted snow resort that couldn’t stand the heat of the Florida sun.

Prices are based on both the season and the age range. September through May ticket prices are $5 less, and $6 less for kids under 10 years of age.

The first thing we did was take the ski lift up to the Green Slopes. Guests must be 32” to ride the ski lift. It offers an alternative to the million and a half stairs to walk up to the summit, and gives you easy access to all the water slides. It also offers a beautiful view of Blizzard Beach. You can see the wave pool, and ski patrol – our favorite area in the park.

At the top of the ski lift we found Mt Gushmore where Teamboat Springs, Slusher Gusher and Summit Plummet are located. Teamboat Springs is a two minute, super fast, twisty and turny, inner tube family ride. We rode this three times as a family and loved it even more every time.


Slusher Gusher and Summit Plummet both have a 48” height requirement. There are three rides total that little ones aren’t able to ride on. That makes for a difficult time no matter what, but especially when you are trying to rush your way through the park in order to park hop.

Summit Plummet is a vertical drop straight down where you can gain speeds up to 60 miles an hour traveling the height of a 12 story building. From the outside it looks as if the slide goes off an embankment, but in reality the opening to fly downwards is hidden behind the slope. This would definitely need a higher height requirement if the slope were a reality. This is the park’s signature ride. This ride offers whiplash on your butt – because you are traveling so fast the water slaps you around painfully, but unquestionably worth it even though I’ve had to check Gabriel’s rear end for bruises no less than 3 times in 24 hours.

Next up are the Purple Slopes at Blizzard Beach. This area has two sled rides, Snow Stormers and Toboggan Races, plus an inner tube ride, Double Dipper. Double Dipper is the third slide with a height requirement. This ride doesn’t offer a huge payout for the minimum 30 minute wait. It is a curved dip slide that is finished in 6.4 seconds. Two riders race each other to the finish line at the end of the sled. It’s super fast, and thrilling, and I actually fell off my inner tube – it’s just crazy short.

Snow stormers was our favorite ride on the Purple Slopes. For this ride, you have a purple two handled long thin mat that you lay on face forward as you speed around loops, corners and down the hill. Our little baby begged to go on this ride over and over and over again. I went down this sled first, and was very concerned about her holding on down the careening slopes, but she popped out fully intact and a smile spread from ear to ear.


The Toboggan rides utilize the same purple mat. This ride was very similar to a potato sack slide. Soaring down the 250 foot slide against 8 other riders, it’s a race to the finish. Our little one loved this slide as well and couldn’t get enough. All day long she explained to us how she had to lay forward like this, and hold on tight like this, and go fast fast fast like this. It was such a treat to see her enjoy herself so much!

The Red Slopes were closed during our visit.

We had lunch at LottaWatta Lodge which offered a full gamut of terrible theme park greasy food options. Click above to check out our full review.

We let the food settle in our tummies after lunch by taking a leisurely trip down the 1 mile loop on the lazy river. Along this route there is a dark cave with freezing icebergs gushing over you, a booger house with a sick snowman inside shooting his boogers out the chimney, and complimentary rafts floating free throughout the river. There are seven exits and entrances located strategically throughout the river, making it a great choice for transportation around the 66 acre Blizzard Beach.

The wave pool was fun enough, but not quite as impressive as I’ve seen other places. The water depth never exceeds 4 feet, so you are constantly getting pushed down to the ground on the rough cement bottom. If you don’t stay in the center or on an inner tube, you’ll be scraping your legs, your feet, and your bottom on the pool floor. Inside an inner tube it can be pretty fun getting thrashed around by the waves, but you’ll find yourself pushed towards a rock wall by the force of the waves, at which point the lifeguard will yell at you to move away. It’s one of the low parts of the park.

The wave pool is not as bad as Tykes Peak. This area is intended for children under 48”, but I’d argue it’s best for children under 2. It’s extremely tame with several miniature slides, an inner tube slide, and areas for the kids to play on their own. There is also a lot of sandy areas for the children to play and build here. Our older kids, still under 4 feet tall, had a difficult time maneuvering down the slides as there isn’t enough water to propel them down. There is also a splash pad area in this location too.

This was probably our favorite area at Blizzard Beach along with Purple Slopes. This area has a zip line, inner tube slides, iceberg crossing and other various small slides that runoff into deeper water. This area is tons of fun. There is no height requirement for any of the attractions – in fact, it’s just the opposite. Kids have to be under a certain age or height to participate.

Even our little 2 year old was able to play on the zipline. She was nuts over it. Her first time down she went without a life jacket. The height of the zipline made her plunge fairly deep into the water, which was a bit startling for her, and for the lifeguard. We’ve discovered over the past 6 1/2 years that little swimmers make lifeguards very nervous. He jumped into the water after her., but she came up before he got to her. He was just about to say she couldn’t do it again, when he heard her exclaim “Let’s go again!” He said ok, but as long as she wore a life jacket. All our children loved doing the zip line (also called the Tbar).

The last fun attraction at Blizzard Beach was the iceberg crossing. Large floating icebergs, tethered to the bottom of the pool provided a path from one side of the pool to another. Because they were constantly moving they were a fun challenge for all our children to attempt to cross, especially the baby. She has to do a lot of waiting around at the theme parks so she loved having a day where she could participate in just about everything.

► For Kids: Blizzard Beach is a fun water park where kids of all ages can be adventurous! This fun water park offers the option of playing in either the sand or the water. Though 3 rides in the park are 48″ and above, there is plenty to do elsewhere. The theme will be lost on most kids, but it’s more of a sideshow. There are family attractions throughout the park, and fun can be enjoyed all together.

We all loved spending the day at this water park. We arrived at opening and stayed until they kicked us out. Our kids immediately asked if we could come and spend the day here again! We might have to consider buying annual passes!

► Nap-Time Version: Blizzard Beach is one of the two water parks at Walt Disney World. It’s based off a ski resort that failed in Florida’s hot weather, and transformed into a water park. This park offers thrill rides for all ages.

Check out all the adventures we’ve enjoyed at Walt Disney World after visiting annually for nearly a decade!