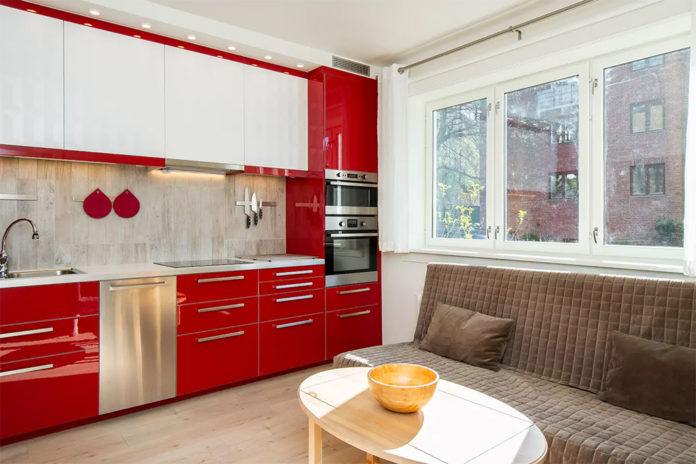 Across town, in the opposite direction of the graffiti and promiscuous pictures was where we found our home for Christmas. This darling airbnb, with red cupboards in the kitchen and four single beds laying side by side each other in the bedroom, was perfect for our celebrations. Though we longed to be in Tromsø, we were finally in a home that we could feel at ease and wait for Santa to arrive. For the same price as Martin’s dormitory, we had a separate bedroom, extra beds, and though we weren’t on the opposite end of a converted silo there was a playground in the courtyard. This is the airbnb that saved Christmas.

This is the last airbnb we will ever stay in. After Part 2 of our Family Christmas Saga in Norway where we booked a grossly misrepresented airbnb that wasn’t fit for a family and reeked of cigarette smoke, dirty shoes and incense, and airbnb told us too bad, so sad, we officially have written them off. It’s not a risk we’re willing to take, and as a family who is notorious for taking risks, that should tell you a lot about the circumstances we experienced. We found this airbnb while we were still under the impression that airbnb was a credible brand; before discovering airbnb would exhibit their true identity of being crooks and thieves.

*Update: Airbnb reached out a few days ago and offered a refund just $40 shy of the full amount we paid for this creepy apartment. Though we are satisfied with the outcome, it seems like it shouldn’t have been quite so hard for them to do the right thing in the first place.

This perfectly quaint airbnb is located in the middle of a central street in town, bordering an adorable intersection where every single car stopped at the crosswalk for our family to cross the street. While we were under the impression that everything in Norway closed for Christmas, we found this to be slightly inaccurate. We had both a 7/11 and a Narvesen down the street that were open during the day, while the 7/11 was open 24 hours. Though we couldn’t make a meal out of cough drops and chips, they did have a selection of fresh personal pizzas, sandwiches, muffins and cookies along with fresh organic juices. Around the corner we also found a little fresh produce market that sold all the fresh fruit and vegetables we desired, along with tin foil that came in handy when we had to makeshift a cookie sheet to bake Santa’s cookies. Down the street a little ways was a Joker, Oslo’s predominant grocery store chain. Though we had completed our shopping earlier, Miss Pie ended up developing a wicked cough on Christmas Eve and we were able to give her some relief at the combination of these two stores.

The second night we ended up hiring an Uber to take us down to a 24 hour pharmacy, also open on Christmas morning. Unfortunately, Gabriel had neglected to take his ID with him, instead grabbing my wallet for payment and they wouldn’t sell him the cough syrup. Well, they accepted his money but wouldn’t give him the syrup without ID. He returned, swapped passengers with me in the Uber and I headed back to the Apotek1 where they finally let me take the cough syrup home after making a copy of my picture ID. The Uber driver actually had no idea what a drugstore was when I tried to explain to him what was going on at 3a on Christmas morning.

The home itself was very nice. The kitchen had been remodeled recently, though it was noticeably low on mixing bowls and platters. We ended up using one wooden bowl for everything from the potatoes to cookie batter. It was the only thing that was lacking. It was clean and it didn’t smell, which wasn’t the only thing we were hoping for, but is what we were concerned about at the time. We loved the bright colors in the kitchen, and the warm pillows and blankets in the bedroom. We loved seeing the lights of the neighbors through the windows and seeing the snow gently falling in anticipation of Santa’s arrival. We loved being able to spread out and relax after a long few days of traveling. It felt like a place we weren’t intruding upon as an unwelcome guest.

In the end, it was highly uneventful, which made it perfect. We had what we needed in the home, or we were able to find it within a five minute walk down the street. It was warm, had enough beds, a kitchen table and a playground outside. The only thing missing was a TV, though we enjoyed listening to Christmas music and talking instead.

► For Kids: A great, safe location with warm bedding, and a separate bedroom. We were able to observe all our Christmas traditions here and the kids loved pushing the four twins beds together to form a giant smooshed together bed.

Have you ever had to find a place to stay last minute in a foreign country? It’s not as hard as you might think, until you make a terrible mistake and get screwed over. Read Part 2 of our Christmas Saga.

► Nap-Time Version: The airbnb that saved our family Christmas!

Read on to hear about how we celebrated Christmas in Olso, Norway in our last minute airbnb, after fleeing a disgusting airbnb rental not fit for a family and made the best of our Christmas!