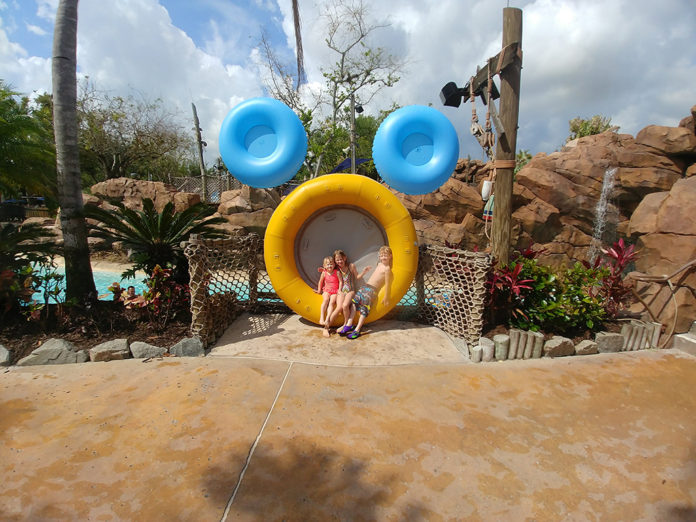 Disney offers two themed water parks in Orlando, Florida. Typhoon Lagoon and Blizzard Beach. Typhoon Lagoon is the wreckage left as a result of a typhoon that swept through Florida dislodging and disarming boats, trees, slides, fishing gear, surfboards and the like leaving them where Mother Nature thought best. We’ll just save you the trouble and tell you right now that Blizzard Beach is definitely the better option out of the two. If only Disney would take the wave pool from Typhoon Lagoon and replace it with the pathetic one at Blizzard Beach, everything would have landed where it should have post storm.

This park opened 28 years ago, and the idea for some of the slides are just as bad now as they were then. In fact the only areas of the park that we enjoyed was Miss Adventure Falls, Crush ‘n’ Gusher and the immense and intense wave pool. That didn’t quite fill up the whole day and after a few short hours in we were ready to call it. That’s pretty much all you need to know.

Both parks have 12 attractions each, including a wave pool, a lazy river and an under 48” kids area. That is where the similarities end. At Blizzard Beach there are three water coasters that have a height requirement of 48”, meaning that most of the rides can be enjoyed by the entire family together. At Typhoon Lagoon there are two attractions with height restrictions, but both of them have three slides a piece which make a total of six attractions that little ones can’t ride. Unfortunately, since most of the other slides aren’t even fun, this is a major buzzkill.

If you think you can usurp the height restriction by wearing water shoes, think again. The slide operators will make you take off your shoes in order to be measured! Even a quarter inch will prevent you from enjoying the best areas of the park while you look on gloomily as your twin sister goes ahead.

The major differences are in the quality of the slides themselves.

Prices are based on both the season and the age range. September through May ticket prices are $5 less, and $6 less for kids under 10 years of age.

This is the grandest, and best attraction that Typhoon Lagoon has to offer. This immense and massive wave pool stretches to the far reaches of the park and produces six foot waves that crush everyone swimming in the pool under their wake.

The wave pool provides endless fun. Being pummeled by the giant waves, and sucked under their force, is actually quite thrilling. The entrance is sloped to mimic a true beach, and continues to get deeper and deeper the farther into the water you go. Eventually, you’ll reach a red dividing line where you cannot cross with a life jacket. This is the sweet spot. It’s where the waves crest and you can swim with them back to shore or allow them to peak over you and crash into everyone else awaiting the same fate.


Life jackets are provided free of charge for all guests. We decided to put all three of our children, who are excellent swimmers, in life jackets for the wave pool. It’s absurdly fun, and yet extremely tiring to get hit by genuinely massive waves every 90 seconds.

Alternating between the awesome six foot surf waves, is a half hour of continuous pulsating waves. These are miserable, and they go on far too long. They really should keep them to a minimum of 10 minutes, if that.

The name, Typhoon Lagoon Surf Pool is named such for a reason. It is a true surf pool and you can take lessons here for an additional cost.

These trio of slides were awesome! There is a 48” height requirement, even though all three slides are enclosed with full netting. Two out of the three slides are double occupancy tube slides, and the last slide is a single rider tube slide.

These slides have fun names based on their fruit counterparts, as the slide itself is sponsored by Chiquita: Pineapple Plunger, Coconut Crusher and Banana Blaster.

Each 400 foot slide offers twists, turns, drops, lifts, and bounces you around like a bouncy ball. The effect is tons of fun, and we loved riding these water coasters over and over and comparing which one was better than the last.

The area that Crush ‘n’ Gusher resides used to house the Shark Reef. A salt water habitat where guests could snorkel with stingrays, sharks and other fish included with the price of admission. Obviously that attraction is long gone, but at least they didn’t replace it with another speed bump slide.

These slides were another fun area of the park, that fortunately didn’t have a height requirement and all of our kids could participate in. Like many of the attractions at Typhoon Lagoon, there are three slides that make up the Storm Slides. They also have super fun names including the Stern Burner, Jib Jabber and Rudder Buster. They are smooth, not too short, and end with a waterfall splash into a big pool.

Miss Adventure Falls is like the Pirates of the Caribbean ride in a water park version. Fortunately this slide is right next to Crush ‘n’ Gusher and so the two of our three kids that couldn’t ride those trio of slides had fun riding this slide repetitively.


A maximum of four guests can occupy your giant tube raft that careens through a series of twists and turns with a talking parrot, treasure to be found, and Captain Mary Oceaneer.

Mayday Falls is the very definition of sheer misery. First you have to carry your own inner tube up several flights of stairs – double or triple that if you are visiting with kids. The stairwells aren’t actually big enough to carry one tube, let alone two or three so you are constantly adjusting and trying to push the raft to one side to get to the entrance.

The payoff of the misery of accomplishing that is the agony of rafting over speed bumps for the duration of the slide.

Keelhaul Falls is the exact same iteration as Mayday Falls with a different name and a different set of stairs to climb.

The under 48” area of the park, aka the baby area, is basically only for the babies that didn’t pay to enter. We can’t recommend it for kids that are mobile and have any interest in doing anything beyond sitting. There is one notable tube slide that our three year old enjoyed, but only for one or two rides.

There is no big kids area for daredevils like the Ski Patrol Training Camp at Blizzard Beach. There are the Bay Slides, intended for children under 60”, which are three basic slides that are scaled down versions of the other slides in the park. Even our three year old preferred the real versions.


As a whole, Typhoon Lagoon feels quite a bit smaller than Blizzard Beach. To prove this, Castaway Creek is a whole ⅓ smaller than Disney’s other water park, Blizzard Beaches lazy river! Inner tubes and floaties are provided with admission. There are several entrances and exits, and it’s a great way to maneuver the park and transport yourself between the different areas regardless of size.

We ate lunch here at Typhoon Tilly’s. We dined on a mix of fried fish, bbq pork sandwiches and a shrimp po boy. Because it was April it was still off season, and so it was the only food option to choose from. It was about what you’d expect.

This is one of two attractions at the park that have a height restriction of 48”. Humunga Kowabunga has three slides a piece that are virtually indistinguishable. They are short, drop you from a 50 foot height, and water slaps your face, back and legs sharply the entire time.

► For Kids: Two out of our three kids couldn’t enjoy Crush ‘n’ Gusher so that left Miss Adventure Falls, the Typhoon Lagoon Surf Pool and the Storm Slides for us to play together as a family and enjoy it. We tested every single slide and attraction at Typhoon Lagoon, and that was all we were left with.

We definitely want to branch out from Disney during our next family trip to Orlando and try out all the other water parks that Florida has to offer! Do you have a favorite?

► Nap-Time Version: When it comes to deciding between Disney Florida Water Parks Typhoon Lagoon and Blizzard Beach, our family casts our vote for Blizzard Beach!

Check out our full review of Blizzard Beach and everything else we love to do at Walt Disney World as a family! Don’t miss our take on the Disney Dining Plan, Mickey’s Not So Scary Halloween Party and our favorite restaurants!