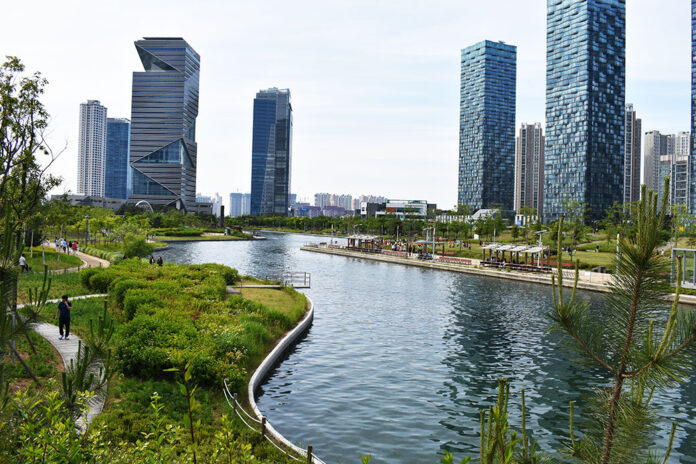 During our adventure to Costco in South Korea on Day 2 we exited the subway station at Central Park Songdo and immediately our eyes were fixed on a massive art sculpture set inside a shallow man-made water basin. You can’t miss it. It’s comprised of three appendages sitting in the middle of the water and resembling something of three distinct bowls. There is a walkway from the sidewalk to each of the structures, and glass doors that enter into them to reflect an interior elevator. Really, what they look like are giant alien designs and I fully expected to be abducted. Regrettably, the doors were locked so there would be no abductions on this day. However, we knew we had to come back to this location sooner, rather than later, to discover the secret alien society hidden within the city of Incheon, South Korea.

Well, today is that day, my friends.

Today our family explored Central Park Songdo. It’s named Central Park because it’s fashioned after New York City’s Central Park; except ⅛ the size. Central Park Songdo is 101 acres as opposed to New York’s 840 acres. Today we decided to walk to the park after learning it’s only about a mile from our apartment (maps tells us it’s 19 minutes by transit, with 14 minutes of walking). It takes so long to go anywhere here.

This park is absolutely beautiful! It is filled with various types of trees and flowers, and everything is in bloom.There is a woodland mountain garden, a long meadow, a terrace garden and a great lawn.

There is a communal foot spa.

Our family zealously looked on the water and watched the other families playing in kayaks, tubes, boats, jet-skis, paddle boats and every other type of water vehicle.

We played with the deer at Deer Farm, and subconsciously scrunched up our noses like bunnies exclaiming oohs and aahs at the adorable shenanigans we witnessed on Rabbit Island.

There were families camping, or at least day camping with tents playing board games and relaxing at Central Park Songdo. 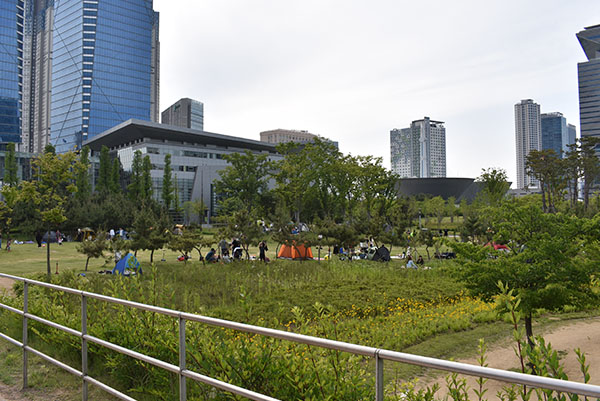 Of course, there is a children’s playground.

We wanted to explore the maze, but our eyes were on the prize: the secret alien hideout that we trekked over a mile in order to investigate at Central Park Songdo.

Turns out the alien structures at Central Park Songdo are a multi-complex culture and arts center. They were built to symbolize a city in harmony with the sky, ocean, and earth; so not exactly what we were hoping for.

The structure itself is very unique and compelling, clearly. We wanted to come back and see what else this place had in store, but the day we came to visit it just had really bad art installations.

It was fascinating to see what the buildings looked like inside though. I’m sure there are various activities held inside these curved surfaces that provide something worthwhile. Just, not today.

Also near Central Park Songdo is a Lotte Mart, which naturally, we had to check out because we are a family obsessed with the cultural wares you can find in foreign stores.

All I know is Lotte Mart has officially been designated as the Diapers On A Plane grocery store. We finally purchased a watermelon at ₩ 9,000 and this grocery store has a huge organic section! The prices for some items are egregious, like ₩ 3,500 for a bundle of organic bananas!!! But otherwise prices are fair and much lower than any other grocer we’ve been to thus far; and we’ve been to six now by our count.

Also, why do you have all this swimming stuff if there are no pools here?

Our family loves Lotte Mart because they have a Korean version of fitted sheets. It’s a full sheet with a strap for the corners, and it’ll do just fine.

We stopped at Banes Taco for dinner on the way home. If there is one thing to avoid in Korea, it’s…

I just do not know how you mess up Mexican food that bad.

We continue to be bombarded by people that are quite taken with Molasses. I can’t blame them, she is growing ever more darling and talkative by the day. This city is huge, but it helps to walk more and discover our bearings visually, or take the bus, as opposed to being stuck underground in the subway and emerging someplace new.

We also learned how to count to 10 in Korean!