Home Where Are We Going? Asia How to Find the Most Epic Ninja Restaurant in Tokyo!

Themed dinner restaurants in Tokyo are easy to spot.

Pictures of weird and kooky paraphernalia dancing wildly around in the windows with cryptic signage and someone dressed up in full themed regalia dancing outside the entrance is almost guaranteed. They are everywhere in Tokyo and come in every theme, category and style.

The very best of them all is the Ninja Restaurant in Tokyo: Ninja Akasaka.

How to Find the Most Epic
Ninja Restaurant in Tokyo!
[MUST DO]

A themed dinner restaurant is something that every visitor needs to experience when they come to Japan. It’s unique to the culture, and not to mention, a whole lot of fun. This is your guide on how to find the Most Epic Ninja Restaurant in Tokyo!

Why a Ninja Restaurant?

On top of that, our children had just started Kenpo Karate back home, so we knew they would love it!

There are a lot of different types of themed restaurants! Scroll to the bottom to find out just how many.

They were a full week out before they had an opening in their reservations, and only one open slot at that.

Family Tip: Don’t wait until the last minute to schedule a restaurant. Plan ahead!

Ninja Akasaka is located in the Akasaka Tokyu Plaza.

Akasaka is an upscale hotel in the Chioyda prefecture of Tokyo and the plaza is the attached shopping center.

Fortunately we got there very early because Google sent us walking around in circles for a half hour. We finally figured it out five minutes before our appointment at 5:00 pm.

The ridiculous part was that it was directly outside the exit of the JR Ogikubo Train station, the very station we exited after arriving.

Look for the Obvious Ninja Door

The door is very ninja-esque. It blends into the wall of the exterior with no markings, signs or even a doorknob. We saw a group of people standing outside, and they indicated it was indeed our themed dinner!

A Ninja dressed in full garb with only their eyes exposed ushered us into the restaurant.

We were led through dark tunnels, over bridges, under fire and finally found our way to the secluded and secret Ninja hideout.

There are several trap doors that can only be opened with Ninja magic, which generally speaking involves some hand motions and saying the words: “ninja magic”.

We had our own dining room to ourselves with the table at ground level and a hole in the floor beneath it for our legs. We sat on pillows and it was quite comfortable.

The menu, delivered on a scroll, offers several a la carte items and several prix fixe menu selections. We opted for the prix fixe menu because it came recommended, and we had no idea what most of the items on the menu were except for the sushi.

We chose the same for our children.

The prix fixe menu comes with a selection of 11 items.

The children’s menu was very similar. 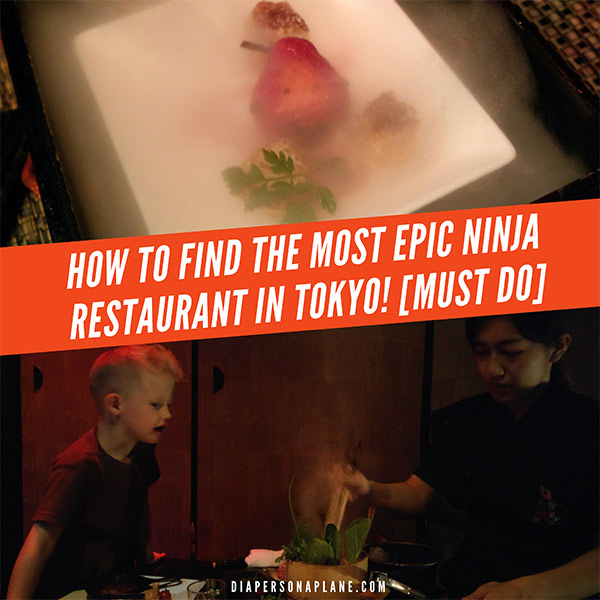 Our server brought in all the selections one by one. She explained each item and its significance.

Our soup was cooked in front of us with 500° hot rocks she dipped into the mixing bowl with tongs, as she cut the greens with scissors. It is very engaging to watch!

The sushi is brought out on a platter for each person, which made the kids feel very important because we are stingy and usually don’t share that much with them.

At the end of the meal a different Ninja came into our dining room and gave us a private magic show.

This was no Gob Bluth show.


It was super impressive.

The final trick he did was had one of our children write her name, in her hand writing, on a card she chose from a deck of cards. He put the card back into the deck and shuffled it around.

The next thing he did was pull the card out of a pocket inside a sealed envelope that was tucked inside his suit! We were all shocked and are still trying to figure it out! Plus, we got to keep the card as a souvenir.

Our exit was through a few more trap doors and over another bridge until we reached a huge portcullis that was on fire! With a little more Ninja magic, the fire was put out, and we were able to exit unscathed.

Our Ninja Restaurant in Tokyo dinner was about 2 hours long, and the cost was pretty steep.

Our meal came to approximately $300 USD. This is standard fare for a themed dinner, and Japan is not a cheap city to visit.

In exchange, we received a ton of food, great entertainment and service, tokens to take home and great memories we’ll never forget.

We all thought it was really special, definitely unique and categorically Japanese.

There are a few restrictions when it comes to children dining in this restaurant.

During weekdays children are only allowed to visit between 5:00 pm – 7:00 pm. Infants are never allowed. Also, you may not bring more than 5 children, unless the same number of adults will also be dining.

► For Kids: This Ninja Restaurant in Tokyo is an epic dinner experience for the whole family! The food offers a taste of Japan in a kid friendly presentation, and it’s a treat for them to see their soup cooked with hot rocks, a mystery dessert hidden in a box they get to unwrap and a magic show to complete the evening.

Have you done a themed dinner in Japan? We considered the UFO experience or the Sumo themed diner, but in the end the Ninja Restaurant in Tokyo won out.

Other Themed Restaurants in Tokyo

Plus a lot of not so family friendly options as well.

► Nap-Time Version: Expensive, but worth it. This Ninja Restaurant in Tokyo is a treat for the whole family with excellent theming throughout the meal offering Japanese culture, history, food, and fun.

Read about more of our adventures in Tokyo, and all of Japan.