Home USA Florida Eating Our Way through 46 Countries in 1 Day | Our Family’s...

Our annual vacation to Walt Disney World this year coincided with the International Food and Wine Festival in Epcot. In addition to the 11 countries represented in the World Showcase, 35 additional countries have food kiosks scattered throughout the park with sample food and wine choices to indulge. This was such a treat, literally!

We already love Epcot and the flavors that are encased here, but to add another 35 choices on top of it! That is heaven on earth. When we arrived, we actually had no idea what we were in for, or what the International Food and Wine Festival even was. We started our day with a Fastpass+ to see Mickey, Goofy and Minnie and then we made our way to the World Showcase. We were scurrying to the Germany Pavillion so we could get some baked Macaroni and Cheese at Sommerfest. Everyone was starving because we hadn’t yet had breakfast. As it goes with three little ones, we thought we’d get out of the hotel faster, fill our tummies faster, and take less time to do just about everything. Why we still think that after six years, makes absolutely no sense.

After squelching the children’s hangry pains in Germany, we wanted to head to Japan to finally try out Katsura Grill. Just past Germany we noticed the Spain kiosk, with a menu that featured a Spanish Olive Oil cake with lemon curd. I was enticed, but we didn’t want to ruin our appetite before we got to Japan. We’d missed Katsura Grill the past three years, and were determined to make it there. Of all the years we make this goal, this was the worst year to actually stick to it. We passed up the Spain kiosk and then the Italy kiosk, the US kiosk (which okay seriously we didn’t mind missing this one) and finally got to Katsura Grill where we feasted on the equivalent of crap grocery store sushi; a total #stinkydiaper experience. We were left completely unsatisfied.

Outside Katsura Grill was the Japan food kiosk featuring a Salmon BLT sushi roll. We redeemed one of our snack credits on this $8 delicacy, and it was all over. After one bite we wanted to try everything! And we did! We savored Pork Belly, German Waffles, Filet Mignon, Spicy Hummus Fries, Venison Loin, Irish Sausages, Chocolate Torte, and Caribbean Puff Pastry to name a few. We had 23 snack credits left on our Disney Dining Plan when we arrived. We ended up with 8 by the time the day was over.

As we’ve said before, we love to eat our way through Walt Disney World. The International Food and Wine Festival was the proverbial icing on the cake. By the time we made our way through Canada, the kids were begging to go on rides, so we took a break and hit up Soarin’, the Nemo ride, and Spaceship Earth. We then rounded out the day with Elsa and Anna before dinner. We are sad to say we weren’t able to sample any more of the kiosks we missed. We didn’t know how much we actually craved until we surveyed the map and the information booklets when we got back to the hotel. Writing this, all I can think about is how much we missed and how desperately I want to go back. I never did get to try that Spanish Olive Oil Cake.

You may notice there is no mention of the wine aspect of the International Food and Wine festival in this post. We do not drink alcohol, so we focused on the food portion. The food is the best part anyway!

In addition to the 35 additional kiosks scattered throughout Epcot, you can also taste specially designed menus and dining events at specific locations throughout Walt Disney World. Celebrity Chefs host brunch and meet and greets, and 197 chefs in total, from Disney chefs to guest chefs, present culinary demonstrations and cook for festival events. 5 episodes of some TV show called “The Chew” are taped live during the festival. Each night, musical talent performs live for the Eat to the Beat concert series, including the likes of American Authors, Postmodern Jukebox, and 10,000 Maniacs. There is also a game of hide and seek with Remy throughout the park.

► For Kids: No, this festival is not just for adults! Along with the game of hide and seek, and the concerts, there are great options for kids. Whether they like chocolate, like our little guy, or waffles or even sausage and filet mignon – they can share in the fun of trying out new cuisines and expanding their palates. Of course, as always, the kids can help Agent P save the world as you eat your way through the park! 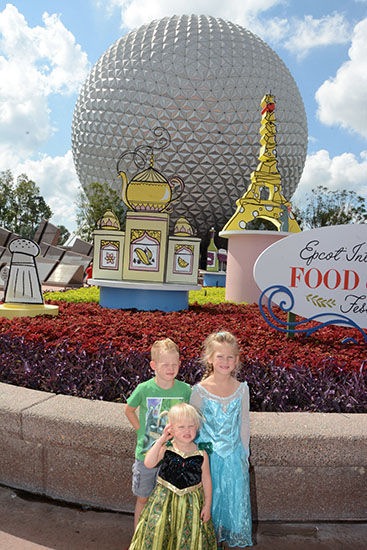 Have you attended the International Food and Wine Festival at Walt Disney World? What was the best thing you tried? Mine was, hands down, the spicy hummus fries in Morocco! Gabriel’s was the Salmon BLT Sushi. Widmore loved the Chocolate Torte, and Pie was crazy about the German Waffles! Little Eclair preferred the snacks we picked up in the French Boulangerie, specifically the giant macaron filled with lemon curd and raspberries.

► Nap-Time Version: Our family’s fun filled day at Epcot started out with hunger pains and ended with stuffed bellies thanks to the International Food and Wine Festival.

Check out our favorite restaurants to eat at when visiting Walt Disney World, and our take on the Disney Dining Plan!