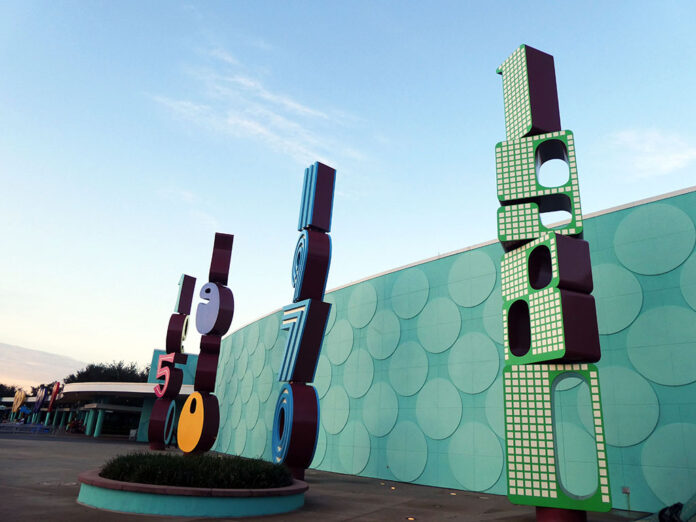 We’ve stayed at every type of resort Disney has to offer. And while we’ve mostly enjoyed our stays, we can, and will, and want to, freely admit that some visits have been more magical than others. The value resorts at Walt Disney World are catered towards families on a budget, which is hilarious considering the nightly price tag, and they are overrun with “joyful” people. We thought the worst hotel at Walt Disney World was the All-Star Movies resort, but actually there is one that’s even worse: Pop Century.

Last year we stayed at the deluxe resort, Animal Kingdom Lodge, so naturally it would be a shock to the system to return to a value resort. Just the lack of being able to get zebra domes whenever you want is a huge blow. But,… we’d heard great things about Pop Century. It was supposed to be a higher quality value resort, like The Art of Animation. The rooms are supposed to be bigger, updated, and have a preferable feel to the All-Star resorts. After all, they came a full 10 years after the All-Star Resorts were completed.

Quite possibly, the most unhappy person at Walt Disney World checked us in. Gabriel began the exchange while I managed the luggage and the kids in the designated playspace. He called me over a few minutes into the conversation asking which credit card we wanted to attach to the our magic bands. For some reason I took over at this point. She didn’t acknowledge me, or act in any way as if I was standing in front of her about to launch on my seven day vacation at The Happiest Place on Earth.

She then said to me, “Do you know your special code?” with annoyance and spite dripping from her tongue. Not understanding, I asked what she meant. She responded, “The pin you enter every time you use your magic band. You’ve been here before,” as she cocked her head from side to side, flared her nostrils and turned her lips upside down while looking at me as if I’m the stupidest person on the planet.

I let well enough alone, but that wasn’t the end of it. She then told us of the 2,880 rooms at Pop Century, only one was available for check-in at the time we arrived. She pulled out a map and bluntly swung her finger around and pointed at it. She said we could either take this room, or we could wait another 8 hours for the room that was designated to us. Obviously, we chose the one solitary room that was available right now. Without another word she typed furiously on her computer for the next 10 minutes, no doubt leaving notes about how much she hated our very existence, and then thrust a map at me and told me to walk out the lobby and around the corner.

When I got back to Gabriel I asked him if she was rude to him also. He replied that she wasn’t very friendly. Gabriel is not timid, by any means, but it takes a lot to get his goat. I on the other hand am the complete opposite, but I felt like this warranted getting a little upset.

Pop Century is a retro themed hotel paying homage to the past several decades of stereotypical pop culture. There is the innocent, swing dance, sock hop 1950’s sector; a hippy dippy 60’s peace loving branch; a groovy discotech 70’s era section, and a combined 80’s and 90’s zone highlighting the beginning of the technological era as if those of us who lived through the 80’s and 90’s are too dense to know they aren’t the same decade.

This hotel was unveiled in 2003, and was just Phase 1 of this property. Phase 2 was put on hold because no one wanted to stay here, and so in 2010 they officially cancelled Phase 2 and turned it into Art of Animation instead. We can attest, Art of Animation is far superior (post coming soon).

Our room wasn’t themed, not even in the slightest. It wasn’t even themed nicely. I thought we had been transported back into a Motel 6. Our family of five was squeezed into a 200 square foot room with two double beds. The sheets on the bed were plain white. There was one, count it, picture on the wall. The dresser was brown. There was absolutely nothing indicating that we were even at Walt Disney World.

We walked into the room and placed our baby on one of the beds, and just stared at each other for a full 5 minutes. Then I picked up the phone and asked to speak to the manager. I proceeded to tell her how shockingly rude the person who checked us in was. She apologized, of course, and offered us fast passes for our first day at the parks. That was nice, and I’m not sure what exactly I expected her to say, but I didn’t feel like she was taking it seriously enough. So I said, calmly, “You know, we come to check-in, after taking a midnight red eye flight from across the country, and the person checking us in can’t bother to be nice to us let alone smile at us? All the while, you’re holding a promotion right now with the Bucket List Family where they are staying here for free, for 30 days, and are woken up every morning with 2 suitcases full of free merchandise. Did you have this lady check them in?”

I was perturbed. I cannot adequately express to you how appallingly surly this woman was. I wasn’t asking for a free stay, I wasn’t asking for suitcases full of goodies, I wanted a heartfelt apology that the start of our vacation was soured by some buffoon who hates her job and has to start a grudge match with complete strangers. I’ve spent thousands and thousands of dollars at Walt Disney World, Disneyland, and every freaking Disney park across this entire globe and when I come to the parks, and the hotels, and the restaurants I expect you to treat me nicely!

After this comment, the manager asked what she could do to make it right. At this point I brought up the room. I said, “Beyond this, did she purposely put us in one of the crappiest rooms on the resort?” as I described the room to her. She sheepishly answered that we were in a preferred room, based on proximity to the main building, but that yes, it was a bit under furnished and hadn’t been remodeled. I asked if all the rooms were two double beds, or if they had a room with two queens, as that would be greatly preferred. I just wanted a room with two queen beds. I needed a room with queen beds. We had five people that had to sleep in this room, and the double beds were going to be a tight squeeze adding to the anxiety of the situation. She responded that yes, they could do that, as most of their rooms were in fact two queens, and then she put me on a brief hold. When she came back she said that instead she was going to transfer us to a suite at the Art of Animation!

That was not what I expected, but I didn’t protest. I’m sure the gesture was more of an opportunity to get me out of her hair than a desire to make right by the situation, but we took it! We’ve stayed at the value resort, Art of Animation resort twice in the past, and we love it. We definitely weren’t disappointed to head back over there.

► For Kids: Save your money and stay anywhere else. Of the value resorts, this may have the most fun theming. The kids will surely love running in between the monumental foosball players, and swimming in the flower shaped pool, but you will be cramped and you’ll be rigging a place on the wall to stow your luggage. That’s the best case scenario. Worst case, you’ll be accosted by the rudeness of the castmembers here and be sent to jail for spitting in their face.

Have you stayed at Pop Century? How was your experience? Which is your favorite place to lodge when you’re at the Happiest Place on Earth – most of the time – Walt Disney World?

Check out all the other places we’ve stayed at Walt Disney World (coming soon), and The Top Things We Hate About Disney!