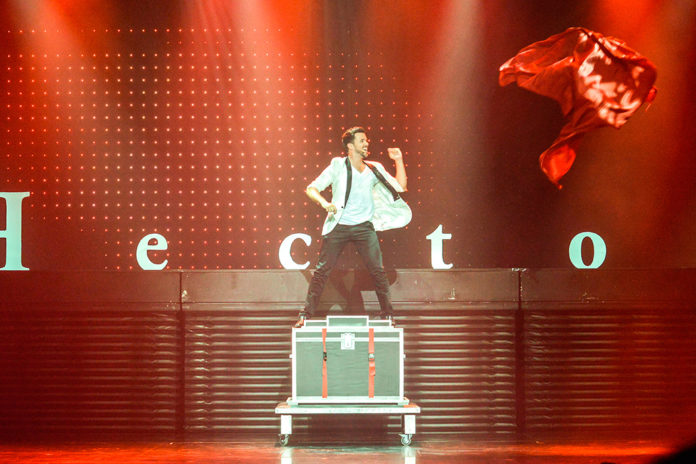 I don’t want to know how magic is performed. As far as I’m concerned, it’s all real. I am the giddiest person in the audience, even more so than my own children sitting next to me in the auditorium.

I love watching each and every illusion and marveling at the wonder of it all. I love gasping, oohing, aahing, and holding my breath during every trick and sitting on the edge of my seat waiting to be dazzled with the next incredible feat.

This is exactly what we experienced on our Disney Cruise sailing through the Mediterranean aboard the Disney Magic when we were delighted to watch the performance of Hector is Magic.

Hector is from Seville, Spain and calls himself an optimist, traveler, son and proud brother, and of course an illusionist. He is both a magician, an illusionist, and a skilled shadow puppeteer. He exudes happiness and the smile on his face is infectious.

He totally has the eyebrow raise down to a science. He doesn’t feel like a showman. He just looks like a regular guy up on stage sharing the excitement of a trick he just learned with all his best friends – and he can’t wait to show them how cool it is.

He has no pretensions or superiority. His presence is contagious. Along with that he is charming and lovable, and when you see him on stage, or around the ship, you just want to be around him.

Hector is considered one of the world’s seven greatest illusionists. There are 7.442 billion people in the entire world, and Hector is featured around the world as one of the best.

He has toured around 55 countries, and along with watching him perform on the Disney Magic you can also find him on Royal Caribbean ships, in Vegas, on Broadway, in Macau, China, and watch his awesome eyebrow raises and magical illusions via YouTube. Clearly, we loved his show. We’ve been on three different Disney Cruise ships, for a total of 26 days, with each night featuring a Broadway show or a featured performer, and Hector is Magic still takes the top spot.

His show is a blend of youthful energy, magical exploration, and discovering the child within you that never loses that sense of awe about the incredible world we live in.

He’ll impress you by creating items out of thin air, astonish you with disappearing and transformative acts, and mesmerize you by changing the very sight of something before you even have a chance to blink. ► For Kids: For kids, for adults, for babies – Hector’s show is for everyone!

Are you in the same boat (pun intended) when it comes to Magic? Or do you like to know what’s behind curtain number 3? If you want to know, check out the video below to learn from Hector himself!

►What We Learned: It’s possible to summon food from a drawing!

If you ever get a chance to see him perform, don’t miss Hector is Magic.

► Nap-Time Version: Don’t miss one of the seven best illusionists in the world on the Disney Magic Cruise Ship as it sails on select itineraries throughout Europe.