Home Where Are We Going? Asia Baptized in A Foreign Land: Twins Baptism Day in Korea 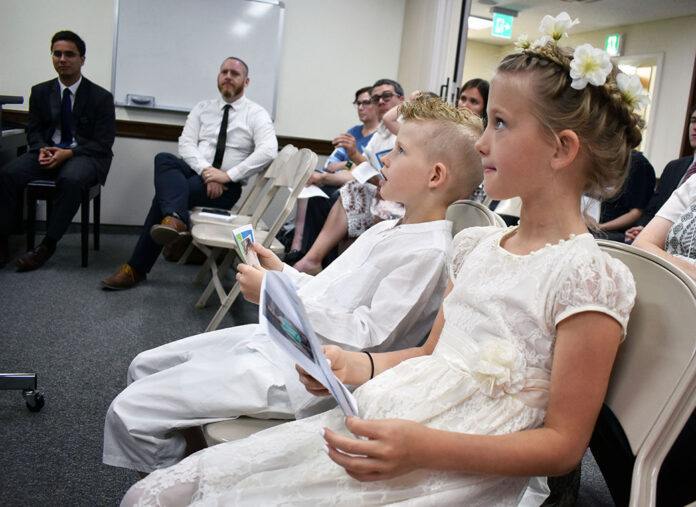 Today was a perfect day. We had a baptism for kids with the twins who chose to be baptized in South Korea as members of The Church of Jesus Christ of Latter Day Saints, and receive the blessing of the Holy Ghost.

As a family we participated in this sacred ordinance and witnessed the transformation of their spiritual rebirth. It was both less emotional than I thought it would be, and more profound that I previously understood. The Twins Baptism Day in Korea was perfect.

Twins Baptism for Kids in Korea

We knew choosing to have them baptized in South Korea would present a few challenges, but we also knew it would be a unique experience for them and something that would forever be a blessing and a conversion in their testimonies and growing relationship with Christ.

We were concerned it would just be our family and the Branch President attending, because we didn’t know anyone much yet and the primary children didn’t speak English.

I kept telling myself that all that mattered was the ordinance. After all, I don’t remember who came to my own baptism. I just remember the dress I wore, the feeling I had, and a special crystal clear Christmas ornament I was given to remind me how pure I was after having been baptized. That was what mattered.

Getting to the Church

Yesterday we wrapped up all the odds and ends, and this morning we started with a strong healthy breakfast of sausage, eggs and bell peppers. We all showered and changed into our Sunday best, except for the twins.

I didn’t want them wearing all white on the subway, so we just had them dressed in play clothes until we arrived at the church.

We braided Pie’s hair on the subway. She wanted a crown braid and decorated it with white flowers like Rapunzel.

We ran into Scott, a member and faculty member at the Incheon Global Campus, on our way to the Subway which was a blessing because while we knew which stop to get off at, we didn’t know which exit. The Incheon City Hall subway stop is a transfer point; our line is four stories underground and there are more than seven exits to get off at. Apparently, #7 is our exit and now we know.

Other than almost losing Pie’s tights, we had an otherwise fairly uneventful morning on the twins baptism day. We were a little bit late, but it was their own baptism so you can’t really be late for your own event, can you?

We changed into the twins baptism dress clothes and began the service.

The Branch President, President Bayly, presided and created a beautiful program for their baptism for kids.

We got Molasses’ 6 month pictures taken right before we left, and while I toiled over whether or not to take the time to have photos done, I am so glad we did because it also means I had 8 year old pictures of the twins. I didn’t even realize that until the twins baptism day today.

The twins chose their favorite primary songs, which both happened to be from the Primary Program last year. “I Know That My Savior Loves Me” and “Gethsemane“. One of the local missionaries played the piano and he was absolutely beautiful. They were the perfect choice for their baptism for kids.

Eclair was chosen to give the opening prayer, but she decided to pretend she was shy and I ended up saying it for her while I held her, and she hid her face in my shoulder. Gabriel gave the talk on Baptism. We would have asked a member of the Branch but we thought no one would be there.

In fact, we ended up with quite a few people there! The Branch President and his family, the 1st counselor Scott, another faculty member and his wife plus their daughter and son-in-law who were visiting and their two children, the missionaries from the area plus three investigators who came as well.

It was such a special baptism for the kids.

Gabriel’s talk focused on how the twins were following the example that Jesus set by being baptized, and by doing so they are creating an example for others. He brought up how Eclair and Molasses are watching them get baptized in South Korea and are now wanting to follow the example of Jesus more because of them.

He reminded them that we are all a family, and by being baptized and choosing to become a member of the church, they too are becoming disciples of Christ and are a part of the family that is the church. We are all brothers and sisters.

And, just like in Utah, we have family in Korea. We are brothers and sisters with every member around the world; we help each other and try to do what Jesus would have us do.

The twins then played a duet of I Am a Child of God.

Widmore played the guitar and Pie the violin. Pie learned this song months ago, but Widmore just started practicing it this week. It’s a difficult guitar song and he worked so hard all week to get it right. They weren’t perfectly in sync, but they were so darling.

Widmore sang along as well and you could feel how much that song meant to the both of them at their baptism for kids.

Widmore was baptized first. He wore clothes that were provided at the church, which meant a long tunic shirt that reached his knees and pants underneath. He went under and was fully submerged on the first try. He stood at the top of the stairs on the boys side of the font to watch Pie.

Pie wore a long dress very similar to an ordinance dress and it reached her knees. I was worried with her dress being so long and the flowers in her hair, but it also went perfectly for her. They both came out of the water beaming.

When Pie and I got into the dressing room she said she felt so good, and she loved being baptized.

This girl is so special and such an amazing wonderful child. They truly both are.

We got dressed again in their white dress clothes and joined the congregation.

Talk on the Holy Ghost

After the baptism for the kids, I gave the talk on the Holy Ghost. I talked about the union between our bodies and our spirits and how both had to be baptized. I reminded them how God gave us a spirit so that we could have eternal life but with our spirit we would also never be alone.

The Holy Ghost is a friend, a warning, a guiding light and comforter. He is the perfect gift. I reminded them how I made them a special blanket a few years ago but it would never keep them warm if they never used it.

Lastly, I gave them a gift box and asked them to open it. Inside, it was empty except for a red sticker on the bottom that said love. It represents The Holy Ghost. We can’t touch or see the Holy Ghost but we can always feel it.

Confirmation of the Holy Ghost

Pie was confirmed first. Widmore was upset about that because he was born first, but because he was baptized first we let Pie go first for the confirmation. I was holding Molasses in the back trying to keep her quiet, so I wasn’t able to really focus on what was being said – plus a woman’s phone kept going off at full volume during both of the confirmations which was incredibly frustrating.

I know Gabriel blessed them to have a full life and make good choices and follow the teachings of Jesus.

The Branch President reminded the twins to remember how they felt today forever, and hold it in their hearts to guide them through the difficult times in their life. We ended with a closing song and prayer and we all met in the cultural center to have refreshments. We brought cookies, grapes and water. It was a simple and joyous baptism for kids.

We took the subway home and we stopped for popsicles after their baptism in South Korea! Of course!

After the baptismal program we took a nap, and then it was time for dinner.

The night before was Pie’s turn to pick a special place to eat for the twins baptism day in South Korea. She chose Shake Shack.

For Widmore’s turn he wanted giant crab legs, and so we found a seafood buffet in the Home Plus Mall. It was perfect for Widmore and he was in heaven.

We came home and watched our current favorite show She-Ra and the kids are now sleeping in a blanket fort they made from tables and a desk in their bedroom. I’m listening to them breathing heavily and one of them is snoring while I type this. I’m sitting here thinking how especially grateful and fortunate I am to be their mother.

After years of not believing we’d ever be blessed with the chance to bring children into our family I’m frequently overcome with emotion when I look at my kids and realize I now have four of them!

I don’t want them to have a perfect life and be given everything they’ve ever wanted. I want to teach them that they have to work for the things they want and that life is exceptionally hard, yet beautifully rewarding.

Most of all I want them to always know that they are loved beyond any measurable quantity and that no child existed who was wanted more than they were. I told them a few nights ago you could fill up a bathtub with how many tears I cried hoping for them to come to Earth.

Then they asked, “How many bathtubs could you fill now with your tears of happiness?” I’d never thought about that question, but I told them it would easily number in the millions.

Check out our family visit to the Korea LDS Temple, and attending primary in a foreign country!