Home Texas Galveston Where to Eat When you Can’t Get Your Kid an Elephant Ear... 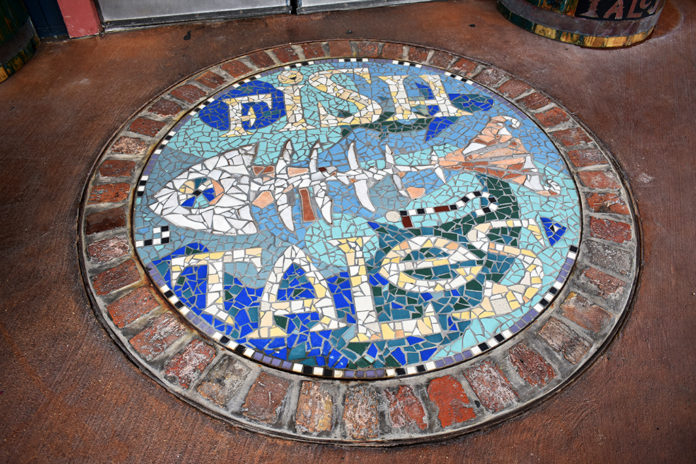 We actually had our heart set on some Elephant Ears at the pier to be enjoyed while riding the Ferris Wheel at the end of the dock of Pleasure Pier, but unbeknownst to us, said Pleasure Pier is closed Monday thru Thursday! After drying a bucket of tears and wringing out our soaking clothes from the injustice of it all, we headed across the street to Fish Tales for an early dinner. The outdoor seating on the top balcony provided a beautiful view of everything that was closed off to us, and the food was quite good as well. Though Yelp gives this establishment an average rating of just three stars, we felt it deserved like 3.1 stars.

Fish Tales is a local Galveston restaurant serving traditional seafood menu items, plus pasta and more. It is quite large with an old fashioned hard serve ice cream shoppe at the entrance with over 20 different unique flavors including carrot cake, and superman. There are two levels with outdoor seating and a bar offered on the second level. The restaurant itself is decorated with southern eclectic features including fishing paraphernalia and a sign that reads “An Ugly Woman Invented Alcohol” that inspired a lengthy discussion between Gabriel and myself.

While our kids argued about whether or not it was fish tales or duck tales, finally solved by the name written on the menu, we ordered the fish tacos, fettuccine alfredo with chicken and mushrooms and the flounder fish sandwich. The fish tacos did not compare to Miller’s. They were good, but not great, and so spicy they made you cough the second your mouth covered the perimeter of the shell. They were imbalanced and disappointing.

On the other hand, the founder fish sandwich, with two generous pieces of fish, was on point. It was delicious and I hated to share it. Only because my love for Gabriel runs deep did I allow him to enjoy it along with me. We both agreed it was excellent.

The kids shared the bowl of fettuccine alfredo which had hints of bacon in the sauce. Our server divied up the meal in three separate bowls which saved us the trouble and was very thoughtful, however, the chicken was overcooked and tough and the price tag was a little high for a meal that was only partially edible.

► For Kids: The kids menu items rang up at an average of $9 a plate, which felt a little high. Though they did include a scoop of ice cream, the portions for an adult meal at $16 was a better value and fed all three no problem. We ordered each of the kids a scoop of ice cream for about $2 each, and when our three year old wanted a mix of chocolate and vanilla there was no hesitation. Fish Tales is a family friendly establishment, but it is definitely not budget friendly.

Have you dined at Fish Tales? We wouldn’t have given it the time of day if the Pier hadn’t been closed. Other than the fish sandwich, we weren’t too impressed.

► Nap-Time Version: Fish Tales is not the best restaurant Galveston has to offer, but probably not the worst either.

Check out our review of Miller’s Seawall Grill in Galveston, which we loved, and our hotel stay at the Hotel Galvez & Spa prior to our Disney Cruise on the Wonder (coming soon).