Home Where Are We Going? Caribbean Experiencing Tragedy During a Family Vacation in Puerto Rico | Questions for... 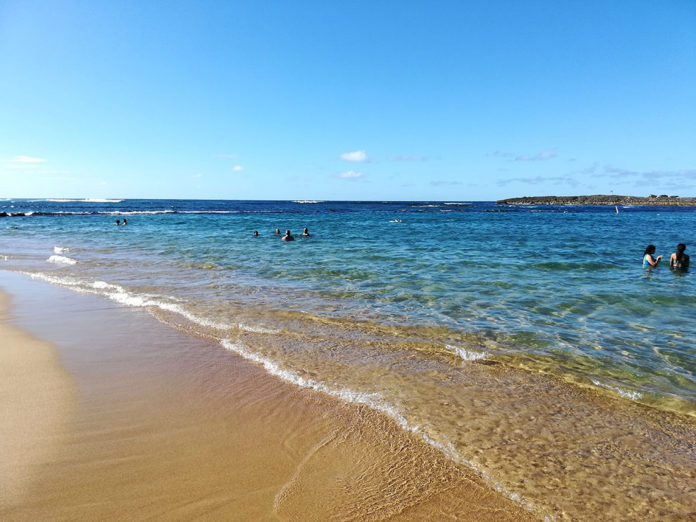 I was completely oblivious to what was going on, until the screaming and the shouting became so loud and overpowering that it was impossible to tune out. The three older kids and I were swimming in the ocean at family beach Balneario El Escambrón. The beach here is protected by a coral reef that creates a half moon circular shape and a protected swimming area extending out from the calm beach.

As we heard the shouting we stopped playing and quickly turned our attention to the animated voices of the crowd. They were all pointing in the same direction, and our eyes followed the line of sight until they rested on one man standing waist deep in the water near the outcropping of coral rocks. He was wrestling with something, and it was difficult to determine what was happening. As we looked back and forth between the man in the water and the people shouting, we discovered they were frantically trying to capture the attention of the lifeguard.

Still unsure of what exactly was going on we saw the lifeguard run in the direction of the commotion. We could glean enough from the crowd that something very serious was happening, even though it wasn’t clear yet what that was. We started to make our way back to the shore, and as we looked back to the man in the water, we witnessed him struggling with what looked like a large limb of sorts protruding out of the water.

After we reached Gabriel and the baby at the shore, everything came into full view. The man we had watched laboring in the water was now carrying a lifeless body back to the beach as a congregation rushed to his aid.

Gabriel explained that while we were playing, he caught sight of a body moving unnaturally near the rocks just to the left of us. It was immediately recognizable that although he didn’t know the exact condition of circumstances, this person needed help. A snorkel and mask were visible on his head, but his movements did not match the behavior of a swimmer. He began to rush out but realizing he couldn’t make it far with our infant, clamored to garner the attention of someone who could help.

As if in slow motion, we watched the crowd begin to recognize the severity of the situation. One of the people helping to float the body to shore ripped off the snorkel mask to allow more air to reach the man’s lungs. We saw the rescuers drag the body away from the water lapping at the beach and without hesitation perform CPR. An agonizingly long parade of people all came to his aid, many who could do nothing but clasp their hands together in prayer.

We kept our distance and sat on the shore hoping and praying for this man. We understood that we were not in a position to help, and all those who could, were already providing assistance. Our efforts were meant instead to offer respect to this man and the tragic aftermath of an accident. These are all the things we discussed as our children bombarded us with questions about what was happening.

We waited until the ambulance arrived and the body was removed before we left the beach. What made the situation worse was that no family or friends were wailing in the distance. No one seemed to know him, and that devastating realization brought up an entirely separate set of questions.

The day turned from a fun, frivolous and carefree day to a melancholy, bereaved and confusing afternoon spent in deep conversation. Why was he alone? Where did he come from? Why didn’t he see the rocks? Why didn’t anyone see him earlier? Did he know how to swim? What if that happened to us? Who was he? Was he going to live? Many of these questions had no answers.

While most of our family conversations up to this point regarding death revolved around the philosophical quandary of what happens to us when we die, this took a backseat as we wrestled with the more pressing question of how did this tragedy happen, and could it have been prevented? It’s one thing to have a discussion regarding water safety, using the buddy system, being wary of strangers, or screaming like hell if someone tries to grab you, but it’s quite another entirely to witness firsthand what could happen when you don’t follow the rules.

It would be easy to just say see! Look! This is what we have been warning you about! This is why we have rules! Do you want that to happen to you? Fear and dread are typically excellent motivators – but the reality is that children are bombarded with rules everywhere they go. Many of which feel arbitrary and pointless to them. We cart them around with us on our various errands, while more often than not they have little say in the matter. When it comes time to ask questions, they are met with frustration and impatience and they hear the word no, wait, just a minute, hold on, and stop without any further explanation.

All the rules bleed together, and they have neither the life perspective or experience to provide context for why a rule should be obeyed. It’s our job as parents to help them navigate those rules. So here we were: Unexpectedly face to face with the horrors of what every parent fears for their own children.

We didn’t know what to say, or what to do, or how to help our children cope with something not even I had ever witnessed before. Though our children understand the concept of death; particularly so being a family that abides by the Gospel of Jesus Christ, and even experienced it through the passing of their grandparents and multiple pets, the loss of life as the result of a fateful accident was something we had only warned them about.

In this moment we were all grappling with understanding together. We wanted to give our children foundational answers. Answers that would help them not only interpret their experience but give them comprehensive skills to maneuver the emotions that come with witnessing a tragedy:

We learned from the news the next morning that the swimmer had died at the beach that day. Our conversations regarding this tragedy lingered throughout our time in Puerto Rico and beyond. The thought that in the briefest of moments everything can be snatched away without warning is paralyzing. After the numbness faded, we poured out our condolences and we accepted the gift we were given. The gift of safety, belonging, and togetherness above all.

Read more about our family’s trip to Puerto Rico.