Home Play Time Cruises What if Cinderella Didn’t Get Her Happily Ever After? | Twice Charmed... 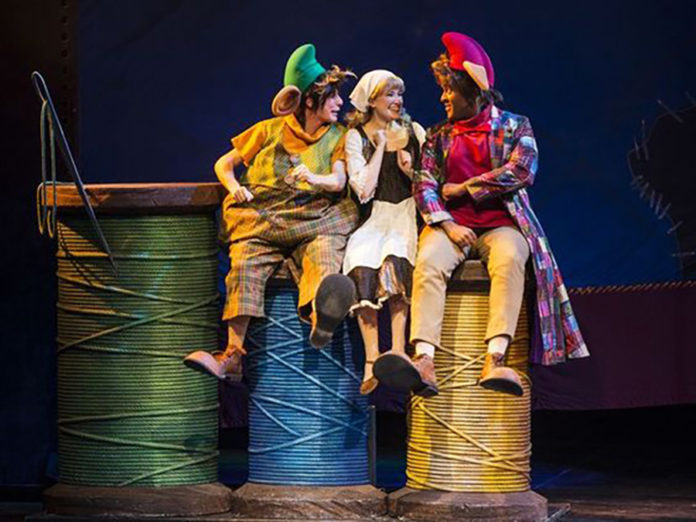 Twice Charmed. This is the tale of what happened after Cinderella got her fairy tale ending. After she tried on the glass slipper and was whisked away from a life of cleaning cinders off fireplaces. After Prince Charming swooped her up and smothered her with kisses.

After the shrill cries of her step-sisters stopped ringing in her ears and giving her daily headaches. Wait, not that one. Not just yet.

Actually, this story doesn’t occur at the castle and it’s not about the dozens of babies Cinderella popped out. It’s not about Queen Cinderella, or about her payback on her wicked step-sisters. This is not the sequel of Cinderella telling the story all about her happily ever after.

Instead, this story has an evil fairy Godfather, time traveling, and of course, several catchy new songs to help weave the sinister plot along.

Where Can You See Twice Charmed?

Disney’s Cruise Line is lauded for many things: excellency in detail, rotational dining, and of course, their unique Broadway Style Shows.

Every night on a Disney Cruise you are invited to the Walt Disney Theater either before, or after dinner. Depending on the ship, and on the cruise route, the theater will present a show, a musician, or even a movie sometimes.

But it’s here in this theater, that Disney puts on incredible choreographed Broadway shows with original music and talent hand picked from all over the world. Sometimes termed “off Broadway”, these shows are just like what you’d expect at your local theater. Extraordinary music and singing, dancing and acrobats, beautiful costumes, and compelling story-telling.

One of these such shows can only be found aboard the Disney Magic. Twice Charmed is that particular show, and it cannot be missed.

How is Twice Charmed Different than Cinderella?

Twice Charmed is an original Disney production with a story line you haven’t heard anywhere else, because it doesn’t happen in this time line. It happens in the multiverse. Yes, of course that’s not just for Marvel movies.

In this version of events, the evil fairy Godfather, Franco DiFortunato, resets time back to when the Duke arrives with the glass slipper. Instead of locking Cinderella in the attic, this time around Lady Tremaine and the step sisters break both slippers, and a whole lot of other disparaging acts to get what they want.

This is their chance to undo Cinderella’s happily ever after and steal it for themselves.

The twist is that this story picks up where the original movie left off with a new glass slipper that fits Anastasia instead.

Only Lady Tremaine and the step-sisters, plus Cinderella know what happened. The rest of the cast is simply moving forward in time. Because the slipper fits Anastasia, the Prince believes she is the one he fell in love with at the ball.

The rest of the story is about if, when and how Cinderella will get Prince Charming to remember that she is the one that he’s supposed to be with.

Twice Charmed is a story for the whole family with both dramatic storytelling and comedic relief. The run time is just under one hour, and is fast paced to keep you entertained at every turn.


This play has everything you love about classic Disney with an added edge that makes it very contemporary. Both kids and adults will enjoy this entertaining story.

Playwrights Alan Zachery and Michael Weiner wrote the tale, including the music and the lyrics. This pair have a long history with Disney writing other stage productions for Disney parks and television shows. They also wrote Once Upon A Time’s musical episode.

Clearly, they have an obsession with alternate realities.

Zachery and Weiner started collaborating when they were in high school and called themselves “drama jocks”. Instead of sports they spent their extra curricular time playing piano and writing songs.

Both musicians compose the lyrics and score together, and attribute their success to their lack of ego. They aren’t afraid to scrap the parts that don’t work, and try to make whatever they are working on less work, and more fun.

The production value of Twice Charmed is famously Disney. The set and costume designs are remarkable and stunning. They are truly gorgeous and some of the best you’ll ever see in the business.

Helen Huang, a veteran costumer, designed all the costumes for this production. The final scene of the play produces real magic where the costumes change shape, color and form right before your eyes.

From Cinderella’s rags, to her Gus Gus and Jack who appear larger than life and are comically playful. But the real star of the show is Franco DiFortunato, who easily besets the audience’s commitment to Cinderella.

DiFortunato enters the stage with a winsome smile, and a collapsible top hat. He wears a red and orange cape that appears to be on fire, and swings with every gesture, lending to the notion that he came straight from the underworld. The design of his physical costume matches his captivating personality, and try as you might to resist him – you just can’t.

From Twice Charmed came Cinderella III; an animated direct to video sequel. There is no evil fairy Godfather, but Lady Tremaine does brainwash the prince into believing he’s in love with Anastasia.

Thankfully, this was the last of Disney’s direct to video franchise.

It sounds awful yet, the Amazon reviews are surprisingly complimentary with rave praise like “better than expected” and “nice surprise”. One fan loves it for its nods to “science fiction”.

Yes, we agree, that is going a little too far.

► For Kids: Who has ever asked what if? You know your kids do every second of every day. This is an incredibly fun story that will answer this question in regards to the most beloved Disney tale of all time.

What if Cinderella didn’t have the other glass slipper? What if a lot of things.

For a whole 60 minutes, you can have someone else answer that question, and enjoy every minute of it.

► What We Learned: Sometimes the evil bad guy is the best character in the show, but it’s important to remember that charming doesn’t mean good! Lesson learned kids!

Disney’s Broadway Original: Twice Charmed is lively, spontaneous and very intriguing. It plays on the emotions of the audience, who have all grown to love Cinderella since she came into our lives in 1957.

► Nap-Time Version: Disney Cruise Line’s best Broadway show aboard all their fleet. Twice Charmed answers the question what if, and tells the hilarious story that follows with one of the greatest villains of all time.

Disney Cruise Line’s nightly entertainment doesn’t stop here. Check out all their nightly shows, first run movies in the Buena Vista Theater, and fun activities all over the ship.