Home Cribs Airbnb Renting your Home on Airbnb: Part 3 | What I Learned From... 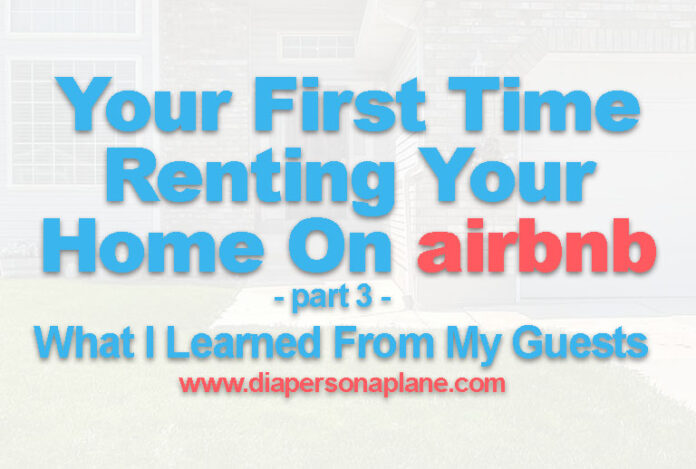 Renting your Home on Airbnb: Part 3
What I Learned From My Airbnb Guests

Our first group of guests was comprised of several members of a family coming to stay for a wedding. At first, communication was poor with these guests. As soon as we received confirmation of their trip, we reached out to thank them for booking. We asked them if they wanted to use the pack and play or the air mattress so we could have it prepared for them, and instead of answering they asked instead if we had a coffee maker.

A day before their arrival I reached out again to let them know I’d updated the House Manual, and that GPS should direct them straight to our home. If they had any questions we were happy to help.

We didn’t hear anything until the next morning when they said they’d arrive between 3-4 in the afternoon. We wanted to meet our very first airbnb guests and give them the lowdown. We were curious, excited, and as it so happens our guest was an airbnb host as well so we thought we might be able to glean a few pointers. But by 4 pm they hadn’t shown up. We had a hotel booked in the area and decided to go check in while we waited. I ended up getting violently ill, so we ended up cancelling the meet and greet and instead gave them the lockbox key code.

For someone who had zero ability to communicate prior to their stay, they turned out to be chatterboxes. They never needed any help, assistance, or had any problems, but they asked questions about everything including if they could feed our chickens, how we set up the chicken’s water dispenser, if they needed to check the mail, etc.

We contacted them the morning of check out and asked them to let us know when they had fully checked out. We wanted as much time as possible to turn the house for the next set of guests. Plus, it was a nice courtesy to know when we could take back possession of our home.

Upon first look the home was extremely clean. They even made the beds, which was totally unnecessary and a bit gross to me because I fully expect and demand clean bed sheets when I come to a new place to stay. They took out all their trash, cleaned all their dirty dishes, put dirty items in the laundry room. They were great guests.

Once we started cleaning though, we realized everything had to be done regardless of how things look on the surface. There was hair everywhere, smudges on the walls and bathroom fixtures, basically all the things that happen when you live in a home. Nothing was out of the ordinary.

We changed all the sheets with new clean sheets, and had to make sure all the towels were washed and cleaned for the next guests. It was at this point we realized one of our towels was missing. This was super annoying, but not the end of the world.

Their review for us was 5 stars. They had no complaints except the no shoes rule, because it made the carpet very difficult to walk on with socks. For the record, there is no banister because both sides of the stairs is a half wall – that is the banister.

We also gave them a 5 star review. This turned out to be a great experience for us! We were sold.

Our second group of guests was a company in town for a convention. They had 8 guests. I reached out to them after booking, same as with the first guests. They let me know in advance they wanted to use the air mattress. It was nice to take the guess work out of that. They also contacted us to find out if they could check in at 1230, which we could not accommodate considering our other guests didn’t have to check out until 11.

Still, we got to the house early and it was in great condition from the first checkout so we contacted them to let them know we would be ready by 1pm. We never heard back, and by the time 2pm rolled around we decided to leave town. Again, though we wanted to meet these people, we were tired, gross, unshowered and had been cleaning all day and weren’t in great shape to meet guests. On top of that, we were leaving for Arches National Park (we had a friend who was willing to help if an emergency arose), and we wanted to hit the road.

Because there were 8 guests, we left them 2 keys and a back up in the lock box which we did not tell them the code. We left the door open and the keys on the kitchen counter. We got a call around 4pm from a different guest than the one I was communicating with asking how to get in.

Other than that, we didn’t hear a word from these guests the entire week they stayed in our home. We sent them the same courtesy check out message, and things went off without a hitch.

When we arrived back at our home late that night, they had turned off the A/C. This was a huge inconvenience. We live in the desert. Our home was nearly 90 and we had to clean, change sheets, and get our kids in bed for the night while trying to figure out where we had stowed everything from two weeks earlier. Sweating like a dirty chimpanzee did not improve my mood.

Secondly, they also took a towel! This was infuriating. The cost for both towels was only $4, but it was more the fact that both groups took a brand new towel that just didn’t sit right. We think they may have used it to clean up a mess they made and thrown it away because it was stained, rather than leave it for us. Regardless, it still makes me mad.

They also tried to clean some sheets, which further indicates to me they made a mess. They washed both the bed sheet and the mattress protector which they then put in the dryer on hot heat which melted it. This not only ruined an expensive mattress protector, but it caused a huge mess in our dyer.

On top of those two things, being that there were 8 guests, and 7 of them were men, they made a huge mess in the toilets. A huge, disgusting mess if you catch my drift.

Other than those things, the house was in great condition. Those were the only remnants of whatever mess they did make. They didn’t follow the guidelines as strictly as the first group did such as cleaning all dirty dishes, emptying the fridge, and taking out the trash, but those are minor things that go with the territory. They also only left 1 of the 2 keys we provided, and we gave them a week to return it. After that, we charged them $25 as indicated in our listing (this is standard). However, we did not charge a security deposit so we have to request that money from them and they can choose whether or not to pay it, and then we can choose whether or not to pursue it through airbnb. Lesson learned: Set a security deposit.

This group gave us 5 stars, and ultimately we ended up giving this group 5 stars as well. They took great care of our home. They made a mistake with the sheets because they were trying to do the right thing. As annoying as it was, it didn’t cause any long term damage and was innocent enough. I’m also not going to charge for a $2 towel. If we continue to have a towel go missing on every stay, I will likely start to put a pre-warning charge (like the key) in the listing.

The other nice thing about airbnb is you can leave a private review and a public review. I did make sure to note in my private review to these guests that they ruined our mattress protector, if only to let them know how to not ruin a mattress protector in the future. Also, thank God for Sleep Education and similar blog articles, I could already decide on my next alternative mattress and topper.

In all, this was a great experience. Both groups combined stayed a total of 10 days. In that 10 days we made enough money to pay our mortgage the following month. We didn’t get to pocket all that money as we had to prepare in advance of their arrival, and find a place to stay while they were in our home, but that was the goal and it was achieved. It certainly wasn’t money we would have had otherwise.

The reality of the situation is that guests will use whatever they want. Ultimately they are treating your home like their own. They will go through your linen closet, they will take the spray nozzle off the hose, they will drink half the coffee, and they will pull out large foam cushions that are tucked away nicely under the bed that weren’t necessarily intended for guest use. It’s all part and parcel.

We will definitely be doing this again, but in a different city because we received a cease and desist letter from the government when we got home. Apparently we live in a restricted area, and apparently we have some incredibly nosy neighbors who can’t mind their own business.

What experiences have you had renting your home? We’d love to hear about it!

Will Glamping in Moab Actually Be Your Best Vacation? [The Answer is Yes!]