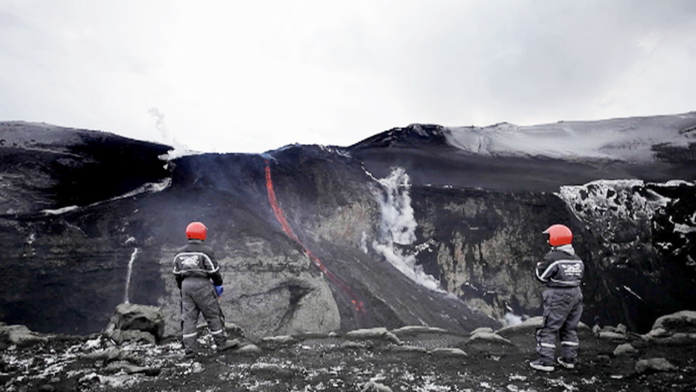 The Volcano House in the city center of Reykjavik doesn’t sell batteries, but they are open on Christmas Day. They are the only place we could find open on Christmas Day in Iceland, when my insulin pump ran out of batteries and we were desperate. That is just the how of why we came to the Volcano House, (you can read about that in our Iceland Christmas Celebration post) and even though we didn’t find what we were looking for, we enjoyed our time spent here learning about Iceland’s most feared geological system.

There are 200 volcanos in Iceland!, and they average an eruption no more than every 4 years. Living with erupting volcanoes is normal everyday life for the people of Iceland. The Volcano House is a geologic exhibition that features a film about the volcanic eruptions in Iceland and how it affects the residents who live here. There is a lot of emphasis on the Eyjafyallajokull eruption and the resulting devastation. The film is in English, but during the busy summer months, they also have French and German screenings. There is also a hands on display of Icelandic rocks, minerals, volcanic tephra, pumice, precious stones and ashes for viewing and purchasing, as well as a host of other knicks knacks that supposedly appeal to tourists.


I specifically remember the eruption of Eyjafyallajokull. I had just started working for the airlines, and all flights were grounded due to the ash cover. Ash is extremely detrimental to plane engines and there wasn’t a safe route around the eruption. I heard from traveler after traveler who was stranded for days needing to find a way out of the country heading west, without going in the opposite direction.
The Volcano House also has a nice cafe where they serve an alternative to skate. Their version of the putrefying shark is harkal, and they serve it daily. Gabriel hadn’t punished himself enough the first time around, so he ordered that, and the twins had some really tasty nachos made with real cheese. I ate one chip, because again, I had no insulin.

► For Kids: The film is a bit long, running 40 minutes, but it’s incredibly interesting. Younger kids might have a rough time sitting still, but they will love the display of rocks and minerals that they can feel, touch, grab and squeeze afterwards. This is an excellent world schooling educational opportunity for older children featuring history, geology, geography and disaster preparedness and evacuation procedures.

We are kind of obsessed with volcanoes. Isn’t everyone? We got to hike up to the caldera of Mt. Vesuvius in Pompeii and it was the pinnacle of my life! Someday soon, I’ll share that story!

► Nap-Time Version: Our visit to Iceland’s Volcano House geologic exhibition in the center of Reykjavik.

Check out our other fun adventures including chasing the northern lights and failing miserably, Ice Skating on Tjornin Pond, and hearing the voice of Reykjavik in the heart of the Hallgrimskirkja Church.