Home Georgia Atlanta Take Me to the Varsity in Atlanta, Georgia | What’ll Ya Have:... 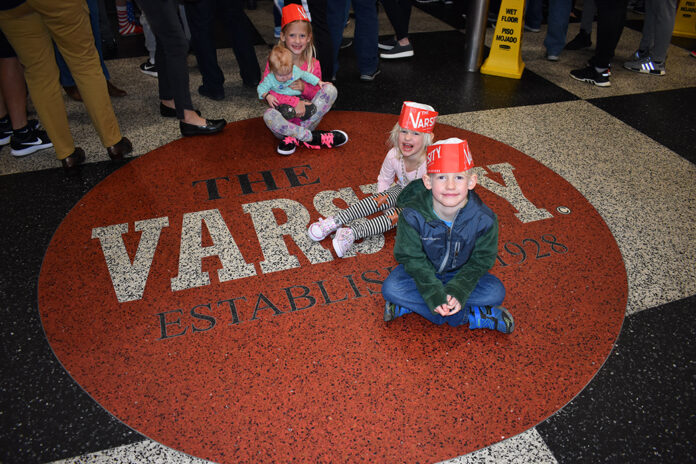 One does not simply go to Atlanta and skip the Varsity. The Varsity is an icon, a celebration, a landmark and an institution. It also serves up some boiled hot dogs, chili and their trademark orange drink to boot. And while maybe that might not sound like much, the Varsity is Atlanta defined. For as long as Gabriel can remember I’ve been talking about coming to The Varsity with kids, having dined here on many occasions as a child. I’m proud to say my kids loved coming here, even if all they wanted was a naked dog. 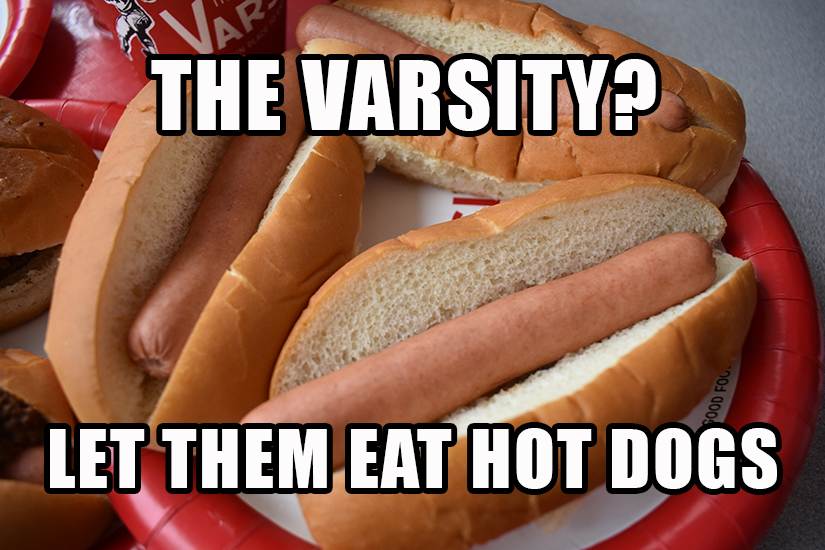 No, of course you don’t think of boiled hot dogs when you think of Atlanta. But you do think of what built this city. The Varsity first opened in 1928 and the crew there started slinging their famous phrase: “What’ll ya have.” Serving customers both indoors and outdoors, the Varsity quickly became a success and customers came from all over to hear singing carhop Flossie Mae, and comedian carhop Nipsey Russell.

Customers like Clark Gable after the premiere of “Gone With the Wind” at the iconic Fox Theatre.

The Varsity was named after founder Frank Gordy’s desire to open franchise’s at college campuses all over the states. It soon became, and still is today, the World’s largest drive-in restaurant. On opening day, The Varsity served 300 customers and earned $47.30. In 2019 that is the equivalent of $686.90. That figure grew and grew – a testament to the popularity of the restaurant. By 1950, carhops could earn $12,000 annually through tips alone and The Varsity employed 130 carhops. That’s $127,000 today!

‘Take Me to The Varsity’ was a well-known Atlanta phrase, and was also the best date night you could have in Atlanta.

By the 1970’s the business had shifted from primarily outdoor car dining, to indoor dining. Carhops had been reduced to less than 50, but that didn’t mean business had slowed down at all. The restaurant had grown so much it could now seat 650 patrons!

When the Summer Olympics came to Atlanta in 1996, The Varsity was called on to carry the torch, literally. Erby Walker was chosen to run with the torch. He began working at The Varsity at the age of 15, and worked at the iconic Atlanta restaurant for 55 years. He asked during his interview not what the pay was, but how many hot dogs he’d be allowed to eat. When his leg was finished, he brought the torch back to The Varsity so every Varsity employee could join in this historic Olympic moment.

The Varsity was our first family activity after our plane landed. I’d been regaling the kids with stories of my childhood for weeks leading up to our trip and living in Atlanta with their Aunt Tina. Walking into The Varsity for the first time in a long time, and the first time with my family, was such a throwback. The kids were amazed at how busy it was. They loved checking out each of the rooms in the 3,500 square foot restaurant and ultimately chose a table on the bridge.

We ordered a little bit of something from each section of the menu. Of course we each got a hot dog, and everyone got their very own orange drink. The onion rings are obligatory; we also tried a hamburger, the trademark chili, a chocolate milk and a peach pie. Before you go, check out the special lingo that puts copycat In & Out to shame. After our meal, we left the restaurant with two more large Orange Drinks. Yes, they are that good. They are made up of an orange frozen concoction that will give you a brain freeze with every sip, and every bit worth the pain.

► For Kids: The Varsity is such a fun outing with the kids. They’ll love the friendly banter between employees and patrons, the laid back atmosphere, and the menu isn’t too far out of their comfort zone. They even have a Varsity ice cream shoppe if you didn’t get enough orange drink to enjoy.

It’s an iconic establishment in Atlanta, and is always jam packed full of salivating customers chomping at the bit to eat Gordy’s famous recipes. The Varsity is particularly busy on a Sunday afternoon as everyone files out of the chapel and comes here for some afternoon grub. Ketchup and mustard are stacked high in every room of the restaurant, there are windows that look out on the city, TV that plays the local news, and lots of jovial chatting and friendly neighborhood conversation.

► Nap-Time Version: Our family trip to the iconic Varsity Restaurant with kids in downtown Atlanta, Georgia where carhops once earned $127,000 on tips alone.

Check out our full list of family adventures in Atlanta including the best BBQ joints, worldschooling the Civil War at Kennesaw Mountain and all the money we wasted at the Lego Discovery Center.