Home USA Florida What Is That On My Plate? Tiffins: A Family Review of Disney’s...

It’s ironic that every kid’s menu at Walt Disney World, regardless if it is quick service or table service, comes with the notification that every meal covers complete nutritional guidelines as mandated by the FDA. But somehow, they can serve adults a plate with nothing on it but a chunk of meat alongside a single dropping of what looks like a piece of animal poop from one of the hundreds of animals which reside at Animal Kingdom. This is a literal #stinkydiaper review of Tiffins, the signature dining experience at Animal Kingdom Park.

Throughout our past trips to Walt Disney World we’ve generally wanted to utilize our credits to eat at one Signature Dining restaurant per visit. They are supposed to be the best of the best restaurants Walt Disney World has to offer. These are the restaurants that take two Disney Dining Credits on the Disney Dining Plan, or four $$$$. Unfortunately, more often than not though, we are left incredibly disappointed at both the lackluster offerings and production.

First off, the value at Tiffins is terrible. The price of entrees run from $29 – $42 with one selection at $53. $35 is the average price for a one credit meal, but at Tiffins you can spend twice the Disney Dining Plan credits, but only receive a meal valued at one dining credit by Disney standards. That’s a bad deal. Plus, the only thing they have to drink, that isn’t alcohol, is soda. This irritates me beyond belief. Generally, I don’t drink soda. When I’m eating at a fast food restaurant, I don’t expect anything more, but if there isn’t a fancy lemonade, or a milkshake when I’m spending $53 on a chunk of meat, I get a little perturbed. To his credit, our server was able to mix a sprite with pineapple juice, and it was super yummy. But,… he couldn’t bring me more than one (couldn’t, wouldn’t, didn’t?, it’s all the same).

We started our meal off with the Black Eyed Pea Fritters. These had a good texture, but they were seriously lacking flavor. If I hadn’t been sweating out my life force in the hot Pandora sun for two hours in line and walking back and forth from Dinoland USA three times, I wouldn’t have eaten them. Plus, I waited 45 minutes for Gabriel to come to dinner. He had originally taken Eclair to ride Kilimanjaro Safari, but she fell asleep. He thought he still had enough time to ride it with her when she woke up before dinner, but grossly miscalculated. So, I was starving. These just weren’t good. I make a Black Eyed Pea Soup with bacon and pork, served with cornbread, and it’s delicious. I know how good Black Eyed Pea’s can be. Tiffins completely lost the essence of these wonderful beans.

Gabriel and I both ordered the $53 Wagyu Striploin and House-smoked Brisket because we were utilizing two dining credits. We wanted to get our money’s worth, and even still, this was a poor value. The meat came with two small potatoes and one fat green onion, yes, one. One long baby carrot, yes, one. And one piece of what looked like a purple turd, yes, one (this is probably something we can be thankful for). Gabe’s turd was actually yellow. It was probably a different type of carrot. In a different arrangement, this could have been appetizing, but sitting there practically alone on the plate, as if it had been discarded next to the meat that it likely came from…, that was just gross looking. The presentation was horrendous. It looks like they just used a ladle and dumped everything onto the plate.

The Striploin was cooked as ordered, and was very tender. It was really good, I will admit. Half the brisket was fat, which I guess some people like. I was still hungry at the end of the meal. We ordered both the twins the grilled seafood of the day which was salmon. It came with rice and green beans, which by my standards is not a full nutritional requirement. The meal also came with a soft bread that tasted like it was made from peas and coconut manna. It was interesting.

Dessert was better. The kids were both served a chocolate Mickey Mouse mousse, and Gabriel ordered the chocolate cake. I chose a lime cheesecake that had an exceptional flavor. It was covered in dried lime rind and was a nice compliment to the sweetness of the cake (shown above).

The ambiance is nothing special either. Disney claims that “dining inside Tiffins is like sharing a meal inside a renowned adventurers’ club: the theme of travel can be seen and felt everywhere you look. Hike your way through the rustic front doors and behold an enormous map of the globe, before unearthing 3 elegant dining rooms honoring the spirit of Africa, Asia and some of the world’s most exotic animals.” Um, is that what a ton of rectangular picture frames glued together represent?

The absolute beauty of Animal Kingdom is breathtaking. It truly immerses you in a world that is authentic and reverent towards the animals that it gives a home to. Tiffins is pretty, but it’s nothing quite so special. 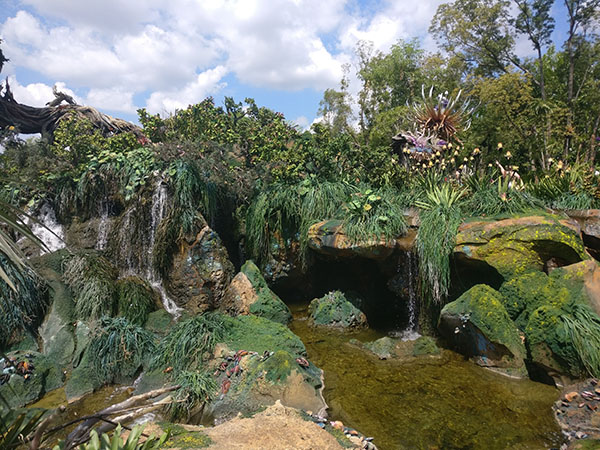 ► For Kids: Boring and expensive. Pass.

Have you dined at Tiffins, or any other signature dining at Walt Disney World? What was your opinion of the meal, the restaurant, and the value? I preferred eating at the quick service restaurant, Satu-Li Canteen in Pandora over Tiffins. We want to hear about the turd you were served too!

Check out our other Walt Disney World restaurants, and our take on the Disney Dining Plan!