Home Where Are We Going? Caribbean What No One Will Tell you About the Wave Hotel in Vieques,... 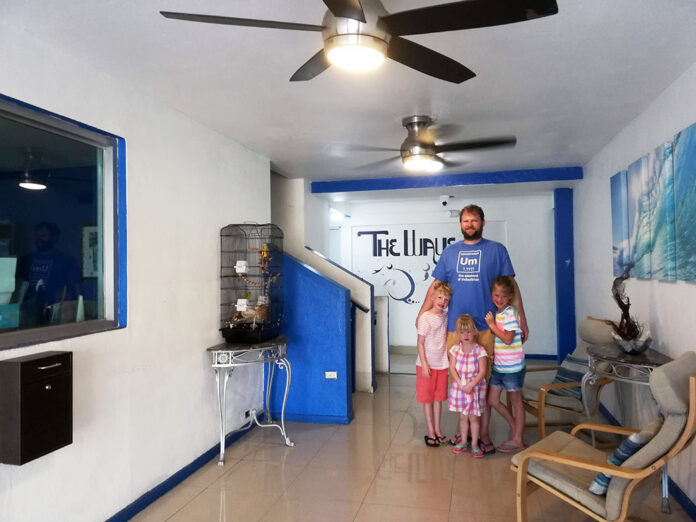 The Wave Hotel in Vieques doesn’t look like much, but it tells a story of brutality and resilience.

Hurricane Maria attacked the Caribbean in September of 2017, and left behind devastation for every single resident on the island. It destroyed businesses, knocked out power, tore trees from the ground, left power lines thrashing about in the streets, stripped rainforests bare and destroyed the brightest Bioluminscent Bay in the world.

It all but knocked down The Wave Hotel.

What No One Will Tell you About the Wave Hotel
in Vieques, Puerto Rico

Hurricane Maria tore through Puerto Rico, the Dominican Republic, and the US Virgin Islands. In conjunction with Hurricane Irma, Harvey and Jose that preceded Hurricane Maria, they collectively destroyed homes, ecosystems and families.

But no island was hit as hard as Puerto Rico.

As a Category 5 hurricane, Hurricane Maria’s winds reached 175 mph, and even though the storm downgraded to a Category 4 by the time it hit Puerto Rico the storm grew in size.

When our family arrived at The Wave Hotel in Vieques, 15 months later, we could still see the effects of the hurricane.

A beachfront propery, The Wave Hotel in Vieques is located on the north side of the island, just a short walk from the ferry dock and easily accessible by foot.

At one time you could walk directly out onto the beautiful beaches of Vieques from the patio adjacent to the pool, but Hurricane Maria tore electrical wires from their sockets, limbs from trees, and uprooted concrete stairs.

Only a few rooms at The Wave Hotel in Vieques are available for rent.

The Wave Hotel is owned by the local Subway, yes the fast food sandwich shop that is located in the basement of the hotel. The pool patio now houses construction materials for rebuilding The Wave Hotel, but for now, resources are going to the people of Vieques who lost their homes, their families, and their livelihoods.

The owner of the Subway franchise has been working with the National Guard to distribute goods and materials and helping rebuild the lives of those who need it most.

We were offered a nightly rate of $50 by the front desk clerk, including all taxes and fees.

The first night we stayed in a studio with two double beds and Miss Molasses slept in her carseat.

There wasn’t room for her in the bed, and there wasn’t even a dresser to makeshift a crib for her.

The next night we were moved to a one bedroom with 3 queen beds, a futon, a mini kitchen, and a balcony offering stunning views of the ocean stretching across the earth to meet the sun.

The Truth About The Wave Hotel in Vieques

What The Wave Hotel in Vieques lacks in appearance it makes up for in spirit.

The hot water was tepid at best, but the room and the sheets were clean, the beds were comfy, and the views were impeccable.

Wifi is spotty on the island, and cell service for us was nearly non-existent. This should come as no surprise considering Hurricane Maria knocked down 80% of Puerto Rico’s utility poles and all transmission lines.

Even the ferry terminal had to be moved on the island due to Hurricane Maria’s lashing and torrential rains that poured like a cauldron onto the island where water levels reached nine feet high!

The hurricane lasted for 8 days during which time wind and rain battered the island for more than 30 hours and claimed the lives of over 3,000 people.

The Wave Hotel is not your typical hotel. It’s better. It doesn’t offer flat screen TV’s with high definition and direcTV. It doesn’t have plush couches and extra pillows tucked away in the closet.

It has a history made up of not just the past, but current events happening right now.

Reasons to Stay at The Wave Hotel in Vieques

The hotel and the owners will teach you firsthand about devastation, turmoil, and survival.

► For Kids: What a great opportunity we had to show our children something more than just beautiful beaches and impressive jungles. We seized the opportunity to teach our children about what they felt was lacking, and why that mattered?

Don’t miss the bakery next door offering hot and fresh donuts and sandwiches each morning.

Our favorite part of the hotel, as always, is the pool. It is a great size with both a deep end and a wading area for little kids.

What makes it all the more special is that is looks directly out over the ocean and offers spectacular views.

Expectations for the Wave Hotel in Vieques

Yes, it’s likely The Wave Hotel did need some updating prior to Hurricane Maria.

Even still, it’s disheartening to read the reviews online of The Wave Hotel in Vieques, indicative of a culture that is closed off from the rest of the world. Forgetting all too quickly that Hurricane Maria crash landed on the island and tore it to pieces along with everyone on it, if they ever knew at all.

Considering many people on the island lived without electricity for almost 2 years, it feels a bit disingenuous and quite pitiful to complain about a lack of hot water.

► Nap-Time Version: Our family stay at The Wave Hotel in Vieques post Hurricane Maria on the island of Vieques learning about the devastation the tropical cyclone caused.

We were also fortunate enough to experience Bioluminescent Bay on the island, and learned more about how Hurricane Maria affected the ecosystem at Mosquito Bay.

Don’t miss our family’s favorite places to eat on the island, including Bananas Beach Bar and Grill and D’Frozz, the only ice cream shoppe on the entire island!