Home Are We There Yet? How Not to Rent a Car in Mexico with a Family |... 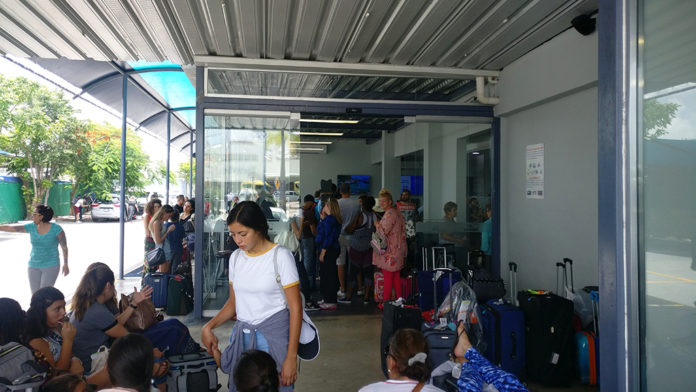 Should You Rent a Car in Mexico?

The answer is unequivocally yes! You will absolutely waste half a day in Mexico, starve your body of the required nutrients to survive in the process, sweat out your life force, and figuratively tear off the head of anyone who comes into your vicinity. But when the car rental process is over you’ll find that renting a car in Mexico will afford you incredible opportunities to experience sites outside of the region where you are staying, and witness and explore the mesmerizing landscape of Mexico. While we definitely make a case for hiring a guide to see some of the more popular sites, renting a car in Mexico will allow you to see and experience more of the local life that makes Mexico so abundantly rich in culture, history and gastronomy.

We booked a car in advance through Orbitz and chose the company Fox, partly to obtain the extra $750,000 insurance allowance afforded by Orbitz, and partly because you aren’t required to pay in advance. Our options were limited, and even though Fox didn’t have great reviews – neither did anyone else.

We could see the lines winding out the doors while we were still on the shuttle a block away. Luggage lined the streets and sweat pooled on the sidewalk from the throngs of people waiting in line to obtain their cars. We had been flying for over 12 hours. We took a flight from Utah to Fort Lauderdale and had a 5 hour layover before our flight to Cancun.

I waited in line for 15 minutes and all I accomplished was finishing a complimentary lollipop. The line didn’t budge. Gabriel waited with the kids in the adjacent building that was fortunately air conditioned along with dozens of other people trying to beat the afternoon heat. We switched places and he waited another 15 minutes only to see another shuttle bus arrive with more people to add to the enormous and heinous line.

Finally, I went outside to see what other options were available. I was approached by a Fox Salesman who tried to rent me a car even though I repeatedly told him I already had a reservation! Then a Hertz salesman approached me and offered me a better deal than the one I reserved through Fox, no lines, insurance included, and a playground for the kids!

We grabbed the kids and headed over to the much cleaner, air conditioned and pristine building across the street. There was a line, but it was only three people deep. How deceitful three people can be.

This line also didn’t move, and for a long 45 minutes I crept forward during which time another salesman offered us a “supposedly shorter expedited line” if we only paid an extra $45. Of course, it was our choice whether or not to continue to be tortured. I hate condescending salesmen.

We had now been waiting 1.5 hours and we still were nowhere closer to renting a car then when we landed.

Finally after an hour of waiting, behind just three people, with at least nine agents assisting customers, it was our turn to approach the counter. We had a slip of paper with the quote and made it clear we just wanted the car. I needed water. I needed to sit down. I needed a bathroom with locks on the stall where I wasn’t accosted five times while urinating.

At seven months pregnant, I legitimately thought I might have the baby before we finished getting a rental car in Mexico because it then took yet another hour to go through the entire process of the salesman asking us extremely tedious questions, and leaving the counter for 10 minutes each time we denied his up-sales.

Eventually, we made it out alive! But only to have to wait in line yet again! This time for the jockeys to go retrieve the car for us from a secret undisclosed location that was apparently miles away! Then began the laborious process of checking the car for dings, dents, scrapes, and scratches from previous drivers – of which the car was covered in. The best way to document it all was with a time stamped video.

At this point my feet were the size of elephants. I was dehydrated. It was over 100° in Mexico and if you are wondering where Gabriel was, he was manning the luggage and the kids and trying to figure out a way to expedite this whole debacle.

In order to avoid this mess on the way home, we were again condescendingly offered the opportunity to pay another $25 for an expedited return. How generous. Of course, we refused the snake oil. What were we met with? An agent who found it more important to leave me standing at the counter watching him pick YouTube videos instead of doing his job. That’s exactly why we arrived at the airport five hours in advance of our flight.

I vented my struggles on Twitter, and much to my surprise Hertz responded and asked for my reservation number. Of course, I provided it via Direct Message to keep my information private, which was the ultimate goal on their end. They didn’t care, because they told me privately what they could have told me publicly: “We’ll pass along your feedback.”

10 agents and three people! What kind of math is involved where it takes nearly four hours to sell someone a rental car? The kind where you you are being scammed, sold snake oil, trodden and beaten down until eventually you cave to the wills and demands of those who dangle carrots above your starving head charging an exorbitant amount of money for something that should otherwise be included.

► For Kids: The pros of renting a car in Mexico definitely outweigh the cons of having to lug your kids around on public transportation or pay a taxi for every little thing you want to do when Mexico is so full of adventures. But be prepared for the misery. For you, for them, and for everyone else around you.

We rented a car in Cancun on a previous trip when we stayed in the Hotel Zone and were bored to tears from staying at the resort all week. On that trip, we looked up a rental online and they delivered it to us! At the end of our rental period, they even came back to pick it up. If you are going to rent a car in the Cancun area, that is exactly what we recommend!

What is the best car rental experience you’ve had in Mexico? Who should we go through next time?

► Nap-Time Version: What’s it like renting a car in Mexico? For starters, you’ll waste the first day of your vacation being tortured through either Fox or Hertz Car Rental.

Be sure to check out Part 2: Driving in Mexico, plus all the fun activities we did during our trip from touring the ruins of Chichen Itza, Ek Balam and Coba to exploring local cenotes around the countryside!