Home Where Are We Going? Asia How Did I Get Pickpocketed in Japan? A Lost and Found Happy... 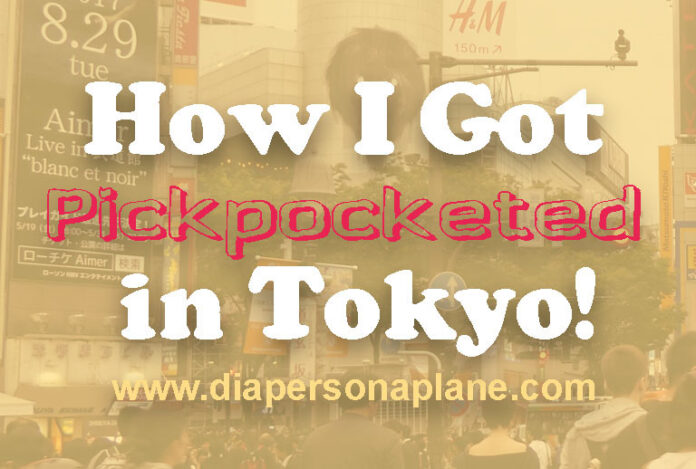 Shopping in Japan means having a bunch of cash on you at all times because hardly any business takes credit cards. So, what happens when you lose all your cash and all your credit cards in one fail swoop? What happens when you lose your wallet? How do find lost and found in a foreign country where you don’t speak the language? How do you find lost and found in Japan at all?

Well, lost might be too generous a word, but that is where our story begins: Our family was pickpocketed in Japan.

A couple days earlier we had been by the Don Quijote in Shinjuku East, because we had heard it was a great place for novelty items. Novelty for us means a huge selection of unique Kit Kat flavors you can only find in Japan.

We left as quickly as we arrived, children in hand, as we discovered they housed plenty of other novelty items we would have been happy to lose, and not found in Japan. However, since we hadn’t had much luck finding unique flavors of Kit Kat’s elsewhere, we decided to head back. We were lamenting the fact that we didn’t just buy the ones we had found at the nasty store on the cheap the first time.

It was the weekend and Don Quijote was shoulder to shoulder packed full of people. That was probably our first mistake, but we were on the tail end of our trip and running out of time. Our baby was asleep in the stroller and we didn’t much want the kids in there anyway.

I gave Catherine my wallet, full of cash we’d just gotten from the ATM, so she could run in and grab the Kit Kats. She put my wallet in her back pocket and headed in. I stayed outside with the kids.

Right? You can see where things are going.

While I was waiting for her I decided to head back across the street with the kids to the Game Taito Station. They had a whole bunch of brightly lit skill crane machines on the bottom level directly on the sidewalk. Since cash is king in Japan, my pockets were already full of coins so I let the twins take a stab at winning some Pokemon stuffed animals. In short order, Widmore was able to snag a large Pikachu stuffed animal. He was pretty excited! To this day, he still likes to take his Pikachu with us on our trips and sleeps with it at night.

After that, the kids and I headed back across the street. I was really surprised Catherine was still taking her time. After all, she was just supposed to be grabbing some Kit Kats. It didn’t seem like the lines could have been that long. I sent her some texts, which she mostly ignored or gave vague answers.

We impatiently waited, until…

Finally, she came out of the store with all her bags and had tears streaming down her face. She explained that somebody had stolen my wallet and taken all of our money.

At first I thought she must be joking because she was holding the wallet and all of the merchandise she bought. But, in some weird twist of irony, the thief had only stolen the cash and left everything else intact.

That’s why her shopping excursion had taken so long. The majority of her time was spent frantically trying to ask someone to help her. Help her find the thief, or find the wallet, or find lost and found in Japan. With some help from locals, she ended up finding the wallet on a shelf down an aisle she had never been down.

It would seem that some opportunist had used the packed store to their advantage, and pickpocketed the wallet while she was shopping. It wasn’t until she got to the counter to pay that she noticed it was gone.

We both lost and found my wallet in the same day.

We lost it in the Don Quijote in Shinjuku, but found it within the space of a few minutes with all the cards and licenses and important documents still in there. However, every single bit of cash, including some Chinese bills that I was waiting to exchange, had been swiped.

All in all, they got away with about $350USD. At least they were courteous enough not to take the wallet and cards with them. That’s right, I just referred to my thief as courteous!

Getting pickpocketed in Japan is supposed to be extremely rare in Japan. Japan is well known for being a remarkably safe place where things like this are so rare it is nonexistent. They probably don’t even have a lost and found in Japan. Thief’s are too nice; they just bring back whatever they are done using.

Japan is also one of the top 10 cities in the world for tourists. While the Japanese may not frequently pickpocket you can’t say that for every culture in the world. The vast number of people and tourists from every walk of life packed into downtown Tokyo creates a certain recipe.

My guess is that somebody saw us exchange the wallet outside and followed her in. It was a complete violation, but honestly, it could have been a lot lot worse. In all of our travels, we have only had something like this happen once before. Read about how we became victims of credit card theft in St Maarten without even knowing it.

This experience definitely falls in the #stinkydiaper category.

Lessons Learned From
Getting Pickpocketed in Japan:

► For Kids: Downtown Tokyo is a unique and exciting place. While Don Quijote is not a place I’d recommend bringing your kids to necessarily, the Shinjuku District is bustling and lively with lights that fill the air. Keep a tight grip on their little hands, and it’ll be a great experience. Make sure to check out the Godzilla peeking over the movie theater.

► What We Learned: In addition to everything mentioned above, we learned that even in the worst of experiences you can find a silver lining. Even though we were pickpocketed in Japan and had our wallet lost, we also found it again and nothing that couldn’t be replaced was missing.

Have you ever been pickpocketed in Japan, in any other foreign country, or even at home? Have you ever had a miraculous lost and found story? We want to hear about it!

► Nap Time version: Pickpocketed in Japan at the Don Quijote Shinjuku East. They took the cash but left the wallet with all the cards and ID’s resting on a shelf. Our Lost and Found Story in Japan has a happy ending, sort of.

Have fun out there travelers! But also, be careful.

Check out our review of the Kit Kat Chocolatory, and read about more of our adventures in Japan!

Everything You Need to Find the Best Attractions at Animal Kingdom