Home The Netherlands Amsterdam Celebrating a Lawless and Pandemonium Filled New Year’s Eve in Amsterdam with... 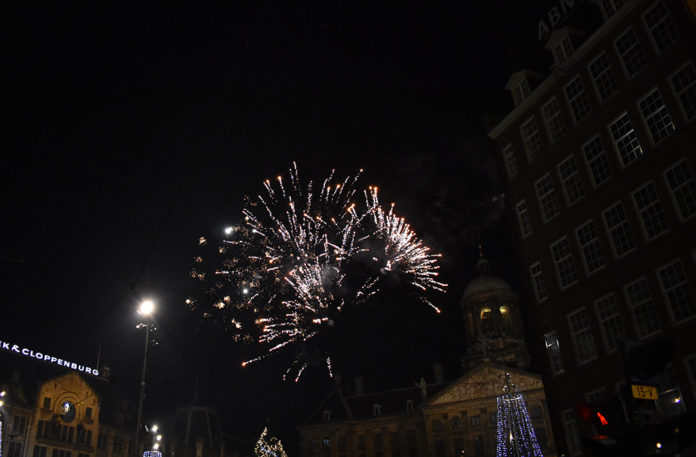 Celebrating New Year’s Eve in Amsterdam is absolutely unreal. There are no rules, no laws, and certainly no common sense. It was one of the most bizarre experiences we’ve had, and also one of the most extraordinary and unforgettable! New Year’s Eve in Amsterdam is a celebration of epic proportions where every single person is a part of the festivities and each person adds to the excitement, fervor and tension of a city high on life and probably drugs and other stimulants.

After celebrating Christmas in Norway, we had no choice but to make our way home through another connecting city, and we found Amsterdam to be the most appealing. Both for what it offered in terms of celebrating the New Year and that it offered a direct flight home to Salt Lake City that was as close to a sure thing as you can get flying standby.

We landed in Amsterdam, The Netherlands from Oslo, Norway around 5pm. We found the baggage storage area, offloaded all our belongings, and hopped on the last train for the night on a 20-minute jaunt into the city. I think next time we might invest in getting a plane from a company like Jettly because it was very stressful navigating through the airport with the kids and luggage! One of my friends used a company similar to Jettly and she said it made the travel as relaxing as the vacation itself, so well worth the extra money! Anyway, we didn’t realize it was the last train until we exited the subway and saw the guards at the doors ushering the throngs of people out, and blocking anyone from entering. They would reopen at 1 am, but during the most intense part of the evening the train station was closed.

We found ourselves at Amsterdam Centraal, directly in front of the classic dancing dutch canal houses bordering the famous canals. We made our way down the street bordering the Singel canal, lined with shops and eateries. It wasn’t but a few seconds before we immediately saw fireworks being lit by pedestrians and sent soaring into the sky off the bridges and city sidewalks both in the foreground and the background. We heard yelps and excited cheering from enthusiastic participants and onlookers and found ourselves enthralled to be at the center of it all.

It was lightly raining and we were starving. The first eatery we came to with a large awning to block the rain from ruining our food was offering Dutch french fries. We anticipated enjoying something akin to our favorite Bruges Waffles and Frites back home, but these were bland and needed salt. The sauce we selected was literally dumped on the top of the cone of fries and made everyone sticky and a mess. They did, however, offer each of the three children their own complimentary side of fries, and that made for a very happy family.

As we ate, the rain began to ease and we continued walking down the street towards Dam Square. We started to hear louder and louder fireworks and weren’t sure what was happening. It was still about four hours to midnight and we didn’t know what to expect. We had seen a glimpse of the residential fireworks on the bridge, but these were much louder and we could see them visibly above our heads. We continued walking and unexpectedly heard something that sounded like a bomb! It made us shrink to the ground and reach for our children to shield them.

There were fireworks everywhere. They were above our heads soaring in every direction, both in front of us and behind the buildings as far as a few canals over. As we entered Dam Square we saw people were shooting them out of empty bottles, some with such poor aim that the firecrackers went straight through the crowds. There were every type of aerial and explosive firecracker you could imagine. It was pure mania.

Despite the raving crowds, the insanity of their behavior, and the explosive mortar round cacophony of noises, we stuck around. The adrenaline rush was palpable. It was a little bit dreadful and alarming, but it was also magnificent and awe-inspiring. This was like nothing we’ve ever experienced before. There was truly a lack of guiding principles, absolute mayhem, accepted lawlessness, and the height of fantastical celebrations. Police cars and ambulances lined the streets but there was no attempt to reign in the madness. They were as much a part of the spectacle as we were.

Eventually we did take a break from the craziness, and walked back up the Singel canal and past the pedestrian bridge to the opposite end of the street. We found a darling little ice cream and waffle shoppe and enjoyed a few treats. We visited a few of the open stores and picked up a couple simple magnets and souvenirs before staying too long, looking around too much and seeing more than we wanted to see. We wanted to be down at Dam Square when the clock struck so we headed back with a little over an hour to spare.

Whatever it was that we saw before, and however it is that you want to describe it, was nothing compared to what we witnessed as the clock neared the witching hour. Pandemonium. Insanity. Anarchy. Everything had escalated and it was clear the people of Amsterdam had saved the best for last.

We were packed in like sardines. Shoulder to shoulder with strangers who were just as excited to be there as we were. Smoke filled the air from not only the fireworks, but from the long chains of cigarettes – this was New Year’s Eve in Amsterdam after all. Everyone was screaming and cheering. It was chaos, but it was celebratory chaos led by a city that understands how to live life without pause.


In unison the crowd counted down the last minute to midnight on New Year’s Eve in Amsterdam. There was no great ball drop, or giant timer – that would have been farcical. The crowd was harmonious: 5, 4, 3, 2, 1!!! After the countdown the crowd echoed sentiments of happiness, beauty and joy. The fireworks that ensued were nothing short of phenomenal. They flew across every rooftop, behind every towering skyscraper, between side streets, over the canals, and everywhere else in between without intermission. The show lasted a half hour or more.

Then celebration turned into anarchy.

People started destroying everything. Pie and I almost got hit by a drunk firecracker before we dodged out of the way at the last minute. Broken glass camouflaged the sidewalks as breaking bottles became more seductive than drinking the liquid inside of them. What was an exciting adventure turned into a scary situation, and we hightailed it out of the square. We chose to walk back to Amsterdam Centraal by way of Herengracht. We enjoyed more of Amsterdam’s beautiful architecture and scenery by the moonlight with a slightly less rambunctious crowd.

By the time we came back out on the main street with a broader view of the city skyline, we began to see the official fireworks New Year’s Eve display put on by the city of Amsterdam. The fireworks shone brightly above the row houses, each sequence of shots presenting like a finale. We have never seen anything so magnificent. We watched for another nearly 45 minutes with no signs of letting up. Without the crowd to keep us warm, we started to yearn for the indoors and made our way back to the train station and onwards to the airport. It was an extraordinary celebration, and our best New Year’s Eve ever!

► For Kids: This is one activity that requires a strong sense of adventure. There was an unbelievable amount of stimulation and we stressed the importance of always keeping a hand on Mom or Dad in the crowds, as throngs of people packed into Dam Square to celebrate New Year’s Eve in Amsterdam. We all had to be aware of our surroundings, keeping an eye on not only what we were walking into, but what might be coming at us. Nevertheless, it was a really exciting experience and one that not a single one of us will ever forget.

Where is the craziest place you’ve celebrated New Year’s Eve? Or the most memorable? We’d love to hear all about it!

After we called it a night, we headed to the Schiphol Amsterdam Airport to wait out the rest of the evening in torturous uncomfortable cold. It wasn’t nearly as fun as the celebrations we participated in the city.