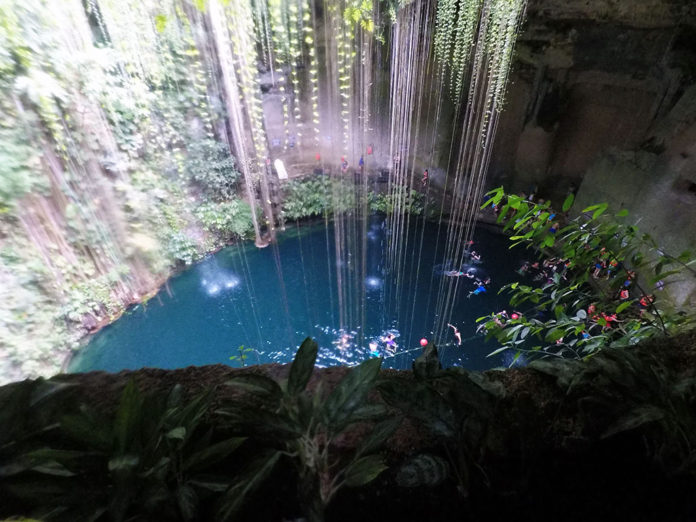 One of the stops during our guided tour with Alma’s LDS Tours was the cenote Ik Kil, even though our time was short. We spent a long time at Ek Balam and Chichen Itza with no complaints. The fascination of these ruins were too compelling to tear ourselves away, so we had just 30 minutes to spend the last few minutes of the day at Ik Kil. Turns out Ik Kil is equally as fascinating from both a geographical perspective and an anthropological one.

Ik Kil is an extraordinary creation. It is the result of a massive sinkhole that is fully open to the sky. The perimeter of the opening is just slightly smaller than the circumference at the water opening straight to heaven’s gate. It looks like it was chiseled out with perfect precision from the surface of the earth down the full length of the crater to create a perfect basin.

Though we didn’t get a lot of time to swim in the cenote, we loved every second! It was so much fun and offered such a one of a kind experience. Pie didn’t spend anytime swimming, she just ran up and down the stairs to jump into the water over and over again while Eclair spent the entire time trying to catch fish, or trying to make me catch the fish. We weren’t successful.


Originally, the sinkhole wasn’t open to the sun. Due to the calcareous geography of the Yucatan landscape, no rivers exist in this region of the world. Instead the water seeps into the ground and trickles through the ground creating aquifers which then form underground lakes. Ik Kil was one such underwater cave created by karst rocks. The moisture from seeping fresh water eventually dissolved the limestone and over time heavy rains softened the surface. Ultimately, it caved in revealing the lake bed beneath.

Translated, Ik Kil means windy place. Though the answer to why that is, is not apparent currently, it may have something to do with the fact that this cenote is alive and thriving. This is by no means a vacant hole. Ik Kil is full of lush green vegetation with vines, roots, plankton and lianas that sprout from the roof of the dome, the sides of the walls, and the ground below. The water is clear and home to a number of types of fish that share the cenote with the millions of annual visitors. You may even spot a toucan or parrot while swimming.

Ik Kil is located just a few minutes outside of Chichen Itza and is part of an eco-archaeological park. For the Mayans it is said that this sinkhole was known as the Sacred Blue Cenote for their civilization. When you view the cenote in person, you can see why. From the opening at the surface, the sun shines into the water and illuminates the surface with an ethereal green luminescence. Only Mayan kings were allowed access to the waters.

There is also a Sacred Blue Cenote on site at Chichen Itza, named Cenote Sagrado, and there is some dissension regarding which cenote was used for what purpose. Specific cenotes throughout the Mayan civilization were used as sacrificial pits for various reasons, but it is generally believed that Ik Kil was only used for sacred rituals by Mayan Kings. However, bones and jewelry have been found at the very depths of the pool.

To access the pool you must descend a spiral staircase to the water’s entrance. There are ladders to access the pool as well as various jumping platforms. The center of the cenote is divided by a rope, presumably to separate the diving side from the swimming side. The facilities on site also include restaurants, restrooms, lockers, life jackets, towels, shops and more.

► For Kids: This is an extremely unique cenote and one with a rich history. It is considered one of the most beautiful and perhaps the most famous. Kids will love entering the waters, jumping off the platforms, and swimming with the catfish.

Have you visited Ik Kil or any of the other cenotes in this region? We would love to come back again and again and again to see more of this phenomenal stretch of earth.

► Nap-Time Version: A short history of the famous cenote Ik Kil and our day spent swimming in the fresh waters of this underground lake.

Check out our reviews of Alma’s LDS Tours, who we hired for the day to both come here and tour Chichen Itza and Ek Balam, as well as our guide on Where to Eat in Playa del Carmen. 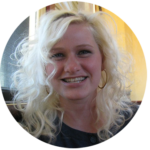