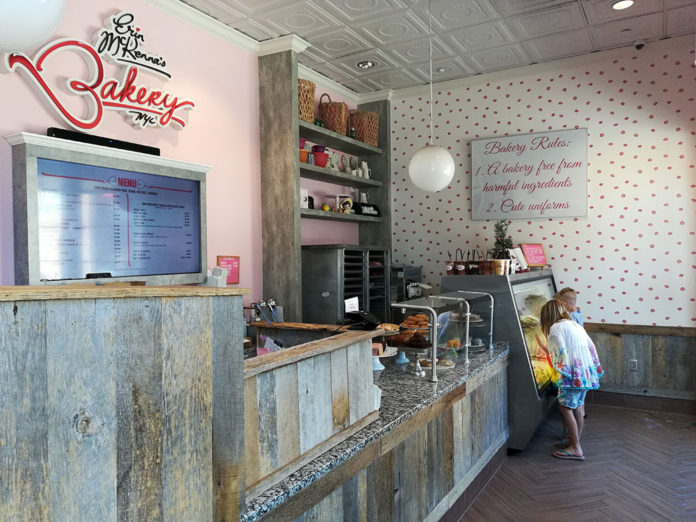 We were so excited to find this dairy free, egg free, gluten free, soy free and certified kosher bakery at Disney Springs. Even though our family doesn’t have any of these specific allergies as a life threatening condition, most of the above allergens are allergenic due to the fact that they are loaded with glyphosate residue from pesticide and herbicides, and that’s not cool. So, we couldn’t wait to check out Erin McKenna’s Bakery NYC! But the moral of the story is if you can’t make it without gluten, you probably shouldn’t make it at all.

Erin McKenna’s Bakery NYC is an adorable bakery covered in red, pink and white with a permanent Valentine’s Day celebration vibe and a super cute rule chart on the board. Sadly, the tone of the restaurant doesn’t match the theme and we felt no love from the unfriendly staff who seemed extremely annoyed we were waiting by the doors for them to open.

Everything in the case looked exquisite and extremely tempting and inviting. From brownies and doughnuts to cookies and cupcakes. It took a while to narrow down what we wanted, but ultimately we settled on a cinnamon roll, a slice of cake and a cupcake.

Our daughter, Pie chose the cinnamon roll. This is hands down her favorite treat in the entire world so it was quite an abysmal scene when she couldn’t manage to actually chew the bite she had taken. The cinnamon roll was so dry we all questioned if we were eating rocks. The dough of the cinnamon roll soaked up all the saliva in her mouth that it was nearly impossible to move her jaw up and down. I get that it had no gluten, so there was nothing to hold it together, but if you can’t make it taste good without gluten maybe you shouldn’t make it at all.

The cake my son chose at Erin McKenna’s Bakery NYC turned out to be red velvet cake. We say turned out, because the worker at the bakery told him it was carrot cake. Anyone could tell immediately it wasn’t carrot cake; there were no flakes of carrots. Between not wanting us there in the first place, and not knowing what type of cake she was serving, she clearly had no idea what she was doing there in the first place. The cake did look beautiful covered with frosting roses, but tasted pretty rough. It didn’t taste like carrot, or chocolate, or vanilla. I’m not sure what it was besides void of eggs and flour.

The cupcake was the one saving grace. It was really moist, and actually quite good. Our entire family kind of fought over this treat considering how bad the other two items were. That’s probably because it was vegan and cooked with canola oil which is harmful despite the sign on the wall that says free from all harmful ingredients.

► For Kids: Pretty in pink, but Erin McKenna’s Bakery NYC doesn’t taste as good as it looks. If you are a family that does require avoiding certain allergens, stick with the cupcakes. They are pretty tasty!

Does anyone know of an organic bakery? Organic flour and sugar would be a great start!

► Nap-Time Version: Checking out Erin McKenna’s Pinkalicious gluten, egg, soy, and dairy free Bakery NYC in the heart of Disney Springs that looks a whole lot better than it tastes.

I actually kind of prefer Goofy’s Kitchen. I’m a sucker for those giant Mickey Mouse shaped chocolate chip cookies with the ears coated in chocolate!