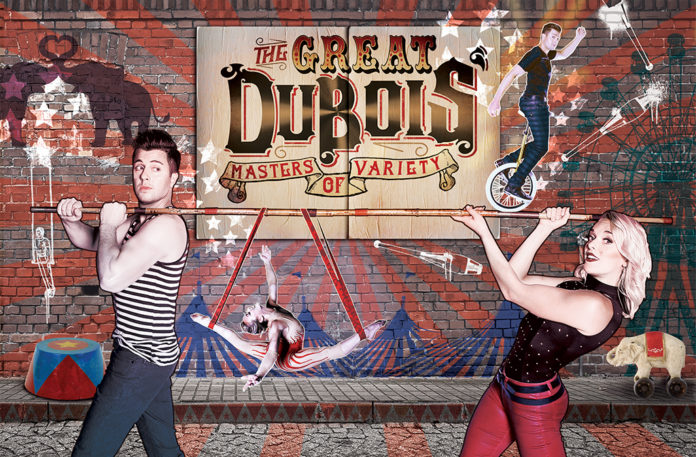 The Great Dubois is a throwback to the era of Great Variety Shows. An act that includes plate spinning, juggling, contortionism, acrobatics, aerial circeau and unicycling. Not just unicycling, but unicycling on a tight rope!

Come One Come All!
Step Right Up to See The Great Dubois:
Masters of Variety
Family Review of Circus Act
Featuring Michael Dubois and Viktoria Grimmy

Michael Dubois and Viktoria Grimmy put on a dazzling display of showmanship that includes twisting, turning, flipping, throwing, twirling and even falling. They perform at local theaters, performing arts centers, colleges, and even cruises.

That is where we were thrilled to watch the Great Dubois perform – aboard the Disney Fantasy Cruise Ship sailing through the Caribbean. We were captivated watching incredible feats of acrobatics, brave and daring feats of calisthenics and coordination, and especially Grimmy’s dazzling aerial dance routine!

Wherever you are, if you have a chance to see The Great Dubois perform, don’t miss the opportunity!

Why is The Great Dubois the World’s Most Unique Duo Circus?

Michael and Viktoria both display good natured wit, personality and charm. They each possess talents they have mastered to the point where it doesn’t even look like they are trying. They appear to be having as much fun on stage as we are having watching them.

They are so fun!

Michael Dubois began his juggling career as a 12 year old child and remembers watching Variety shows with his grandma.

He continued honing his skill in college at Penn State, accrediting learning more from clubs and groups than university classes. This is a man after my own ideals!

His act is fun, traditional, and ends with a sensational bit where he rides a unicycle while wearing a straight jacket and attempting to break free.

Viktoria Grimmy comes from a five generation family of acrobats and is considered one of the top acrobats in the country. Her family hails from Russia and she performed in her first circus at the age of three!

She has an flirty and captivating smile that lends to her whimsical talents.

She ends the show with a mesmerizing act where she climbs up and down the stage vertically! Utilizing only a large ribbon, she twirls up and down with only her superior arm and leg strength to support her as she hangs 50 feet off the ground!

Before They Were The Great Dubois

After winning the talent show at Penn State his junior year of college, Michael graduated in 2004 and immediately went to work as a full time performer.


Then Chelko and Dubois met Viktoria Grimmy. Perhaps a little jealously was involved, maybe a little envy, but I can’t find any more information about the trio than an old Myspace photo showing the three of them together.

Chelko left the spotlight in 2009 and went to work behind the scenes, first as talent coordinator on The Tonight Show with Jay Leno and then as a producer for a variety of shows.

Dubois continued his act alone, and renamed his performing arts show to become the Solo Circus; juggler, ringmaster and magician.

They are a couple both on and off the stage; explains how they work so well together!

Well that was fun!!! #TheGreatestShowman ❤❤❤

Learn From the Master

Not only can you find the The Great Dubois on the Disney Cruise Line as the featured nightly entertainment, but throughout the cruise the two will also hold classes on the basics of learning how to juggle.

Michael’s classes go through the way to throw the ball, starting with just one at a time, building all the way up to three. He provides the balls and the instruction.

It was super fun for our kids to take an opportunity to learn from a master, and to see Michael and Viktoria on our level, as friends, and not just performers.

Okay, the ribbon dance was done by a pretty awesome dad, but he surely was a kid at heart.

Our kids were mesmerized by Viktoria and her ability to transform on stage in the air! They’ve been hanging in doorways and leaping across beds ever since to test their own strength.

► What We Learned: Being successful at something doesn’t have to mean climbing the corporate ladder. You can discover what you are great at and work hard at what you love to create your best life.

Have you ever been to the circus?

Disney Cruises offer a plethora of entertainment options! We also loved Hector is Magic and the original Broadway show Twice Charmed, both found on the Disney Magic Cruise Ship!