Home Play Time Culture Planning Your Family Budget in Iceland | The Value of the Króna...

The local currency in Iceland is the króna, kr or ISK. Similar to all Scandinavian countries which utilize a version of the krone. Króna translates to crown, a nod to declaring autonomy in 1885 by printing their own banknotes, and ultimately gaining independence from Denmark in 1918.

Iceland is no stranger to the trouble with its currency. From its long standing historical bout with inflation to bankers who committed market manipulation and fraud, Iceland has struggled with maintaining the króna’s value.

The crash of 2007 wasn’t the first time Iceland figuratively became the land of fire and ice. In 1922 the króna was devalued and had to standardized against another currency. In 1981 the currency in Iceland was reevaluated again and the old 100 króna ISJ became the new 1 króna ISK. By 1986, 5,000 króna banknotes began circulation as a necessity due to rising inflation. Leading up the financial crisis of 2008, the króna was considered overvalued against the world economy yet again. In the three years between 2007-2010 the value of the króna against the US dollar dropped $169.06.

There has been talk recent of fixing the currency against the Euro. In 1922 it was first pegged against the Danish krone, then against the British pound in 1922, and in 1939 the US Dollar for the next 10 years. So far, the push to peg the króna to the euro has been rejected. The adoption of the Euro is seen as mostly negative, and in March of 2015 it was stated that no changes to the króna would be made in the foreseeable future. 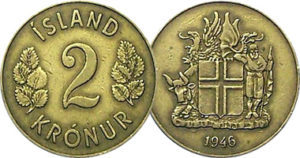 Iceland is expensive. From food to lodging, at least most natural attractions are free or reasonably priced. Everywhere in Iceland accepts credit cards, and there is no need to carry any local paper or coin currency in Iceland. Some establishments in Reykjavik will accept US banknotes, and Euros as well.

Check out our other experiences all over Iceland, including celebrating Christmas in this wonderful country!